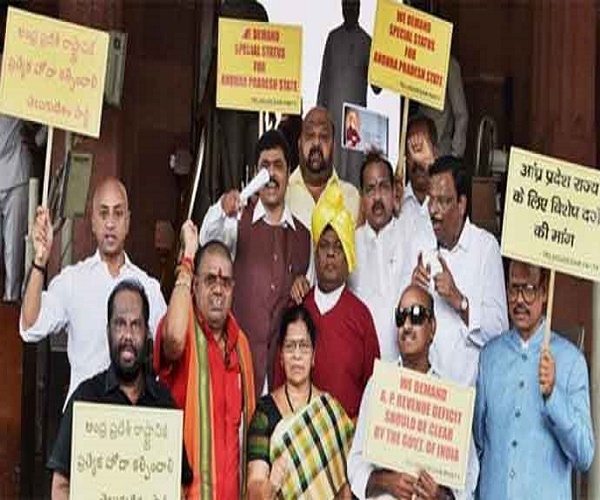 The protests by Opposition parties in the second leg of Budget session are indicative of the tumultuous days ahead.

It’s easier to fool people than to convince them that they have been fooled. This is a quote often attributed to Mark Twain, though there is little evidence to support the claim.

However, it appears that the BJP and their allies are inspired by this quote when they make electoral promises which they cannot keep, or perhaps do not intend to keep. And when people begin demanding that the promises made are honoured, they resort to enacting the theatre of the absurd.

As the second leg of the Budget session resumes, the protests by the Opposition parties over myriad issues are indicative of the tumultuous days ahead. The chief bone of contention is the injustice meted out to the state of Andhra Pradesh.

The genesis of the flashpoint can be traced to the Andhra Pradesh Reorganisation Act, 2014, under the Congress-led UPA government. Despite extending support to the bifurcation of Andhra Pradesh, (vide letters to the president of India), both the TDP and the YSRCP protested against the act. Today however, they are agitating for the same act to be implemented in letter and spirit.

However, after forming the government, the BJP-led NDA dragged its feet over the implementation of the Andhra Pradesh Reorganisation Act, 2014. When people questioned them over the special category status, it was claimed that the promise cannot be honoured due to a “technical problem”, (implying that that their knowledge of administrative procedures are minimal).

To pacify the rising anger in the people, a special package was announced in 2016 by the central government, which was instantly welcomed by the state chief minister N Chandrababu Naidu. Yet, none in the media had the courage to question why promises that could not be implemented due to “technical reasons” were made ad nauseum during the 2014 electoral campaigning. The tragedy came a full circle when even the promise of a special package wasn’t honoured.

Meanwhile, the Congress which was consistent in its demand for implementing the promise of special category status for Andhra Pradesh, upped the ante and in June 2017 Rahul Gandhi visited the state. While leaders of 14 parties expressed their solidarity at the Congress-led Pratyeka Hoda (special category status) Bharosa Sabha, held in Guntur, the TDP held black flag protests against Rahul Gandhi who came to address the gathering. It is ironic that less than a year hence, the TDP is attempting to peculate the ideas of the Congress.

Meanwhile, the TDP claimed that though it is protesting for the special category status, it will continue to support the BJP. The dissonance in their words and actions notwithstanding, the NDA coalition can take solace in the fact that our political system doesn’t have a mechanism to audit the achievements of parties based on what they promise in their manifestoes.

And in the absence of such an apparatus, promises are made to win the support of people, who are eventually bamboozled.

Perhaps we must ponder over enacting such a law, on the lines of the Fiscal Responsibility and Budget Management Act, so that reckless promises are not made during elections, only to be not implemented due to “technical issues”. Sadly, even if civil society demands such a law to be implemented, all parties are likely to agree, but it shall never see the light of day – much like all parties claim to support the women’s reservation bill (which they will reiterate on March 8), but it never gets passed.

And much like all parties in Andhra Pradesh support according it the special category status but feign helplessness due to “technical issues”. #KhabarLive

‘Housing For All’ Means Nothing For India’s Migrant Workers

What Made ‘Kavita’ To Become MLC From Nizamabad?