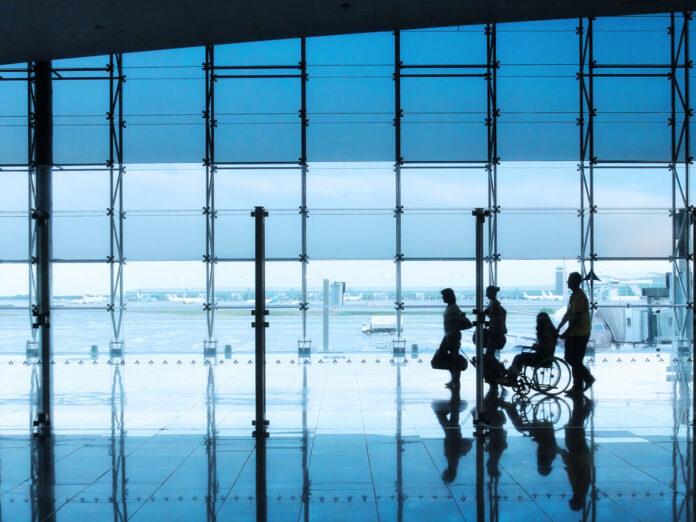 About a week ago, Smita was traveling from Mumbai Airport’s T2 terminal. “Are you a woman?” came the question at the security check, as it had so many times before. Weary of having to explain herself, Smita took to social media to narrate her ordeal. “One time, I was asked for an ID card inside that little booth where they scan women,” she tweeted.

“Three times, I was groped in the name of security. Their hands lingered precisely on my chest, checking for the presence of breasts, not bombs. I kept pointing at my prefix on the boarding pass, but apparently that wasn’t proof enough […].”

Smita, a researcher at Point of View, a Mumbai-based non-profit that amplifies women’s voices, is a non-binary person. This means that she identifies outside of the man-woman binary. They use the pronouns he, she and they interchangeably. And their experience at airports is by no means an isolated one.

Many people responded to their Twitter thread, narrating their own experiences of being treated in an undignified manner when they did not conform in appearance to the conventional male-female binary.

One of the people who responded to Smita’s thread was Nadika, a writer who is a transgender woman. “I can’t tell you the number of times airport security have groped my breasts even while trying to pass for a man, (standing in) men’s lines,” she tweeted. And once, while she was presenting traditionally ‘feminine’ and asked to be in the women’s queue, there was derision and hate from other passengers and staff, she says.

Speaking to #KhabarLive, Nadika narrates another horrifying incident. She was presenting as what is considered conventionally masculine and standing in the men’s line at an airport, when she was stopped because the metal detector beeped while scanning her. “It was because of underwire in one of my clothing. They made me take off my clothes to check,” she recounts.

“There are a few times I have tried to explain that I am transgender. Once at an airport, I had to wait to explain to two officers what it meant. I have had to explain why I am transitioning, the process, the politics. They understood eventually, but why should I have to explain my life story just to pass through?” she asks.

Smita points out that things get difficult for queer persons in gendered spaces. Apart from being asked things like “Are you sure you are a woman?” there have been incidents – not just at airports, but at malls, and once in a bank – where Smita was physically pushed out of the women’s restroom. “Saying that I am a woman makes me uncomfortable too, so, often, I don’t respond. In washrooms, the attendants, and even other women, are quick to point out that this is the women’s toilet. When I raise my voice and say I know, they usually stand down. But they keep staring,” she says, “They don’t realise how aware we are when we navigate these spaces. If it was a man who accidentally entered a women’s loo, wouldn’t he leave himself?”

Not just queer persons, there have been a number of reports in the past about persons with disabilities being mistreated by the Central Industrial Security Force (CISF) officials who handle airport security, and even airline staff.

Take the experience of Jeeja Ghosh, who has been working in the social sector for many years. The consultant on disability and gender has cerebral palsy and uses a wheelchair. In 2016, Jeeja won a suit against private domestic airline Spicejet. The carrier was ordered by the Supreme Court to pay Jeeja Rs 10 lakh in damages for forcibly deplaning her in 2012, claiming there was blood or froth on the sides of her mouth – a claim that Jeeja vehemently denied. The court said that no doctor was summoned to examine Jeeja, and she was not given “appropriate, fair and caring treatment” before being deplaned.

As recently as last month, Jeeja was initially told by a GoAir attendant at the Kolkata airport that she could not travel unescorted. While the person at the check-in counter apologised when Jeeja and her companions pointed out this was discriminatory, Jeeja tells #KhabarLive that being denied a boarding pass unless she has an escort for the entirety of her journey, is the most common problem she continues facing.

Meanwhile, polio survivor Kuhu Das, who was also traveling with Jeeja, was told that she would have to remove her callipers, a metal support that she wears on her legs, by the security officer in the frisking booth. Kuhu could not have done so without removing her trousers. Kolkata airport later tweeted an apology to Jeeja and Kuhu for the treatment meted out to them there.

Meenakshi Balasubramanian of Equals Centre for Promotion of Social Justice has had similar experiences. A wheelchair user, she was also asked to remove her callipers at the Chennai airport last month while traveling to the Philippines. “They asked me to remove my lower garment and take off the callipers. So I asked them to provide me with a safe, private, and dignified space to do so. I wasn’t going to take off my pants with just a screen where anyone can look,” Meenakshi says. Eventually, they just let her go without further checking.

Apart from this, Meenakshi has also been asked to get up from her wheelchair for screening. Then too, she has to ask for a firm chair to sit on while her wheelchair is scanned. “But in other countries, I have not been asked to get up from my wheelchair. They use explosive trace detectors (ETD) and hand patting to check disabled persons.” Further, she has also been told to use the airport wheelchair instead of her own at the airport. “It’s like asking you to remove your legs and use another pair to walk,” Meenakshi says.

Incidentally, in 2017, the CISF had decided to end the exercise of making persons with disabilities remove their prosthetics, and making passengers get up from their wheelchair for scanning, except in select and suspicious cases. CISF had decided instead to use ETDs and visual profiling, and train its personnel in these. This was reportedly done to ensure that passengers don’t “face any humiliation or uneasiness” while traveling through Indian airports.

However, the experiences of those like Jeeja and Meenakshi show that this hasn’t really translated to reality. The frequent and unpredictable nature of this humiliation and harassment has meant that these travellers spend a lot more time and resources in mitigating circumstances they can hardly anticipate.

The anxiety, apprehension and the preparation

There have been times that Nadika has tried to present herself as ‘neutral’ as possible in order to be able to pass through airport security. “Among other things, I end up double checking everything, making sure that I am not accidentally wearing something that might cause the metal detector to beep. I’m afraid of passing through any border check or police. I refrain from talking back or responding, and am very careful about how I come across to people.”

Conducting herself differently was something Smita considered too. “There were points when I wondered if there was something I needed to change in myself and how I come across, which triggered dysphoria (deep unhappiness and unease felt by trans and non-binary people because of the way the society perceives their gender) for me,” he recounts. However, after speaking to others in the queer community, Smita realised that it didn’t matter how he presented himself – the harassment and suspicion was directed towards him regardless.

All these things significantly add to apprehension and stress before travelling. “Whenever I have to travel, I am worried about what I will be facing that day. I want to do everything right from my end – I am extra clear with my information and communication. But almost every time, there is a new issue,” Meenakshi shares.

Meenakshi adds that those with disabilities often end up paying extra to ensure they have accessibility. For instance, wheelchair users need ambulifts in the absence of a ramp to board the aircraft.

However, most airlines, except Air India, charge extra for it – upward of Rs 2,000, Meenakshi says. “Many times, even if you mention it while making the booking, some airports may not have the ambulift. Our choice of airlines becomes limited,” she adds.

Both Meenakshi and Smita say that how their travel goes depends entirely on who is on duty, and how sensitive those individuals are. For instance, some airport officials had come to recognise Smita at the domestic airport in Mumbai due to her frequent travel for work, and when they were on duty, things were easier.

Many people with disability do not know their rights, unless they have been part of the disability rights movement, so they unfortunately tend to get mistreated. “Because I know about ETD, I will ask for it. But many others with disability are not aware, and so they don’t even question the mistreatment,” Meenakshi says, “It is a compromise of dignity almost every time you have to travel.”

#KhabarLive contacted CISF to find out if they train airport security officials in how to appropriately deal with disabled persons, and gender non-conforming, queer and trans persons at airports.

An official tells #KhabarLive that they do have trainings, and standard operating procedures to follow for disabled person. However, when it comes to conduct towards LGBTQI+ persons, there is only a “briefing”. “There is no training specifically for dealing with LGBTQ+ passengers,” the official says.

He adds that cases of discrimination and undignified behaviour with queer persons are more at metro stations, and not as much at airports. The official also says that negative experiences – such as those of Meenakshi and Jeeja – are not common.

However, the situation on the ground seems to indicate otherwise, as is illustrated by the number of media reports that appear if you just run an internet search for “disabled persons harassed at airports”. Even if there are trainings, Jeeja says that these need to be regular, and have refreshers, not just for CISF, but also airline staff. “The training module and actual training sessions must be monitored by the disability sector,” she states.

Across the board, there is agreement that security should not be a pretext to treat people in an undignified manner. Meenakshi says that this should not be seen as just an issue for certain communities or groups. “The problem is that facilitating accessibility and dignity for the disabled is seen as a welfare measure, when it should be seen as a human rights issue.”

Technological solutions can also be looked into “to mitigate unnecessary harassment” while ensuring security, Jeeja suggests.

Smita says that while gender-neutral lines for airport security checks (as is the case in many other countries) might help, they understand why Indian women may not want to be frisked by men. Nadika agrees. She adds that officials need to be sensitised not to view the LGBTQ+ community with suspicion without reason.

“Sensitisation is definitely needed. Touching and groping is not necessary for ensuring security. People also need to ask, not assume,” Smita asserts. #KhabarLive

‘Aadhar Leak In AP Confirms Violation of Citizen Rights: ‘Not By...