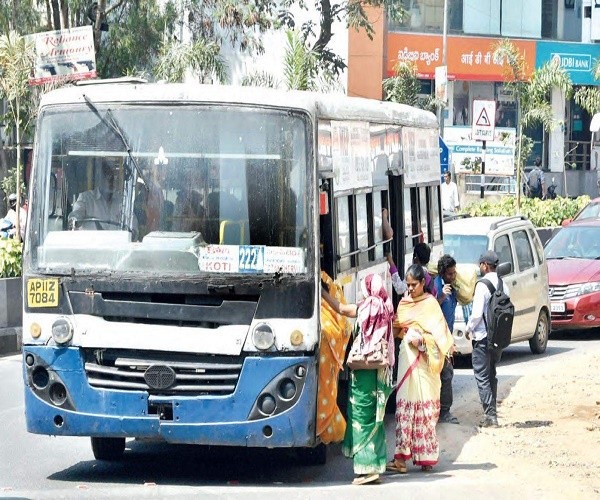 For commuters waiting for a Telangana State Road Transport Corporation (TSRTC) bus at a bus stop away from the main bus routes, there is a very little respite from the summer due to the lack of adequate bus shelters. To solve this problem, the Greater Hyderabad Municipal Corporation (GHMC) is planning to set up 826 new bus shelters in the city. Twenty such pilot bus shelters are expected to be ready for inauguration by April 10, but commuters ask where?

Take for instance the bus shelter next to MNJ cancer hospital at Red Hills, located on an unusable footpath that has now been dug up. “There is a shelter but it’s not usable, so people have to stand on the road. The buses don’t come on time so you have to wait on the road till the bus comes,” said Sharadha R who is doing house surgency at Niloufer hospital, “Most of the better bus shelter facilities are in Hi-Tech city and Gachibowli, go to Vanasthalipuram or to Falaknuma locality and you won’t find any bus shelters,” she says.

While the current status of bus shelters is endemic to most interior locations serviced by TSRTC, efforts to set up the same in the city is not new. In 2016 also, tenders were floated but no bidders took up the project. The 826 bus shelters for which tenders were won by three advertising firms in January 2018 were actually proposed first two years ago by TSRTC. Only a few bus shelter locations were shifted.

“Advertising agencies would not be interested in setting up bus shelters where they can get no revenue. Ideally, there should be one bus stop for every 500 metres. In the Indian context, most inner city routes have stops every 500 metres,” said GRS Chaithanya, “The distance increases as you start going outside the city. But you don’t have places to stop buses everywhere so sometimes it depends on availability.” he added.

“It’s not correct that the new shelters do not cover the interior parts of the city.The new bus shelters coming up do adequately cover the city and there is data to support this,” said Adwait Kumar Singh, GHMC additional commissioner, advertisement department. “We are making 12 pilot bus shelters and works on them are underway. They are likely to be inaugurated by April 10,” he added. #KhabarLive