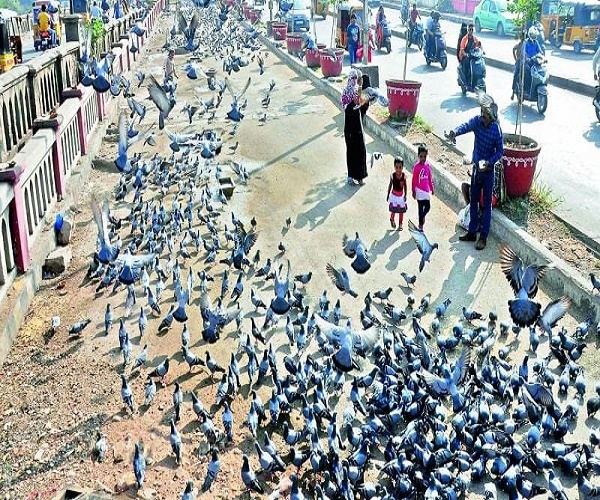 Pigeon droppings and feathers are unhealthy for humans and also spread viruses to other bird species. Hyderabad city nested with lakhs of pigeon species on old and new buildings, complexes, towers and old havelis.

The pigeon population in the city has exploded and pigeons are becoming quite a menace. Birders, experts and veterinarians suggest a ban on public feeding of the birds.

Pigeons can be seen everywhere in the city. They have stopped searching for natural sources of food and depend on being fed by citizens. A Telangana forest department official says in the name of helping the birds, citizens are feeding the pigeons and damaging the ecosystem unknowingly. “The over population of these birds is dominating other bird species. We can see that the spaces occupied by the pigeons were earlier used by other birds.”

Space, habitat, feed, water, protection and climate determine the population of any species in nature. But, if we start feeding an animal or bird, they will become assured of food irrespective of environmental factors, and tend to multiply faster, exceeding the natural carrying capacity of the area.

“The primary feathers of the pigeon are very small and can be inhaled through our nose. These feathers can cause respiratory problems in humans. The pigeons are spoiling the environment with heavy population. The government should ban feeding of pigeons or else it will not be possible to control the population,” said senior veterinarian Naveen.

The reputed bird watching society, Deccan Birders, admits that the pigeon population has turned into a menace. Secretary of Deccan Birders, Shafat Ulla, says a ban on feeding pigeons must be imposed and that pigeon droppings affect the health of humans.

“There is a ban on feeding pigeons in several countries and there is nothing wrong in it. The government should initiate the ban in the city. Noticing that the pigeons are fed at KBR Park, we Deccan Birders have organised an awareness campaign. We can see people feeding them across Hyderabad,” Shafat Ulla said.

ALSO READ:  Despite Stringent Laws, Many Duped In 'Lucky Draw Scam' Of Hyderabad

Dr Aftab Ahmed says pigeons can cause diseases through their droppings. “If we take water that is contaminated with the droppings of the pigeon there is possibility of Histoplasmosis and Cryptococcosis. The disease mainly affects lungs and other body parts with fungal infections.”

Though the GHMC does not consider the pigeons a menace, its workers have a tough time cleaning the droppings.

“So far it has not been brought to our notice as a major menace. But, yes, bird droppings do contribute to street waste in the city,” said GHMC Additional Commissioner N.V. Ravi Kiran. #KhabarLive