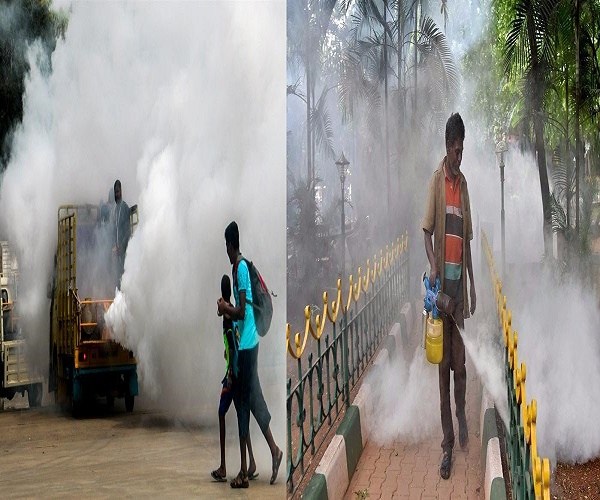 As the dengue scare continues to plague residents of Hyderabad, it has come to light that the Greater Hyderabad Municipal Corporation (GHMC) could have used a more effective pesticide in place of the one currently being used to control mosquito populations. And the GHMC is using the banned perstisides DDT to combat the mosquito menace and control the killer disease Dengue.

With a spike in the number of reported dengue cases, officials from the GHMC are turning to dichlorodiphenyltrichloroethane (more commonly known as DDT), to fumigate public spaces. This chemical compound has been banned in several countries due to various risks it poses to the environment and health. DDT is banned for agricultural use in India, however, it continues to be used for fumigation against mosquitoes in several places in India, including Hyderabad.

A partial ban on DDT was introduced in 2008 wherein it could not be used for agricultural purposes. According to Dr Ram Babu, Chief Entomology Officer from the GHMC’s Entomology Department, it was at this time that the then undivided Andhra Pradesh government had stopped the use of DDT for fumigation, noting an increase in the resistance to the chemical in mosquitoes.

“But there has been a significant enough gap for the current population of mosquitoes to have lost the resistance against the chemical. So, now we are turning to DDT as it has been found to be effective in controlling mosquito populations,” he adds.

The World Health Organisation (WHO) released a report based on research done between 2010 and 2016, which showed the efficacy of different pesticides which were being used globally against mosquitoes. As part of this, it was evident that a large number of the mosquito populations were not responding to DDT.

Scientists have attributed the resistance to DDT to a genetic mutation in the mosquitoes which renders the chemical ineffective against the insect.

“This mutation essentially enables a mosquito to break down the chemical DDT into a non-toxic form, thereby making it useless as a pesticide. Every few years, with the natural selection process, there will be some changes seen in the mosquito population, which is why we must change the insecticide we use,” explains Dr Ram.

He notes that since there has been at least a seven-year gap since DDT was last widely used, many mosquitoes would no longer be carrying the resistant gene.

This still doesn’t address the issue of the risks posed by DDT to people and the environment. Keeping this in mind, several states are looking at alternative pesticide options. In Bengaluru, for example, the Bruhat Bengaluru Mahanagara Palike (BBMP) first used organic compound pyrethrin in place of DDT and have now switched to malathion.

In September 1962, American biologist Rachel Carson published a book called Silent Spring which chronicled in detail the environmental and health risks posed by the use of DDT. The compound had been viewed as a boon by many as it was incredibly effective against hundreds of different types of insects, as opposed to the previously used compounds which specifically target just a few insects. However, Carson also pointed out that several animals and birds died in large numbers as the result of DDT poisoning. There was mass outcry following the release of her book which led to the chemical being banned for the first time in 1972 by the US Environment Protection Agency (EPA).

Several countries followed suit shortly, with countries finally convening in 2004 at the Stockholm Convention on Persistent Organic Pollutants (POPs). It was here that many nations came to the decision to ban DDT use. However, they did add that developing countries, which largely relied on DDT for controlling mosquito populations, would be permitted to use the compound only for the purpose of controlling vector-borne diseases.

In August 2018, India banned 18 pesticides. However, the country has yet to enforce a complete ban on DDT. This largely has to do with the efficacy of the compound in controlling mosquito populations. While the countries that met at the Stockholm Convention have been pushing for a widespread ban on DDT, globally, this is being met with resistance from several other countries (including India), who rely on the chemical for vector-born disease control. #KhabarLive

A Fatal Blow To The Indian Judiciary