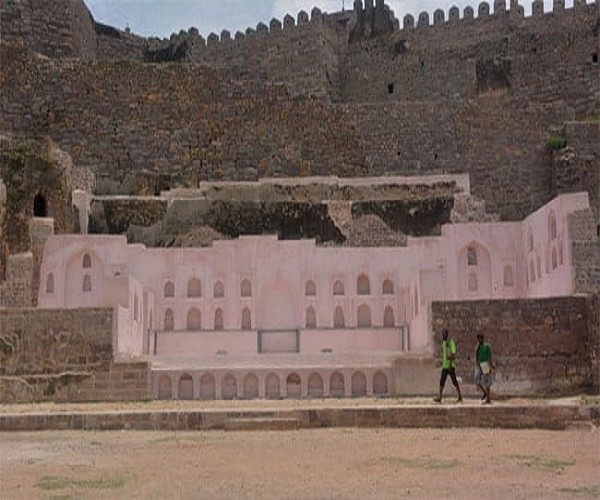 A visitor to the Golconda Fort these days is perplexed as monuments in bluish pink, white and sand brown greet him. The custodian of the Golconda Fort, the Archaeological Survey of India (ASI), which has been repairing the monuments has no clue why each one looks different from the other. While the effort to restore the monuments inside the fort is laudable, the structures are not in sync with the historical fort.

The Nakkar Khana is dyed with blush pink, Darbar Hall in white and Taramati Mosque in sandy brown. For the material lime is prepared at different times with difference in the contrast of ingredients results in different shades of colors. At first, damaged fort walls were being restored by plaster and granite followed by monuments at the site.

Unlike the lime plaster of Qutub Shahi Tombs these newly washed monuments of Golconda fort is a pale shadow of its former self. P Anuradha Reddy, city convener for Indian National Trust for Art and Cultural Heritage (INTACH) said, “The material prepared at every stage will be different, since the old lime wash material cannot be replicated. Also, each monument ages differently and the vagaries of nature take a toll.”

A few conservation architects say that the work undertaken by the Aga Khan Trust at the Qutub Shahi Tombs cannot be compared with the work being done at the Golconda Fort by the cash-starved ASI. The Aga Khan Trust is spending crores of rupees and looks into every minute detail.

Hall of justice is a two-storied building located at the summit is rich and elegant structure blending with magnificent ceiling and refined walls which was severely damaged by the graffiti and scribbling by the youth of recent decades. ASI decided to wash the structure with lime three months ago, the work is under progress, a worker at site Venkatesh, (name changed) says, “The deep engravings and graffiti is taking a lot of efforts and time to be filled. The deep engravings and irregular contours of terrace are being filled with cement.”

Above the hall of justice lies a throne with ten stairs. Rulers might have reached the top to have a view of their empire or enjoy the evening breeze. The throne resembles peacock throne of Mughal Empire, with a minimalistic approach. The throne is also being plastered with white lime whereas the terrace floor is equated with cement.

Nakkar Khana or drum house looks more or less like a stage ornamented with stucco work which is symmetrically arched with niches and mirhab like structures. The central platform is wide and gives the appearance of grandstand adjacent to which are rather small looking similar platforms on the either side.

A wide open courtyard is presented after Nakkar Khana with two beige coloured monolithic structures on either side. The structures are arranged with columns which are heavily ventilated with archaic arched spaces. Similar stage appearance is inspired in modern DJ setup with sound system on the either side. #KhabarLive

How Nizam’s ‘Hyderabad’ State Became A Part Of The Union Of...

Why Princess Esra Made A ‘Royal Call’ To Get ‘Nizam Jewels’...