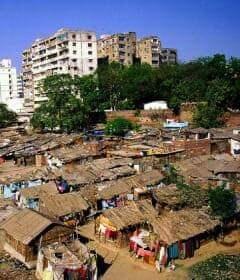 During the COVID-19 lockdown period many slums in Hyderabad are struggling with hunger and government welfare aid due to not having white ration cards to some residents and heavy corruption process in the public distribution system.

Chotta Ram says he does not have a ration card and so when the Telangana government promised 12 kg of rice and essentials to card holders through all-white fair price shops in the state to meet essential needs for the 21-day lockdown period, he panicked. “There are some 11 children in my family and we have food for just four more days,” says Ram who sells dolls for a living, “There are no people on the roads to buy the dolls and thus no money to buy anything,” he adds.

Ram and his family are from Rajasthan and they have been residing in Hyderabad doing daily wage labour; in the last couple of years, they have been earning a living by making and selling dolls. “Our ration cards are in Rajasthan. We never thought that disease could make things difficult so fast, we make dolls for a week and sell them over the next two weeks. If no one is buying our dolls because of this lockdown, how will we buy essentials to feed ourselves?” he asks.

It is not just people like Ram who have no ration cards who are suffering, but many card holders too are waiting for the state to kick off its scheme.

Chief Minister K Chandrashekar Rao on March 22 announced that one month’s ration and 12 kg of rice will be given to each of the 87.59 lakh white ration cardholders in the state. The state’s Civil Supplies Minister had said that fair price shops in districts would begin issuing these rations on March 26 and in Hyderabad on March 27. Two days later, the relief is yet to arrive from the state at many places, and at the slums in Hyderabad, families are beginning to tighten their belts.

The fair price shop next to the Miyapur slum told the residents that the shop would now open only by April 4. The Civil Supplies office didn’t respond to queries.

Many fair price shop dealers in the state say that though the state government made plans to distribute 12 kg rations, they backed off after witnessing the crowd at fair price shops on March 26. The fair price shop owners are also averse to the Telangana government’s decision to continue the use of Aadhaar-based biometric authentication for delivering the rations. The state had planned to provide the fair price shops with masks and sanitizers to clean the fingerprint scanner of the electronic- Point of System (e-PoS) machine each time a person uses it.

Fair price shops in the state function only for the first 15 days of the month. The state government had reduced the number of days to reduce pilferage and allowed ration cardholders from anywhere in the state to be used at any fair price shop. This administrative move has overwhelmed fair price shop owners in the time of the pandemic and eventual lockdown.

“People are in a state of panic, there was a massive crowd at the shops on March 26, it was unmanageable,” says P Veerasam, general secretary, Hyderabad Fair Price Shop Dealers Welfare Association. “No social distancing was being followed, no masks or sanitizers were provided to the fair price shops. The ePoS machines were also not being sanitised after each use. They had provided us with a bucket of water and soap for the customers. Is that even enough?” he asks

The Telangana government had decided to continue with Aadhaar-enabled biometric authentication for distribution of the rations even as Kerala and Delhi stopped or limited their use of Aadhaar-based biometrics that require multiple people to touch the same scanner.

What about those who have no ration cards and no money?

Neelima, who works as a nurse at the BRR Hospital in Balanagar says, “We are sharing what we have so people don’t go hungry. This is a slum where people often beg for money. Yesterday some stood on the Miyapur Highway begging for food and a few good souls fed them. There are about 10 families in the slum who have nothing to eat at their homes,” says the nurse who is also at the risk of losing her job at the hospital since the lockdown began. “The fair price shop often sells its goods to the nearby stores, are you sure we will get the 12 kg as promised? It will really help,” she asks.

Yuvaneshwari, a techie running a non-profit, Chotu ki education, for children at the Miyapur slum says: more than COVID-19, the risk of people starving is imminent now. “Clusters of people from the slums don’t have ration cards, surprisingly some have ration cards but it is not activated. They have ration cards registered at their native places; but when enrolled here, the card didn’t get activated. Some are not able to procure anything because of this,” she says.

The non-profit, in coordination with other non-profits and associations pooled in Rs 87,000 worth of essentials for the 200 plus families in the slum. But with the transport sector in paralysis over the lockdown, getting the essentials to the slum has proved difficult. “One vendor dropped out saying they won’t be able to service, it took us a few days but we finally managed to find a kirana store which has essentials. With the funds we got, we can get essentials for five days for 170 families in the basti,” she adds.

But Yuvaneshwari is aware that pooling in money through charities is not sustainable in the long term.

“Until the government comes to the grass-root level, these people will go hungry,” says Yuva. She also pins the present shortage faced by the slum-dwellers to panic buying by the upper class and middle-class households. “They have money to buy and are emptying the grocery shops. They don’t have the sense to buy items in small quantities. Thus, the grocery shops are out of stock and they can’t re-stock because of lack of transport options and the slum people again suffer,” she adds. #KhabarLive