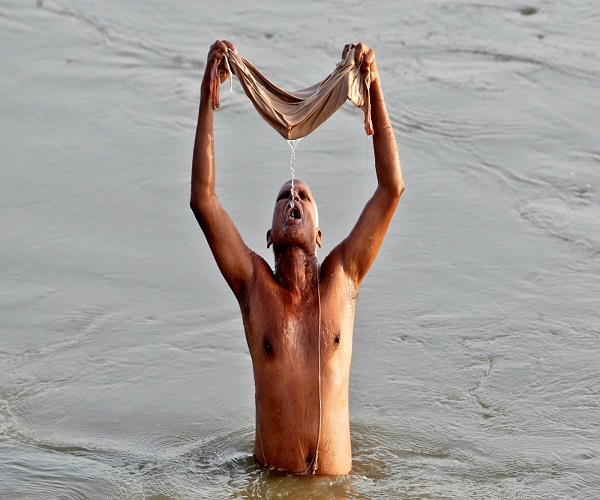 The ritual purity of Ganga water (gan˙ga¯ jala) has persisted as a matter of common faith across the Indian subcontinent, despite its visible contamination through industrial effluence and organic waste. How does a substance that is used every day retain its uncommon quality?

In many ways the social and ritual life of this water, to paraphrase Arjun Appadurai, straddles the space between commodity and sacra. The taken-for-granted authenticity of the river as a natural entity and preternatural wonder lends value to its water as a means of purification. The more remote the reach of the river where the water is collected, the more value might be placed on its ritually cleansing properties.

The arduous journeys undertaken by common folk, widows, the elderly, and end-of-life renouncers lend further sanctity to the snowy heights from which the Ganga originates and the landscape through which it flows. Most devout Hindus wish to see the source and confluences of the Ganga once in their lifetime. This desire is partly a historic recognition of the immense power, destructive and life-affirming, of the river and its various terrains.

I suggest that the salience and the symbolic density of Ganga water can be grasped only in the larger and capacious context of its mythological, geographical, and environmental associations. These aspects of the history and culture of the subcontinent not only are fused; they have developed as fundamental orientations at the everyday level.

Here ecology and related aspects of material culture cannot be separated from the sacred configuration of the pilgrim’s universe. As Richard White has eloquently stated in his study of the Columbia River, rivers are the most dynamic symbols of nature: “They absorb and emit energy, they rearrange the world.” By the same token they are also fundamental to the ideas of the cosmos and eschaton in the trans-Hindu belief systems of the Indian subcontinent.

These ancient ideas of a sacred river and its landscape may have had elements in common with today’s ecological and environmental concerns, a distillation of the reverence that has survived for powerful and life-affirming natural phenomena. How else can we explain the faith in the purity of the waters of Ganga, bereft of basic human curiosity about natural cause and effect?

Or the enduring faith in the cleansing, votive, and healing properties of such a substance in the face of ominous indicators of environmental degradation: the corrosive onslaught of dams such as the Tehri, the chemical plants, the suffocating silt deposits along the lower delta, and the prodigious quantities of organic waste?

Indian mythology is replete with stories about the miraculous healing properties of Ganga water, which gave cripples and lepers glimpses of hope, if not in this life, then certainly the next. A report for the Epidemiological Society of London noted that during the late nineteenth century, lepers were thrown into the river in the hope that their bodies, even in death, would be scrupulously cleaned of the contagion.

In one of the many legends surrounding the famous weaver, songwriter, and mystic Kabir recorded in the Sikh sacred text of the Adi Granth, Kabir’s son Kamal met a man with leprosy about to drown himself in the River Ganga. Kamal asked him to desist from this act. He then took some Ganga water into his palm, blew on it, and sprinkled it on the leper. Within an instant the disease disappeared. The cured man rewarded Kamal handsomely for this miracle. Kabir admonished his son for falling prey to the lure of wealth. Faith in such miraculous powers of Ganga water spread across many distant parts of India.

Mughal emperor Akbar drank only Ganga water; he did not like the taste of well water.
The reputation of the purity of Ganga water made it a much sought-after substance in all temple rituals of cleansing and oblation.

It is said that at the fabled temple of Somnath constructed by the Solanki Dynasty of Gujarat, the idol of Shiva in the form of the Lord of the Moon—if Al Biruni’s account in the Tarikh al-Hind is to be believed—was washed daily with urns of Ganga water brought in from hundreds of miles away.

The water of the Ganga was famous for its taste and lasting qualities. When Muhammad ibn-Tughluq decided to move his capital from Delhi to Deogir across the Vindhyas, Ganga water was procured for him every day; it took forty days to bring the water from the valley of the north. Mughal emperor Akbar drank only Ganga water; he did not like the taste of well water. Akbar extolled the purity and taste of Ganga water, calling it the source of life (a¯ b-i-ha¯ya¯ t).

At home and during his many travels and campaigns, Akbar had Ganga water delivered sealed in jars from Saran, the city on the Ganga nearest to Agra, his capital. Only the most trustworthy retainers were sent to procure Ganga water from the banks of the river.

In the late nineteenth century, British scientists and hydrologists became intrigued by the fact that Ganga water did not go bad, even after long periods of storage, contrary to the water of other rivers in which a mounting lack of oxygen quickly promoted the growth of anaerobic bacteria.

In 1896 the British physician E. Hanbury Hankin wrote in the French journal Annales de l’Institut Pasteur that cholera microbes that had a life of forty-eight hours in distilled water died within three hours in Ganga water. Dr. Hankin, a government analyst of the United Provinces of British India posted in Agra, had become interested in the Hindu custom of depositing their dead in the river.

Fearing reprisal from devout Hindus, the British government found it impracticable to interfere with such unsalutary practice, even during the frequent epidemics of cholera, plague, and other diseases. Hankin was able to secure corpses of cholera victims in the river and isolated samples of Ganga water with a large concentration of the bacillus E. coli. Much to his astonishment, he found that after six hours the microbes had completely disappeared.

Hankin concluded that the water of the Ganga and Yamuna Rivers in India was “energetically bactericidal” in general and particularly destructive of the cholera vibrio. Hankin attributed this to volatile acids present in the water, but the Frenchman Felix d’Herelle suggested that the disinfection was probably due to the presence of a bacteriophage.

Another British physician, CE Nelson, observed that Ganga water taken from the Hugli in Calcutta, one of its “filthiest” mouths, by ships traveling back to England remained fresh throughout the voyage. D’Herelle was amazed to find that only a few feet below the corpses of people who had died of dysentery and cholera that were floating in the Ganga, the waters were free of any form of contagion.

Water analysts, soil chemists, and environmental scientists are still debating whether Ganga water can destroy E. coli and other harmful bacteria. Many reasons are given for this potential. Some scientists have pointed out the effect of long exposure of the water surface to ultraviolet radiation. One plausible explanation, studied in great detail by the eminent Indian hydrologist Devendra Bhargava, is that the Ganga has chemical and biological properties that help the river rapidly absorb prodigious quantities of organic waste.

It seems to be able to reoxygenate itself almost miraculously. Author Julian Hollick, who has pursued this question with many Indian scientists, is convinced that the purifying qualities of the Ganga are due to the large concentration of the bacteriophage virus that is present in superabundance by the mud banks of the river and in shallow pools, and the virus is activated as soon as bacterial concentration reaches a certain threshold.

The bacteria-killing properties of the phage virus have been scientifically proven. However, exactly how the virus is related to the decontamination of Ganga water is a matter that has not been settled among researchers. There is still no clear explanation of the fact that festivals such as the Kumbh and Kartik Purnima, in which more than sixteen million people indulge in communal bathing on the Ganga, have seldom resulted in a pandemic or widespread outbreak. #KhabarLive