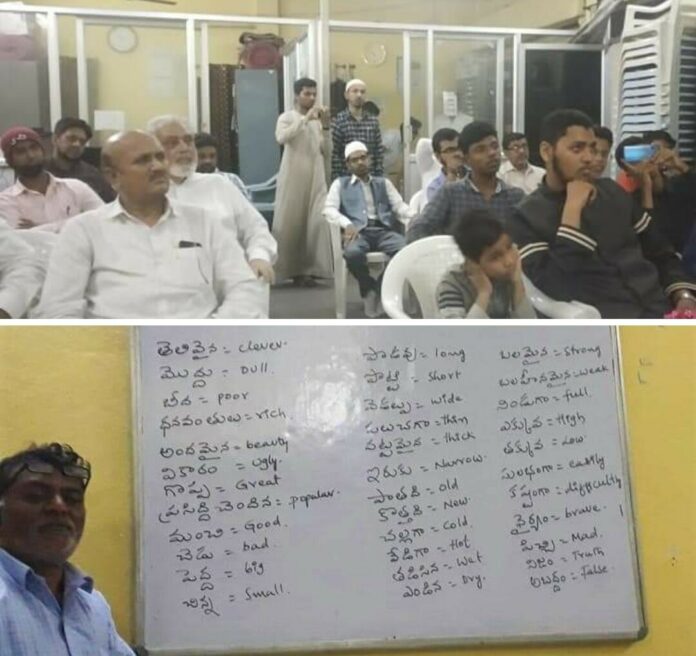 Aiming to popularise and change the perception of Telugu in Hyderabad’s old city, which predominantly has Urdu speakers, the Jamat-e-Islami has been holding spoken Telugu classes for those who want to learn the regional language.

Thanks to this initiative, several techies, students, youngsters and people from different age groups are now able to speak Telugu fluently. The classes are conducted in the Khilwat area in the heart of old city, by noted Telugu pandit MA Samad.

Speaking to #KhabarLive, Yusuf Ali Khan of Jamat-e-Islami’s Khilwat unit, who has been instrumental in conducting the classes, said that the idea came about as the youth of old city only spoke Urdu, and there was a need for them to learn Telugu, not only for communication, but also to attend job interviews and other career prospects.

After discussing the issue, the Jamat came up with a plan which has appeared to work.

Dr Faheem Uddin, Assistant Professor Translation Department, School of Languages, Linguistics and Indology at Maulana Azad National Urdu University, said that the common perception among the masses in this part of the city is that Telugu is an insignificant language in the area, and that this is why many are not inclined towards it.

ALSO READ:  Greedy Private Schools In Andhra Pradesh Makes Students To Public Shame, 'No Fee, No Exam' Drive Them To The Edge

Urdu was the official and common language used by the people of Hyderabad during the Nizam regime until the early 20th century. All official communication was in Urdu, and there was a great stress on the language. In fact, even when Osmania University was set up in 1918, Urdu was the medium of instruction.

“Apart from the common people, an elite group which included Hindus and Muslims, used Urdu as their conversation language. This negative attitude towards Telugu continued even after the merging of Hyderabad State with India. In contrast, the Urdu speaking people residing in the districts of Telangana easily adopted Telugu as a language,” Faheem added.

In the old city, however, there’s still resistance towards learning Telugu. According to Dr Faheem, in pockets of the old city, there are several Hindus too who don’t know Telugu as they only speak Urdu at home.

Though the residents may have spent decades in Hyderabad without knowing Telugu, the rapid growth and urbanisation of the city over the last two decades has made it necessary for the people to learn the language. Many people from the old city travel to other parts of Hyderabad either on business or to their workplace.

Poet and comedian Munawwar Ali, who has conducted several Urdu programmes over the decades, said, “The people of the old city are narrow-minded about learning Telugu and they’re distancing themselves from it because they have a contemptuous attitude towards the language.”

Munawwar said that in the Nizam era, the Hindus also learned Urdu and they were very fluent as Urdu was the official language of the State. “One should learn the language and no discrimination should be meted out to any language as it is a platform of communication,” he said.

Mohd Fareed Uddin, who works in a software company, is among those who’ve benefited from the Telugu classes. He said that previously, he was not able to understand any Telugu. However, the learning experience was good for him and his colleagues.

“Now, when we go to our workplace, or even places like a hospital, government office or a police station, we are less lost and feel more comfortable speaking Telugu,” he said. “As far as vocabulary is concerned, it needs time and practice. However overall, it was a good experience for me and my classmates as we can now understand Telugu and are trying our level best to speak it as well,” he added.

Fareed had earlier studied Telugu till Class 10 but had not taken an interest in the language after that.

“After several years, my interest towards Telugu has increased as it is the official language of the state and the people whom I meet on a frequent basis speak Telugu. So, I felt the need to learn the language and I have benefited greatly,” he said.

About 40 people in the age group of 25 to 40, which includes young graduates, freshers, students and IT techies, have benefited from these classes.

Buoyed with the overwhelming response, the Jamat-e-Islami is contemplating extending the classes to other parts of the old and new city.

As far as the syllabus is concerned, Samad has designed the curriculum according to age, abilities and skills. The classes for the first batch went on for about 45 days.

He observed that after successfully conducting the classes, the students began initiating conversations in Telugu. To improve their ability, they started a WhatsApp group and now share their day-to-day experience of learning the Telugu language through it. #KhabarLive 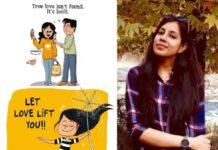 Who Are The ‘Real Beneficiaries’ Of Telangana Chief Minister’s Relief Fund?

#InsideKhabar: Behind The Story Of ‘Political Drama’ On ‘Raids And Searches’