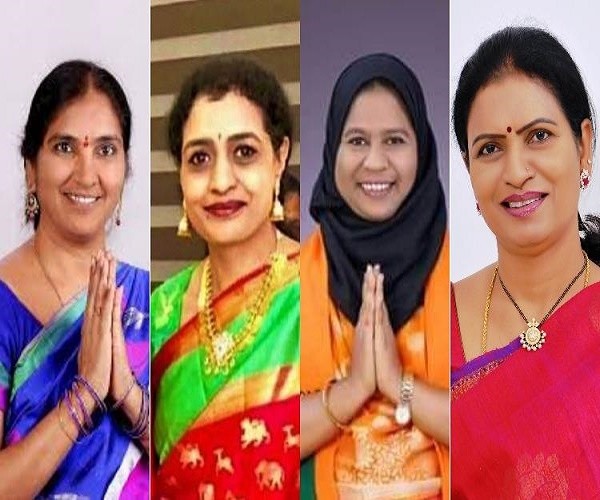 Even as the All India Congress Committee spokesperson Khushbu Sundar lambasted the Telangana Rashtra Samithi (TRS) last week for being anti-women, the Congress was scrambling to prepare for Sonia Gandhi’s first meeting in the state. Except, barring Sonia, the posters only had photos of male leaders.

This was questioned by Telangana Pradesh Congress Committee star campaigner Vijayashanti, who said, “The people are asking whether the programme is only for men.” Post this, the Congress redid the posters, but all that happened was that Vijayashanti’s face was included. This, perhaps, encapsulates best where women stand in Telangana politics. To put it simply, they don’t.

With polls barely a week away and party manifestos promising the world to women – including safety, education, employment – and parties shouting themselves hoarse about women’s empowerment, the reality in their own parties shows otherwise.

Across political parties, there is a meagre representation of women in terms of tickets allotted for the Assembly elections. Unlike local body elections, Assembly and Parliament don’t have a women’s quota, and not more than 51 women are contesting the upcoming Telangana elections from all the main parties put together.

For a state whose first Legislative Assembly didn’t see a single woman in its cabinet, it is now running for its next election after four-and-a-half years of a male-dominated government with no real change.

Medak MLA Padma Devender Reddy was the only one to hold a high-profile post in the last Assembly – that of Deputy Speaker. While the minuscule number of women who were given tickets reflects irony that political parties are impervious to, most of those women who were granted tickets come from politically prominent and upper caste backgrounds, which shows that nepotism is at play.

This, despite there being more women voters in some crucial constituencies in the state. According to the final electoral rolls released by the Election Commission, female voters outnumber male ones in many constituencies.

For example, in Sircilla, where 1,11,177 women account for 50.92% of the total voters compared to 1,07,146 men (49.07%), out of the total 2,18,323 voters. This is where incumbent IT Minister KT Rama Rao is contesting from. Even in Gajwel, from where caretaker Chief Minister and TRS chief K Chandrasekhar Rao is contesting, there are only 700 more men than women on voter rolls.

Here’s how each party has fared.

Mahakutami or Grand Alliance
The Congress, which often speaks about social justice and boasts about giving the country its first woman Prime Minister, has given only 11 tickets to women – and most of them were given to candidates from politically influential families. For example, Padmavathi Reddy, wife of Telangana Pradesh Congress Committee chief Uttam Kumar Reddy, former ministers Sabitha Indra Reddy, Sunitha Laxmareddy, J Geeta Reddy and few others obtained tickets besides DK Aruna from Gadwal, who hails from a family of Congress leaders.

BJP
The Bharatiya Janata Party (BJP) seems to have performed best as it has given tickets to 15 women, including Syed Shehzadi, a Muslim candidate, to take on AIMIM’s Akbaruddin Owaisi in Chandrayangutta. It also gave tickets to three women each from the SC and ST communities.

TRS
The incumbent TRS, headed by K Chandrasekhar Rao, seems to firmly believe that having a lesser number of women in the Assembly and the decision-making process will not be in an impediment in their goal of achieving ‘Bangaru Telangana’ as only four women have been given tickets.

Former Deputy Speaker Padma Devender Reddy has been given the Medak ticket, Gongidi Sunitha has been allotted Alair, Kova Lakshmi for Asifabad and Rekha Nayak in Khanapur. The final two are ST reserved constituencies. One of the criticisms that the KCR’s former government received is that it does not have female representation in decision making.

There were no women ministers on KCR’s cabinet despite four women being elected from the party. Dr A Suneetha, a political theorist and activist with Hyderabad-based Anveshi Research Centre for Women’s Studies told #KhabarLive said that poor representation of women in the upcoming polls reflects the state of society. “Ours is a society which does not yet completely tolerate/agree that women can also represent the people and be assertive.”

She said that even the few tickets allotted will go to candidates with political influence, and that “as long as there is no pressure from the bottom, there is no reason for the situation to change.”

Dr Siliveru Harinath, a research associate with the Centre for Economic and Social Studies (CESS) opined that ‘patriarchal institutions’ cannot digest a woman being the decision-maker.