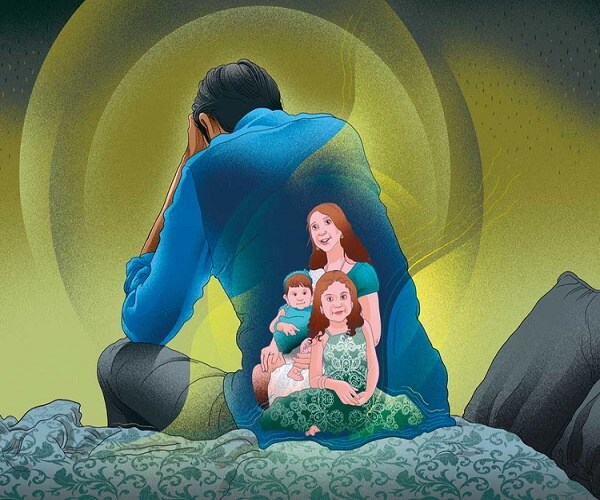 They are mainly found among low and middle income workers
You find them in all parts of the world, working and living far away from their homes and families. These men chose to work away from their families so that the latter can lead a decent life back home. ‘Married bachelors’ are in all strata of society, but mainly in the low and middle income brackets and rarely in the high-income groups.

Mustafa Kamal is one among them. Unlike what his name indicates, Mustafa Kamal is not a happy man anymore. This middle-income expatriate, who hails from the south Indian state of Telangana and works as a software developer for a private company in the gulf, has sent his wife and children back home recently. “Children are growing up, their needs are increasing, putting a strain on my finances. I had no other option but to resettle my family back home,” said Kamal, without elaborating much about the relocation.

Lack of jobs in their home countries and the desire to lead a better life drive most of the migrant workers to far off lands. But that wasn’t the reason why Sudheer Raju landed in the gulf countries. It was wanderlust that drove Raju, who is from the Hyderabad, to the shores of gulf. Before finding a job in Dubai as a civil engineer and marrying a Filippino girl, Raju worked in Thailand, Singapore and Malaysia.

Adventurer turned cautious migrant
“Those were the happy days. The adventurer in me is slowly becoming cautious and the desire to make more money and migrate to Australia forced me to send my wife and child to Philippines. I visit them as often as I can, but I am now living alone,” said Raju with a tinge of sadness.

“Honestly, I don’t like being called ‘married bachelor’. It was a choice I made, though with some difficulty. To achieve something, you have to give up something. Well, I do miss my wife and kid very much, but the thought that it is only temporary keeps me going,” explained Raju.

Forced to relocate family
Alone, all alone, emptiness and longing creep in with the passing of time for most of these ‘married bachelors ‘. Until recently, Kumar Rao was a happy man. The small-time businessman with a fledgling family lived a happy life in a two-bedroom apartment in Sharjah.

Times do change rapidly and with expanding family and rising cost of living, Rao, like many other expatriates in the gulf countries, was forced to relocate his family back to his home state Kerala, bringing in a touch of sadness to his daily life.

Silence and sadness
Silence descended on Rao’s once-buzzing house. Cacophony of children and their constant demands faded. Sound of happiness paved way to emptiness and loneliness. “I was terrified during the recent killer floods that hit Kerala. I waited three days anxiously for some information about my family,” said the businessman, narrating the harrowing time his family went through during the devastating floods in Kerala that killed nearly 500 people and cost the state more than $2 billion in damages. Rao is among the hundreds in the gulf countries who wept in silence during the floods in Kerala.

‘Married bachelors’ are not unique to the gulf countries, the term could be. However, at the end of the day, whether married or unmarried, what unites migrant workers moving out of developing countries is the desire ‘to make more money’.

“All my kids were born and raised here. When they started school in Dubai, it was awesome. But the fees and the demands of daily living became too much to bear. My wife was also working in Dubai then but had to stop when our third child came. Then, we were living on deficit, from payday to payday.”

The agony and downside
For all these guys, the decision to send his wife and kids home didn’t come easy. “We agonised over it for about two years. “Even now, every day is a sacrifice. You always feel some emptiness, the pain in separation. It’s a daily challenge.

“But my wife and I also fully realise one reality: Love demands sacrifice. This applies to both of us. To all of us. The only regret is that my kids really miss guld life.”

And then, there’s also a realisation, he said: “Loving doesn’t always mean physical presence. It could also mean going away, taking practical steps in order to take care of your loved ones and their future.”

Constant communication
“One upside today is the internet: constant and easy communication is affordable and available. I’m always in touch with my wife and kids, even if were more than 6,000km apart.

“My routine involves at least an hour of video calls daily…and chats, pictures, screenshots throughout the day, whenever possible. I message my wife about the time I leave home for work, and when I leave work for home.

“She updates me about our children, their homework, their foibles. She carries out my orders: If our kids overstep certain boundaries, my wife makes my presence felt. On weekends, I do video coaching to my kids. I give them exercises in math and writing, for example. I know, or at least try to know, all their jokes. That’s how we make up for lack of physical touch.”

One upside of being a ‘married bachelor’: “Whatever extra time I have in my hands, I devote to my own passions… music, writing, studying. I’ve taken online courses, which helped me in my personal growth. There’s always good side to this set-up. And I’m grateful for that.”

“Do I feel detached from my children and wife? Absolutely. Do I feel the pinch of separation. It’s there — everytime I go home to an empty room, preparing my food. Eating alone. I try to find like-minded men, also ‘married bachelors’, in my community. It helps. And I’ve learnt my life lessons well, so I try not to repeat the same mistakes.”

‘Lonely: A reminder of the tough decision that has been made’
Dr Mera Kumar Psychologist, says: “For many men, the fact that they have to send their family away due to financial reasons — even if it means for long-term gain — can be very undermining of their perceived role as a husband and father, and it can feel very disheartening in the long term.

Internet communication cannot replace actual presence
“While advances in technology mean that we can ‘feel’ closer to our loved ones in many ways, it still cannot compete with having the actual presence of loved ones around you day in and day out : the physical presence; the ‘life’ of a busy household around you; and being supported in emotional and functional matters.

Loneliness, sadness, depression, anxiety and adjustment issues
“But if the separation is for a longer term, or if visits are less frequent, or if there appears to be no end in sight, then this is where struggles and sadness can arise.

“Struggles can include resentment towards the workplace, loneliness, sadness, depression, anxiety and adjustment issues around the new situation: how to cope with coming home to an empty house, and all that entails.

Emotional needs may go unmet
“There is also likely ongoing and significant pressure to perform at work, and to keep their job. Men are missing out on milestones of their developing children and developing solid relationships. They are getting less chance to show non-financial ways of providing and supporting; physical needs go unmet; social circumstances may change now that they are ‘on their own’ as such; emotional needs may go unmet as they try to put on a brave face; good physical and moral habits can slip through less accountability; and weekends can become very lonely and a reminder of the tough decision that has been made.” #KhabarLive