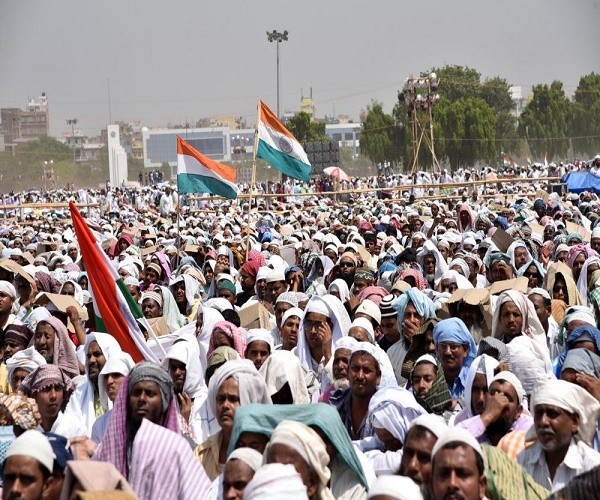 “We will move heaven and earth. We will make an Act, start implementation and go there (Delhi). If they don’t do it, we will fight out with Centre. We will not go back.” This is what Telangana Chief Minister K Chandrasekhar Rao said as he stood up in the state’s Legislative Assembly in March last year after he proposed to increase the quota for socially and economically backward Muslims in the state from 4% to 12%.

The statement had set off several debates on the constitutional challenges that KCR could face as it would need to amend Schedule 9 of the Constitution, as the proposed legislation would take the overall reservation in Telangana to 62%. However, the underlying political move was clear- the Muslim community was an important voter base in the state and could not be ignored.

The demographic
As Telangana heads to the polls, Muslims who comprise 12.7% of the total population in the state and come under the Backward Classes (E) category are a key demographic that play a crucial role in the outcome of some major constituencies in the state.

It is also the presence of the Muslim community in the state that allows parties like the All India Majlis-e-Ittehadul Muslimeen (AIMIM) led by Asaduddin Owaisi to thrive in the state.

While most of the Muslim population is largely concentrated in Hyderabad, there are pockets in the state in areas like Nizamabad, Mahabubnagar and Karimnagar, where they hold a significant amount of influence.

According to the Telangana Social Development Report, there were 44,64,669 Muslims in the state in 2011, of which 17.13 lakh were in Hyderabad district, constituting 43.5% of the total Muslim population in Telangana.

History of influence
Out of the 119 constituencies in Telangana, observers note that there are 29 where Muslim influence is high and where they play a critical role in the result. By this, it means that their population is 15% or more in the region. In another 30 constituencies where there is a marginal presence, they play the role of a deciding factor.

“There was a time when outside Hyderabad or in constituencies where AIMIM was not contesting, Congress used to be the single biggest beneficiary as it would get the minority votes. This changed with the formation of the Telugu Desam Party (TDP) in the 1980s as NT Rama Rao was able to make a dent in the vote bank, first in Seemandhra and subsequently in Telangana. With this, Congress’ monopoly over Muslim voters ended,” says a senior politician from Hyderabad, who wished to remain anonymous.

Observers point out that even when the TDP was later routed under the leadership of Chandrababu Naidu for its alliance with the BJP, it was the Muslim voters who contributed to the revival of Congress in the state as well.

Former CM YS Rajasekhara Reddy’s attitude towards minorities seemingly ensured that the Congress enjoyed goodwill. However, things were not the same in 2014, as it was evident that anti-incumbency was strong against a decade-long government and the community was turning towards the TRS.

While the Congress has pointed out that it was them that introduced the existing 4% reservation for the Muslim community in the state, the AIMIM maintains that it was only done on their insistence. However, the Owaisi-led party also says that it is not only the issue of minority rights which helps them bag votes.

“We are confident because the Majlis has always focused on civic issues and developmental activities, which also reflects in our strong presence in municipal bodies across Telangana. We have cadres and presence across the state,” AIMIM MLC and senior leader Syed Hasan Jafri told #KhabarLive.

“The Congress has lost all its traditional vote banks and is indulging in tokenism. They are taking their votes for granted and it will backfire on them. They must work on regaining support,” he adds.

The TRS-AIMIM bonhomie
The TRS has always made its stance clear. Shortly after the 2014 Telangana Lok Sabha elections were held, KCR’s daughter and Nizamabad MP K Kavitha said on a live debate on a national channel, “As a policy decision, we don’t want to go with the NDA because of the huge Muslim wave that we have in Telangana. They have been a part of the movement and supported us and they have showered their love upon us.”

Even on September 6, when KCR dissolved the Telangana Assembly months ahead of its full term, saying, “The principles of TRS are opposed to the politics of BJP,” adding “The relation between TRS and AIMIM has been cordial and even a contest between the both will be fought on friendly terms.”

A day later, the AlMIM has also made its stance clear, with Owaisi saying, “I’m convinced that K Chandrasekhar Rao will be the next Chief Minister.”

With the AIMIM having his back, KCR has also been relentless in his pursuit on bagging the 12% reservation that he has promised to the community, even lashing out at Prime Minister Narendra Modi while campaigning for the polls.

“The Narendra Modi government is an utter flop. We asked for reservations for Muslims and STs. The Muslim population has grown after the bifurcation of Telangana. It is our need. We rightfully demanded for it and he rejected it. 30 letters I have written to Modi but he has a Hindu-Muslim disease,” KCR told a massive gathering earlier this week.

Despite this, critics claim that the TRS and BJP have already struck a deal for the upcoming Lok Sabha elections.

A tough chance for the Congress?
Just last week, the Congress received a jolt, when two of their senior leaders; former state Minorities Commission Chairman and TPCC Vice President Abid Rasool Khan, and Mohammed Khaleequr Rahman, who was serving as a national coordinator in the AICC’s minority department, quit the party and jumped ship to the TRS.

In his resignation letter to Congress President Rahul Gandhi, Rasool said that he was upset over the lack of candidates from the Muslim community and added that the party was “controlled by Sanghis wearing Khaki within the Party”.

While this has demoralised the Congress ranks, some say that the party can still bank on the anti-BJP vote over the TRS.

“As it fights the BJP at the Centre and the TRS in the state, the Congress hopes that this will be an opportune moment for them to rally the Muslim vote. Obviously, the TRS has an initial advantage because of AIMIM support, but I don’t think the ruling party will be able to monopolise the votes of the Muslim community,” says K Nageshwar, a senior journalist and political analyst.

Nageshwar also points out that dissolving the Assembly may have helped the TRS’ chances as the anti-BJP votes would have gone to the Congress if the state polls were held along with the Lok Sabha election.