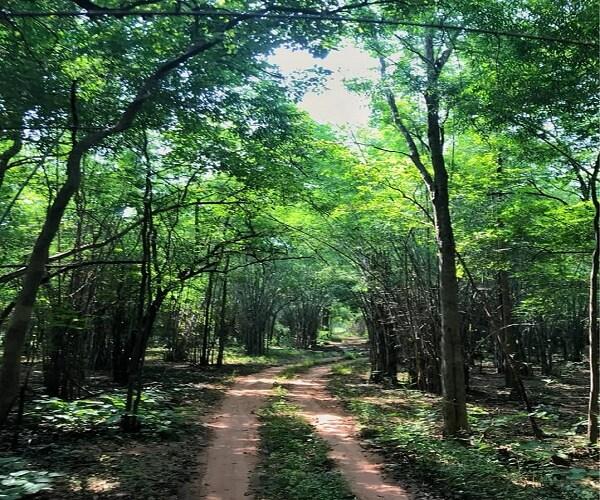 It was just around this time last year when three individuals had entered the Nallamala Forest during the Bourapur jatara. ‘Srisaila Swamy’, as he introduced himself to the Chenchus, had claimed that he was born to the head priest of Srisailam who had passed away a few years ago, passing on his government job to this ‘Fake Swamy’, who was more interested in treasure hunting than propagating spirituality.

He, along with two others, had visited all the ancient temples and monuments. During his night’s stay at Appapur Chenchu Penta, under the influence of alcohol, he had revealed that the trust which he owned has been collecting stone inscriptions (Shaasanalu), to prove that many temples in AP and Telangana used to be owned by his trust. Jagadeesh, a Chenchu, enraged by the Purohit’s claims, had gone naked, challenging this Swamy for a fight. Other Chenchus convinced Jagadeesh, a national archery champion, to cool down.

Events of that night, which may sound like a few persons having a discussion all night and engaging in a fight, is, in fact, a glaring reality of how treasure-hunting has become an unavoidable menace inside the core area of Amrabad Tiger Reserve, mainly due to the tribal festivities (jataras) being held inside the forest every year, whether it may be at Bourapur or Saileshwaram.

History takes us back to the 1940s, when Khaja Mohammed, the then Director of Archaeological Survey of India, had spent years surveying the temples and ancient monuments inside the Nallamala. Ancient and Historical Monuments and Archaeological Sites and Remains (Declaration of National Importance) Act was enacted in 1951. Around 3,686 sites were declared as protected monuments across India back then.

For whatever reason, many heritage sites inside the Nallamala couldn’t find a place among those sites. Time passed and these sites, which had witnessed the most primitive of early human settlements, were plundered by treasure hunters – Bourapur temple being the most recent one to be desecrated by them during their hunt for treasure.

Datta Paadalu in Kadilivanam, Akka Mahadevi caves and Chandragupta Pattanam near Vatvarlapally, Mallela Teertham, Nizam’s guest house near Farhabad, Loddeswaram (5 km away from Farhabad), Paapamma gudi, Bugga Mallaiah temple, Saileshwaram (near Rampur Penta), Onti Veeranna temple in Bourapur and many other temples which Telangana Today doesn’t want to disclose about; have been desecrated by treasure-hunters for decades. Whether or not treasure was found, only the treasure hunters can answer.

It was in the 1950s and 1960s when the then Congress government had given a free hand to timber depots to use Nallamala’s forest wealth; businessmen had come along with labourers from plain areas to cut down trees inside the forest. It was during that time when treasure hunting had gone on in full swing and many heritage sites were dug.

It was in the 1880s when English newspapers had reported gross irregularities and corruption perpetrated by Sardar Abdul Huk (Sirdar Diler-Ul-Mulk Bahadur), the then Home Secretary of Hyderabad under Salar Jung, the then Prime Minister of Hyderabad State. Huk was suspended by the former for having suspicious connections and granting concessions to mining companies to the tune of 8,50,000 pounds.

The kind of plunder of the State’s wealth was well-recorded in London-based newspapers. Concessions were given to coal, diamond and gold fields across the forests of the Hyderabad State. This was called the ‘Hyderabad (Deccan) Mining Company scandal’, official documents of which Telangana Today has accessed. One can now guess where all those diamonds in Salar Jung Museum came from.

While that was history, politicians, priests, businessmen and even the educated class from the Chenchu community have been actively hunting for treasure inside the forests at various heritage locations for the past few decades, remnants of which could be found at the Akka Mahadevi caves and many other temples.

Eco-tourism initiative has only added to the problem, as tourists could be seen entering the Nallamala with drones in the recent past. Nallamala has now become a sought-after destination for filmmakers and the so-called activists, who claim to have led the ‘Save Nallamala’ campaign against uranium exploration recently.

Jataras at Bourapur and Saileshwaram temples held annually, which were originally intended to be a stage for Chenchus to discuss their problems with the administration, have only acted as a cover for prospective treasure hunters who have been conducting recce during these fests.

The Act specifies various measures which the State government could take to protect heritage sites (including ancient monuments, temples, Islamic monuments, sculptures, stone scriptures and pre-historic sites like megalithic burials and so on). There is also provision for establishing a heritage fund in the Act, which also prescribes a sentence of up to three years in prison and fine of Rs 50,000 on persons who perform excavations at these protected sites.

However, two years later, District Heritage Committees headed by the District Collector, comprising District SP, AD Heritage, ZP and Municipal Chairpersons and other members, has not been formed in any district. Even now, the Additional Director of Heritage handles the five districts of erstwhile Mahabubnagar district and the post of Director of Heritage has been vacant since December 2019.

Once the Telangana Heritage Department officials perform studies about a heritage site and suggest to the higher authority for the site to be declared as a heritage protected monument, the heritage committee needs to hold a meeting and pass a resolution which would go all the way up to the cabinet, which needs to issue a gazette notification approving the proposal. Funds would be mobilised and the structure or site would be protected. However, the reality is a lot different within the department.

“When I had joined service in 1975, we had the most committed and dedicated seniors who had guided us and trained us. Today, we neither have that kind of commitment in the staff, nor do we have the required staff to protect these declared heritage sites, 50 per cent of which have already been encroached upon. Funding is also a big problem,” said Dr Bhanu Murthy, senior-most archaeologist, who has performed over 100 excavations during his career.

Unless the temples and other heritage sites in the Nallamala forest are declared as heritage protected monuments, crooks like Thirumalesh Naidu, Yellappa, Srinu, Balaswamy and Shahbaaz Ali, who have desecrated the ancient Bouramma temple in Bourapur village of Lingala mandal in Nagarkurnool district, would otherwise go scot-free. #KhabarLive

Why They Still Languish In ‘Gulf Jails’ Even After ‘Completing Their...