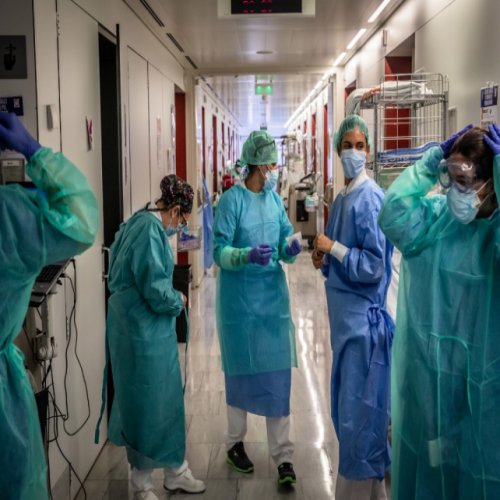 In Telangana government-run Gandhi Hospital, nurses who were asked to quarantine themselves for two weeks after treating Covid-19 patients have been provided accommodation in the same building that houses both infected patients as well as those displaying symptoms.

Noting that the pandemic is seeing a “persisting and ever escalating spread” the United Nurses Association pointed out that nurses and health workers are exposed to infection.

According to nurses who spoke to #KhabarLive, there are 16 confirmed patients on the first floor of a building in the hospital and more suspected patients on the second. The nurses were offered accommodation on the third floor of the same building.

Overall, there are 53 positive cases in the hospital and nearly 150 patients whose test results are awaited. To deal with the influx of patients, the hospital has divided its nurses into batches—after working for two weeks non-stop in coronavirus wards, each batch of nurses has been asked to quarantine themselves for 14 days.

But instead of offering single rooms with attached bathrooms to the nurses, who have all been in close contact with Covid-19 patients, the hospital has asked two nurses to share a room.

“But that is not what quarantining should be. A healthy nurse will catch the infection from another if they are living in the same room and using the same washrooms and other things. We have to be given single rooms,” said Sharmila Joseph, secretary of the Telangana State Hospital Nurses Union.

India’s overstretched healthcare system is in danger of being overrun by the Covid-19 pandemic as the number of cases increase in the country. Scientists have said that the virus follows an exponential growth pattern, which means that with every passing day, it infects more and more people rapidly.

While around 50 nurses from the batch should have stayed in quarantine—to avoid the risk of them passing on the virus to their families and people they meet while travelling—Sharmila said that many of them left for their personal accommodations in the city because of the lack of facilities. Currently, only three male nurses and three female nurses have stayed behind to quarantine themselves in the hospital.

The nurses who left, said Sharmila, “were scared that if they keep living in the hospital, there are higher chances of them getting exposed to the virus. This is how infection spreads, I am worried about the ones who left as well.”

According to guidelines issued by the central government, OPD services at Gandhi Hospital have been shut, and it is being turned exclusively into a COVID facility.

Last week, the Telangana government’s health department had announced that doctors on Covid-19 duty in two hospitals including Gandhi would be housed in the a Hotel in Hyderabad. The order did not mention any such facilities for nurses and the other staff at the hospital.

#KhabarLive has reached out to representatives of the Telangana government and the hospital, and will update this copy once they respond.

Sharmila said that though she is not upset about not getting five-star facilities like doctors, she is increasingly worried about the quarantining facilities being offered to nurses.

When #KhabarLive spoke to Sharmila a week ago, she was hopeful that the government would soon make proper arrangements for their accommodation as well. However, speaking now, she was disappointed that despite a sharp surge in the number of patients in the hospital, nurses are left grappling with unsafe living situations.

The facilities offered to the batch of nurses currently on duty are also not satisfactory. They have been provided accommodation in the vacant hall of the hospital premises.

“Nine nurses are living in one hall, with two toilets and one bathroom. Today, they said they were not even getting water supply there properly as well,” Sharmila told #KhabarLive.

When the quarantined nurses complained to the management, they were offered the same hall—where many people stay together and use a few bathrooms—for the future.

“We work round the clock wearing one PPE, being around patients 24 hours. Our chances of getting exposed are way more than that of doctors’. We do the first round of checking and only then doctors come. We should be getting better quarantining facilities,” Sharmila said.

“We are ready to treat patients all day, but please keep us safe too. We have families too and they worry,” she added. #KhabarLive

Chitrakoot’s Saipur Mela Is A Symbol Of Communal Harmony In Troubled...