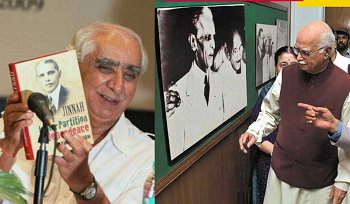 Isn’t it the right time that Hon’ble Prime Minister of India, Narendra Modi, speaks out his mind on the Jinnah photograph controversy, presently rocking not just the Aligarh Muslim University campus but also the wide world outside the campus?

It is quite clear that if the Prime Minister of India clearly and unequivocally expresses his views, or better still, issues a directive, then the AMU will have no choice but to follow his directive. The issue would be resolved in one stroke.

After all, isn’t the peace of the land and India’s world image more important, then a dusty 80 year old photograph of a man who was described more than a century ago by the noted freedom fighter, Sarojini Naidu, as the “champion of Hindu-Muslim unity”, and later became infamous as “the man who divided India”.

But it is clear that before the Prime Minister goes public on the Jinnah photograph controversy, he will have to redefine his government’s policy on the future of different photographs of Jinnah donning different properties in the country, especially the Bombay High Court. He would also have to decide whether to ban or not to ban the autobiography of Jinnah penned by one of the senior most leaders of his own party, the redoubtable Jaswant Singh. He would also have to decide the fate of his party’s patriarch, former Deputy Prime Minister, L. K. Advani, who, just a few years back, paid homage at the grave of Jinnah in Karachi.

Having made the above point, it is also clear that the saffron brigade has won the first round by deftly succeeding in polarizing public opinion in the Hindi heartland on communal lines on this issue. They succeeded in one major objective that they prevented the former Vice President Hamid Ansari not only from receiving the life membership of the AMU Students’ Union but also from delivering what was expected to be a landmark lecture at AMU.

They have also received fresh ammunition for painting the entire Muslim community at “Ghaddars” (traitors) who are in fact supporters of India’s arch enemy, Pakistan.

This writer was in fact sitting with the former Vice President at the Aligarh Muslim University guest house on that fateful afternoon on May 2, when gunshot like sounds reverberated through the room. This was followed by the feint fumes of teargas which started floating in through the half open windows . Within a few seconds, it was clear that the violence and the police action was taking place barely a hundred meters from where we were seated.

With a typical twist of his head and a contemptuous smile on his face, Mr. Ansari just made a single remark: “History? What do these people know about our history?”

Shortly later, under advice of the District Magistrate, Mr. Ansari reluctantly agreed to their suggestion to move out of the guest house and leave for New Delhi.

The leaders of the AMU Students’ Union, who are presently on an indefinite dharna, are obviously plagued by a deep inner conflict. If they call off their protest and consider the advice of some well wishers and agree at some later stage to remove Jinnah’s portrait from the Students’ Union hall, it would be like an abject surrender to the goons who were not only publicly abusing them in their own house but also flinging invectives like “traitors go back to Pakistan”. They fear that even if they remove the photograph out of moral compunction, the saffron brigade would shout from the roof tops that they have brought down AMU to its knees.

On the other hand, if this issue is not resolved in an amicable manner, then the BJP will pull back no punches in launching an anti Muslim hate campaign, especially in Western Uttar Pradesh where a by-election is due. Uttar Pradesh Chief Minister Yogi Adityanath’s statement yesterday clearly outlines his party’s strategy on this highly inflammatory issue. Reports trickling in from neighbouring districts of Aligarh indicate that the hate campaign has already been launched.

What is equally disturbing is the fact that the entire narrative of students’ protest at AMU have deftly been turned around by the spin masters of the saffron brigade. The protest at the AMU campus, which entirely revolves around the demand for punishing the saffron goons who, transgressed the AMU campus and the police force which failed to control them and later unleashed its fury on the protesting AMU students, is now being presented before the country as if the AMU students are protesting against any possible attempt to remove Jinnah’s photograph.

The only way out now is for the AMU students’ leaders to lob the ball in the Prime Minister’s court and then abide his honorable views on the subject. Till then, not only the citizens of this country but all over the globe will be waiting with a bated breath on his decision regarding a very critical phase in India’s freedom movement. His answer will be watched closely all over the Muslim world, especially by the governments of Saudi Arabia and the UAE, both of whom are one of the staunchest allies of PM Modi in the geo-politics of today’s world. Till then, the AMU community remains trapped in the horns of a grim dilemma. #KhabarLive

Now, The Dalit Is The New Muslim In India