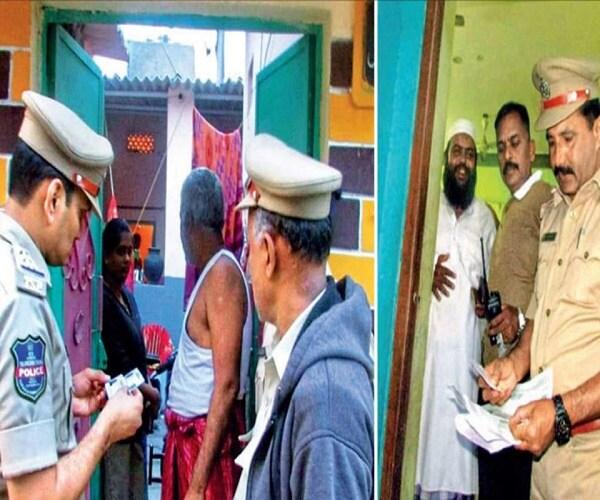 The police have cordoned off certain Muslim areas close to Charminar in Hyderabad and have begun the operations to go to every house and demand to see documents including Aadhaar cards and vehicle registration documents.

They were asking details about children, their schools and whether they owned the houses they were staying in or they had rented.

At LB Nagar, on January 9, the police cordoned off the area to conduct searches and they seized eatables such as chilli, turmeric and several spices. Those selling these items were also taken into custody.

According to Hyderabad City Police 2019 annual report states that such cordon and search operations have been listed as one of the reasons for the “decrease in crime rate”.

Of the 192 cordon and search operations conducted within the Hyderabad Police Commissionerate limits, the annual report states that six cases were filed, and 2,464 ‘unauthorised’ vehicles were seized. However, it was not known whether these were stolen vehicles or simply those that did not have proper papers.

This time as soon as it happened in Shakkar Gunj, Mumtaz Ahmed Khan, the member of Legislative Assembly (MLA) from Charminar constituency and a member of the All India Majlis-e-Ittehadul Muslimeen (AIMIM), rushed to the locality.

He expressed solidarity with the residents and condemned the police for its actions. There was an altercation between the MLA and the police and after that the team of over-70 members of Hyderabad Police withdrew from the area.

Several citizens, especially the women, are worried as most of the time the police come during hours when the men are out for work. The report states that there were women police officers, but it was an intimidating affair.

However, AIMIM President and Lok Sabha MP from Hyderabad Asaduddin Owaisi and his firebrand MLA brother Akbaruddin have not uttered a word against these operations.

Calls and messages to Owaisi went unanswered. In rallies against Citizenship Amendment Act (CAA) and National Register of Citizens, the senior Owaisi simply stated that even if the police asked for Aadhaar Cards, no one should show them. He did not address why Muslim areas were being cordoned off and searched.

Condemning the searches in Muslim localities by Telangana police, Telangana MP K Venkat Reddy questioned why Owaisi was not speaking up.

“AIMIM is a part of the government. Asaduddin Owaisi is friends with the state CM K Chandrasekhar Reddy. This question should be answered by Owaisi. Recently, Owaisi went with a huge delegation of top Muslim leaders to KCR and the CM had said that they would hold a rally against Citizenship Amendment Act, but there has been silence on it since then,” points out Reddy.

The Nalgonda MP questioned why Owaisi hadn’t asked his alliance partner KCR about these illegal searches.

This is not new. This has been happening since 2015 under the Telangana Rashtra Samithi-led government in the state. This kind of data collection drives are illegal and it leads to surveillance, say activists.

The police officials have stated that these searches are fully legal. The Cyberabad police, which initiated the action, had prepared standard operation procedures for the cordon and search. The police in 2015 had stated that will continue to cordon and search operations in the city. The KCR government has also extended full support to this. According to the police, the operations in Hyderabad were on the lines of anti-Naxal operations. #KhabarLive

Why Muslims And BC Votes Can Tip Scales In Seven LS...