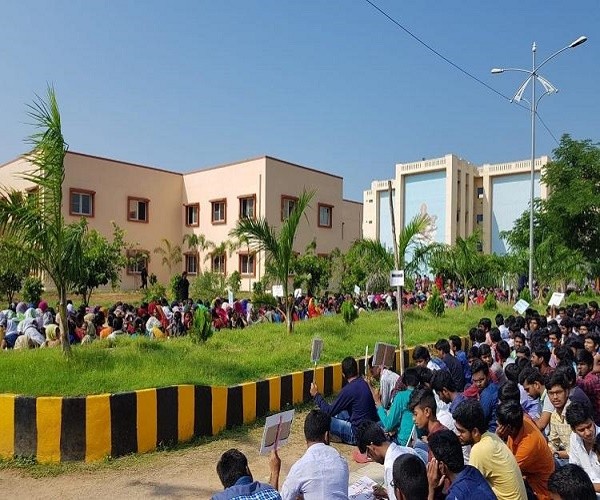 Students at the Rajiv Gandhi University of Knowledge Technologies, Basar called off their two-day protest, following assurance from the Vice-Chancellor that all their demands would be fulfilled.

The university interim VC Dr Ashok and Nirmal Joint Collector A Bhaskar Rao held talks with the students, after they refused to attend classes and intensified their agitation. After deliberation with the students, the VC announced an indefinite holiday for the university, so that all the necessary arrangements could be made as mentioned in the student’s demands.

Accusing the administration of mistreating them and ignoring their concerns, nearly 6,000 students had boycotted their classes and begun their protest at the administration building on Monday. They also started a social campaign, appealing to Minister of Urban Development and Municipal Administration KT Rama Rao to intervene and resolve their issues.

The protest started after a second-year student committed suicide on the campus on September 22. The students accused the administration of neglecting them and pointed out several issues which are affecting them.

The students alleged that there was no transparency in recruiting staff and also claimed that the food provided in the hostel mess was substandard, owing to which several of them had suffered food poisoning in the past.

The students had 18 demands which included: Form a students’ governing council; appoint a permanent Vice Chancellor, Director and faculty; change examination pattern; introduce research in studies; keep library open without any time restrictions; drop the outpass system for students; allow laptops inside dormitory and home; limit the policing by security; transparency in administration; and expansion of the hospital facility to accommodate more number of students.

“The VC agreed to all our demands, which we had given in writing. The VC earlier agreed to the demands orally, but we protested and got his assurances in writing,” said a student.

He further said that the administration would let them know when the college would resume. “We were told to leave the campus so all the changes can be made. We hope that the campus would be more student-friendly when it reopens,” he said. #KhabarLive

How The EC’s ‘Mystery Technology’ Destroyed The ‘Mass Voter’ Future In...