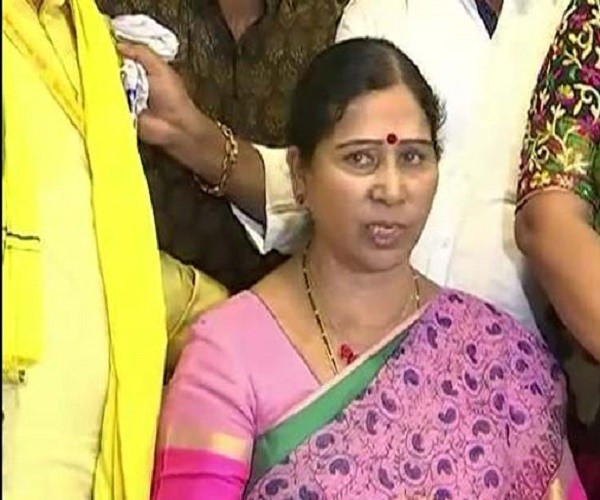 In a surprising moment, the speaker of the meeting Galla Aruna Kumari suddenly broke down for her insults and brickbats in the party leadership. She found herself in oblivion and she looks too depressed over some matter append between her and CM Chandrababu Naidu, recently.

She was one of the most popular leaders in YS Rajasekhar Reddy Cabinet and she used to command a lot of respect from leaders irrespective of the parties. A decision which she took keeping the political aspirations of his son Galla Jaydev in mind after the bifurcation led to her downfall. She hadn’t only faced defeat contesting on the TDP Ticket but also couldn’t get the prominence she deserves as a Senior Politician.

At the recent meeting with party activists in Tirupati Rural, Galla Aruna admitted facing many insults post the 2014 General Elections and the situation hasn’t changed even after complaining to CM Chandrababu Naidu. She regrets not being able to do justice to the party activists due to the local leaders. The Former Minister cried foul saying those who were accompanying her in the car all the time had conspired against her.

There will be an agenda behind each and every move of a Politician. What Galla Aruna wishes to convey with her outburst? Was she demanding good prominence in TDP or Hinting about her defection to any other party? Let’s Wait and See!#KhabarLive

ALSO READ:  Andhra Pradesh 'IPL Playoff Matches' On May 8 And 9 In Vizag