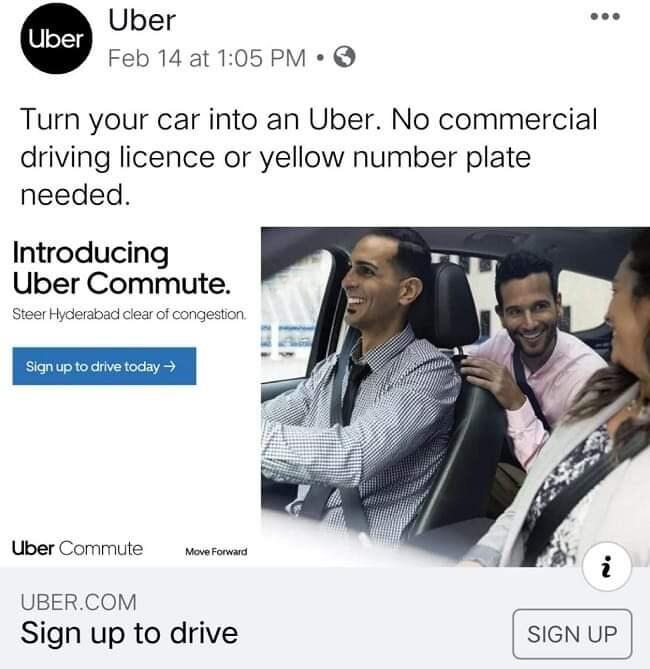 The big question is the taxi aggregators in Hyderabad are flouting the norms and allowing white number plate vehicles for cab service and nobody objecting on their dareness. As, Uber had first rolled out Uber Commute in Bengaluru 2016 but the service as banned in the state for violating transport department rules, mostly the Motor Vehicles Act 2019.

Cab drivers in Hyderabad are up in arms as there is concern that Uber may launch a service titled Uber Commute sometime this year. Under Uber Commute, the vehicles registered with white number plates will be able to commercially ply passengers in Hyderabad. Though it is learnt that Uber had launched a pilot project last year and abandoned it, fresh concerns rose after the cab aggregator posed an advertisement in February, 2020 announcing the service. Apart from Uber, other taxi aggregators such as Ola, Rapiro routinely employ drivers with white number plates in the city, say the unions.

Alleging that the service has been operating for close to a year, representatives of various driver unions met with Telangana ministers who assured to look into the matter.

Uber had first rolled out this service in Bengaluru 2016 but the then Karnataka transport and road safety commissioner deemed this service as violating transport department rules, mostly the Motor Vehicles Act 2019.

The Telangana State Taxi and Drivers Joint Action Committee consists of eight Ola and Uber unions. They represent over 35000 drivers across the state on February 21 sent a letter addressed to the Telangana Transport Minister, Puvvada Ajay Kumar, pointing out that only taxis registered with yellow number plates can ply commercially under the MVA.

“We pay road taxes, quarterly, half-yearly and annually. We also pay heavy insurance starting from Rs 35,000 every year, there is also a fitness test that has to be done every two years. White number plate vehicles don’t have to comply with these rules. They pay a lifetime tax and no other tax, nobody is going to question them for the next 15 years,” says Shaik Salauddin, who adds that drivers are already not able to pay their monthly EMIs for their vehicles, “We are open to the idea of government improving public transport through buses and metro. If you’re going to give revenue to private taxi aggregators isn’t the government losing money through taxes? Tomorrow will government be okay if we also remove our yellow number plates and start plying with white number plates?” he asks.

The JAC alleges that service like Uber Commute is also a gross violation of Rent a Cab Scheme 1989 of Andhra Pradesh (http://transport.bih.nic.in/Docs/rent-a-cab.pdf) where no person shall engage himself in a business of renting a motor cab under the scheme without a licence. The scheme is for motor car owners who want to rent their cars for other private uses.

The JAC leaders met with state Labour Minister Ch Malla Reddy who in turn directed the JAC to take up the issue with the transport department. The minister also assured that issue would be taken up in his official capacity.

Uber has taken down the blog asking drivers to sign up for Uber commute in Hyderabad, an archived version of the website though is available here (https://web.archive.org/web/20190726015208/https://www.uber.com/en-IN/blog/steer-hyderabad-clear-of-congestion-with-uber-commute/).

Abandoned ‘Railway Quarters’ Becoming A Den For Anti-Socials In Secunderabad