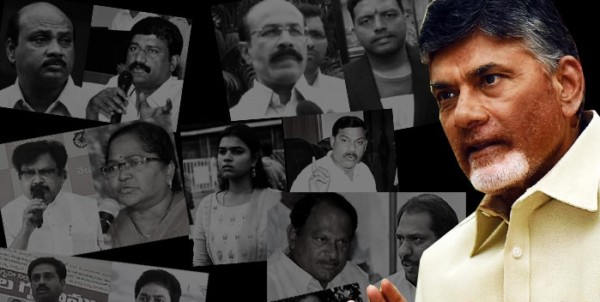 The internal conflict within the leaders of TDP is posing a major challenge to seasoned politician Chandrababu. While Chandrababu is waging a war with the Centre and also running the state government, he is also facing issues with the party leaders that is worrying many of the TDP party activists, supporters.

Bhuma Vs AV Subba Reddy (Kurnool District)
The ongoing episode of minister Bhuma Akhila Priya versus senior leader AV Subba Reddy in Allagadda of Kurnool district is one major issue that is irking Chandrababu. Although Naidu intervened into the issue, the peace between Akhila Priya and AV Subba Reddy seems too far since tempers raised among two groups.

Ganta Vs Ayyanna Patrudu (Visakhapatnam District)
The feud between ministers Ganta Srinivasa Rao and Ch Ayyanna Patrudu from Visakhapatnam district is yet another embarrassing situation for the TDP supremo. Although both are from various constituencies, their strained relationship may have a telling effect on district’s politics in 2019 polls.

SV Mohan Reddy Vs TG Bharath (Kurnool District)
Yet another instance is again from Kurnool district. There is a huge contest between sitting MLA SV Mohan Reddy and the strong challenger Tumbalam Gooty Bharat, famously known as TG Bharat, son of TG Venkatesh. Although the general elections are well over 1 year, the Kurnool people and TDP leaders are getting curious as to who the ruling party would finalize as the candidate.

Chand Basha Vs Venkata Prasad (Anantapur District)
Notwithstanding the fact that TDP has a strong foothold in Anantapur district, the battle between Kadiri MLA Attar Chand Basha and Kandikunta Venkata Prasad is irking Naidu. YSRCP’s Chand Basha who won over Venkata Prasad had won with a tender margin of only 1000 votes in 2014 polls and subsequently joined TDP. Basha had played active role in TDP before 2014 but jumped to YSRCP when he was denied ticket in 2014. After winning, Basha returned to TDP and this is not going down well with K Venkata Prasad.

On the whole, the Antaryuddham in TDP may turn a great difficulty for the party in the next elections. It needs to be seen how Chandrababu would handle the aforementioned issues. #KhabarLive

Now, A ‘New Rule’ Will Change Your ‘Salary Reimbursements’ Under GST?