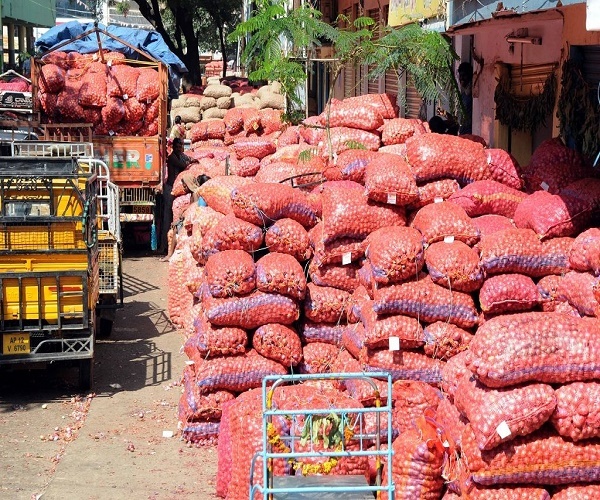 The severe shortage of hard cash has hit the wholesale onion market at Malakpet, the biggest in the capital, with several hundred loads of onion piling up and traders unable to buy the same. With the stocks beginning to decay after lying idle for three days now, wholesalers here are now contemplating to down their shutters for a few days.

The chaos in the market began after prices of onion plummeted, and the situation turned worse when loads of onions began rotting. The collateral damage is now threatening to take a twist, with the consequent shortage of onion in the general market resulting in a price hike as well.

S Narayana, a wholesaler trader at the Malakpet Vegetable Market, said that while all fruits and vegetables saw a marginal to medium dip in prices, onions fell to Rs 200 from Rs 400 for a 40kg bag.

“Middlemen who bought the stock on credit are now unable to pay in cash as many traders are refusing to accept the cash,” he rued.

“I have several quintals of onion going to waste, and there is no way to recover the losses. Nobody is willing to buy and onions cannot be kept fresh for more than a day or two,” said M Chalapati, another wholesale trader.

Most of the stock in the Malakpet market is imported from Karnataka, Maharashtra and Rayalaseema. Every day, nearly 150 trucks of load, based on orders, reach here. With the suppliers too putting pressure for their payment, the situation is quite grim for the traders.

On the other hand, the retail business of onions too has gone down, with vendors unable to sell off their wares.

Even as they are thinking of shutting the market for a few days, the traders at Malakpet, as a first step, have cancelled their previous orders from suppliers in different parts of the country. #KhabarLive