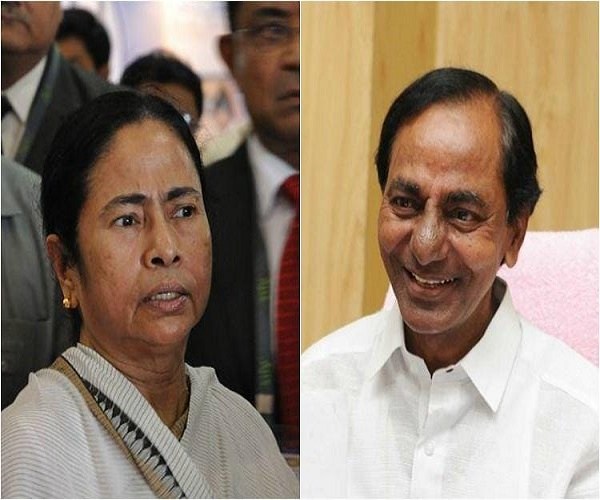 Several regional leaders and Chief Ministers including Andhra’s Chandrababu Naidu, Karnataka’s HD Kumaraswamy, Odisha’s Navin Patnaik have voiced their solidarity with West Bengal Chief Minister Mamata Banerjee, who has accused the BJP-led Centre of using the CBI to target her government. However, conspicuous in his silence is Telangana Chief Minister K Chandrasekhar, who has been pitching for a non-BJP, non-Congress Federal Front.

TRS party leaders say that KCR is maintaining his distance because he wants to remain ‘neutral’ and not get into a ‘political drama’. KCR had called upon Mamata on two occasions urging her to join his Federal Front ahead of the Lok Sabha Elections. Political analysts say that KCR doesn’t want to risk his position and have any direct conflict with the BJP, and also not lend support to Mamata, who has a soft corner towards Congress.

Political commentator K Nageshwar observes that Congress’ support for Mamata in the issue has forced the TRS from showing solidarity to the West Bengal CM “KCR would rather ally with the BJP but not with the Congress, which is the principal opposition party in the state,” Nageshwar said.

To make his opposition against Congress very evident, KCR had even abstained from JD(S) leader HD Kumaraswamy’s swearing-in ceremony in Karnataka.

Nageshwar further pointed out that KCR knows that he won’t gain anything in this fiasco. “The entire thing is helping both BJP and Mamata. It helps Mamata to project herself as the contender and the PM candidate for the alliance,” Nageshwar added.

The CBI went to question Kolkata Commission Rajeev Kumar for his alleged involvement in the Saradha chit fund scam. This move, however, turned into a political showdown between the West Bengal government and the Centre. The state police in turn went on to briefly detain the CBI officials.

Subsequently, calling it a political vendetta, Mamata Banerjee began a dharna to “save institutions, the Constitution and federal structure of the country”, while the Centre approached the Supreme Court on Monday seeking the West Bengal government’s cooperation in the investigation.

Have Tablighi Jamaat Members Misbehaved Or Stripped In Front Of Hospital...