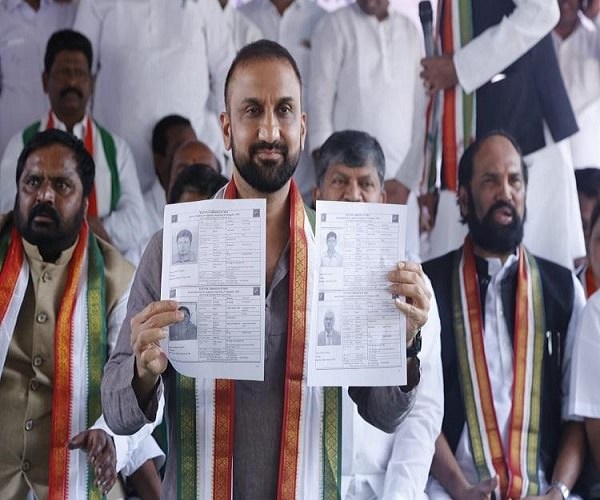 Telangana Congress has created bogus Voter ID cards of the state’s Chief Electoral Officer (CEO) and the former Chief Election Commissioner (CEC) of India, at Nampally constituency in Hyderabad. Congress workers say they created the bogus cards to prove a point to the Election Commission of India (ECI) about shortcomings in the Voter ID registration process followed by them.

The fake Voter ID cards of CEO Rajat Kumar and former CEC OP Rawat, were found to have been registered at the same address at Nampally constituency. Congress workers who created the fake cards told #KhabarLive that these names were added to the electoral rolls prior to the State Election Commission undertaking summary revisions shortly before Telangana went to polls on December 7.

The Congress worker, who did not wish to be identified, said, “We would have released the fake Voter ID cards before the elections itself but decided to wait as it would have just deleted the cards and buried the matter. So, we waited for the elections to get over and decided to release it before the Lok Sabha elections.”

Mohammad Firoz Khan, the Congress contestant from Nampally constituency who had earlier claimed that there were over 40,000 bogus voters in his constituency alone, said, “Only 10 % of these bogus voters were deleted after the summary revisions undertaken in October. I lost the assembly elections this time on a mere 8,000 vote margin.” To back his claim of bogus voters, Khan has submitted proof to both the state Election Commission and the Hyderabad High Court. “The case has been transferred to the Supreme Court,” he added.

So how easy is it to create a bogus Voter ID card?

“All one needs is to create a duplicate Aadhaar card of a person and use a house address which has an electricity bill. The photo and details can be sourced from Whatsapp or from social media accounts, it’s that simple. No one will verify if the Voter ID is genuine or fake,” explained the Congress worker who created the bogus card.

“This is what we are trying to tell the public and the ECI,” says Khan, who on Wednesday along with other TPCC leaders, staged a sit-in at Dharna Chowk where they showcased the fake Voter ID cards.

The task of verifying if the voter information is correct or not is in the hands of supervisors, the Electoral Registration Officers (EROs) and Assistant Electoral Registration Officers (AEROs), who are all from the Greater Hyderabad Municipal Corporation (GHMC). Khan alleges that GHMC has colluded with the ruling party to carry out large-scale “malpractices” in order to rig elections in Telangana.

“And the ECI doesn’t have any mechanism to take out the double and duplicate voters. They have no machinery, no manpower nor do they have the intention. Yes! We have created the fake Voter ID cards of Rajat Kumar and OP Rawat to prove a point,” said Khan, who added that bogus voters are more in the seven constituencies where AIMIM consistently wins elections.

#KhabarLive reached out to Rajat Kumar and various other officials with the Telangana state Election Commission for a comment but did not get a response. However, the Electoral Registration Officer for Nampaly constituency, Mohammad Khaja Inkeshaf Ali told #KhabarLive that an inquiry has been launched to find out how the fake Voter ID cards of top EC officials was created and not removed despite revisions. #KhabarLve