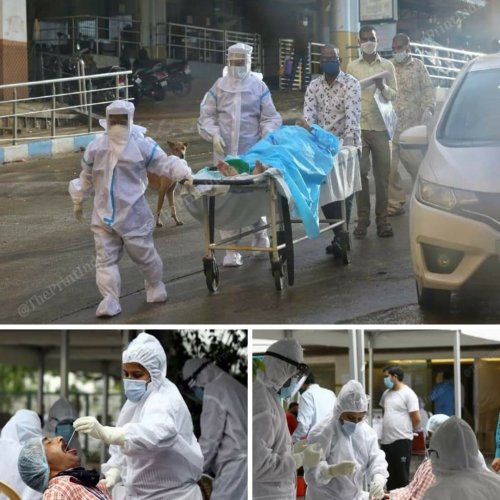 The Telangana government is struggling to combat the ‘Covid Spread’ and the Andhra Pradesh government has ramped up its health infrastructure to test and trace aggressively and provide timely treatment.

At Hyderabad’s Gandhi Hospital, a woman in her 40s could be seen being carried on a stretcher by two healthcare workers in PPE kits from the emergency ward to the Covid ward in another building as it poured heavily one June afternoon. There was no umbrella or anything else for protection from rain as the patient got drenched.

Nearly 300 km away at Vijayawada’s Government General Hospital, ambulances can be seen dropping suspected Covid-19 patients right at the doorstep of the building housing the particular ward. The ambulances are immediately sanitised every time a patient is dropped at the 1,000-bed facility. It is one of the four state-level Covid hospitals in the city, unlike Gandhi Hospital, the only government facility treating Covid patients in Hyderabad.

However, months into the big healthcare crisis, the K. Chandrasekhar Rao government in Telangana seems to have finally taken a few pages out of the Y.S.R. Jagan Mohan Reddy administration’s Covid-19 playbook now.

On 14 June, the KCR government allowed private labs and hospitals to test for Covid, among a host of other measures announced to tackle the spread of the infection. The move came amid widespread criticism for Telangana’s mismanagement of the Covid crisis so far — with the state testing at low levels of 1,533 per million as of 21 June. Its mortality rate is at 2.69 per cent.

In the neighbouring Andhra Pradesh, however, the situation in the last three months has been vastly different.

Aggressive testing and tracing, and timely treatment — the global strategy to fight Covid — has remained the backbone of Andhra’s battle.

The state government has ramped up its health infrastructure and decentralised it, and designated private hospitals as Covid hospitals for severe cases, and others as Covid care centres for those with mild symptoms.

The state is also using its existing village volunteer network for community surveillance and to implement welfare programmes.

However, AP did have one significant advantage over Telangana — the absence of a cluster zone like Hyderabad, which alone is responsible for 71 per cent of the state’s cases.

#KhabarLive spoke to officials in AP and Telangana who talked about their states’ response to the Covid crisis.

Even so, the AP government has already ramped up the testing and hospital facilities after the state recorded the biggest single day spike on 13 June at 294.

“We will be expected to hospitalise 40,000 over the next two months as per our internal technical committee of experts, so we are adding 40,000 hospital beds over the 30,000 we are already equipped with,” said Reddy.

“Whichever private lab was not authorised to conduct tests, I gave them space in government centres wherein they shifted their equipment and had their staff help us out,” he said, explaining how both worked in close coordination.

When the pandemic broke out, the state had one testing laboratory. It has 13 such labs conducting both TruNat and RT-PCR tests now. Four other centres have been set up across the state for voluntary testing.

While Andhra Pradesh has 336 TruNat machines and 42 labs for it, Telangana has 21 machines and one lab, health department officials of both governments confirmed.

Vijayawada collector A. Md. Imtiyaz said, “We encourage people to get tested so that we can trace their contacts instead of waiting for the outbreak to reach its peak here.”

P.V. Ramesh, Additional Chief Secretary to the AP CM, said, “The numbers are bound to increase with relaxations, but we want to diagnose in time so that we can treat and discharge our patients.”

Looking not to rest easy due to the state’s good performance, Ramesh added that apart from community surveillance and testing the high risk category, the government will also test 330 people randomly daily under ‘Sentinel Surveillance for Corona’.

Until 14 June, Telangana had been maintaining that there was no need to test asymptomatic patients, citing guidelines issued by the Indian Council of Medical Research (ICMR).

Doctors confirmed that Andhra has also been testing suspected dead bodies for Covid, according to the ICMR guidelines, unlike Telangana. The latter was pulled up by the Telangana High Court over this.

Speaking on the state’s poor testing rate, Telangana Health Minister Eatala Rajender had earlier told #KhabarLive that the government was following ICMR guidelines. On not testing dead bodies, he said that if one kept testing all dead bodies for Covid, then who will handle the volume of the crisis.

Director, Public Health, Telangana, Dr G. Srinivasa Rao, however, told #KhabarLive it wasn’t fair to compare the two states as Andhra Pradesh does not have as many clusters and “given half of Andhra travels to Hyderabad often”.

“We have intervened and changed our strategies since March 2 as and when it was required. We believe in treating those who require our services,” he said, referring to the decision regarding not treating asymptomatic patients in hospitals.

He also said given the 10,000 to 25,000 tests Andhra was doing daily, it ideally shouldn’t have a single case now “if that’s how they are controlling community spread”.

The Jagan Reddy government has a total of 83 hospitals treating Covid patients in Andhra, of which four are state-level government hospitals, health officials told #KhabarLive.

Speaking about the treatment strategy in Andhra Pradesh, the state’s health secretary said, “We have introduced the concept of Covid Care Centres in AP which are an extension of quarantine centres but with medical facilities and doctors deputed here for asymptomatic or mild symptom patients.”

“We serve them food, we also have psychiatrists, who meet persons here every alternate day,” the centre in-charge Dr V.S. Mohan said, adding that patients are tested after seven days and if they are negative then they are discharged, or else tested three days after that.

Meanwhile, Telangana has been advising home isolation to patients who are asymptomatic or with mild symptoms.

While both states have provided quarantine facilities to foreign returnees, Andhra provides free quarantine centres except for those wanting to pay for hotel accommodation.

In Telangana, several returnees from the Gulf region told #KhabarLive that they were being made to pay for hotel quarantine or being recommended home quarantine for 28 days.

These beds are available across 23 government hospitals out of the total 83 and the remaining are private. At the moment, 20 are being used actively while 63 are equipped to address the spike in cases.

On the recent spike in cases, Reddy said, “The number of foreign returnees as well as those who returned from neighbouring high risk states added to the toll here and also with unlocking, we had anticipated this.”

He added that it also has to do with even more aggressive testing at this point.

Meanwhile, Telangana has 17,081 total hospital beds out of which 11,928 are without oxygen and 3,537 with it. The total also includes 1,616 ICU beds, of which 471 have ventilators, according to the state health department.

Last week, the protest by junior doctors at Hyderabad’s Gandhi General Hospital, the nodal hospital for treating Covid patients in Telangana, highlighted the stress on the state infrastructure.

The one clear disadvantage Telangana has over Andhra Pradesh is the cluster zone of Hyderabad. Out of the state’s total cases, 5,512 are from the Hyderabad district alone.

K. Srinath Reddy, president, Public Health Foundation of India, said there are fewer urban slums in Andhra Pradesh. “There is no major International Airport like Hyderabad. While there is Vizag airport but the number of foreign returnees from there would be way lesser,” he said.

However, according to physician and epidemiologist Giridhar Babu, it’s not as simple. “Andhra Pradesh is not devoid of clusters. Places like Vizag would be as dense in population,” Babu told #KhabarLive.

“The volunteer system has resulted in increasing detection of ILIs (Influenza-like illnesses), history of travel contacts etc. AP has enhanced the testing rates drastically over a period of time. Also, the state has done well for potential surge in cases in enhancing the health system preparedness,” he said.

“AP also got an expert group formed well in time and sought expertise in Covid-19 response well ahead of time. For example, the secretary health had prepared with logistics based on scientific analysis, RO, and was inquiring various experts about syndrome-based approach much earlier before even the guidance was issued by MOHFW (Union health ministry),” Babu added.

Ramesh said village and ward volunteers were hired for Covid to coordinate and implement government welfare programmes in over 10,500 villages. “Under the scheme, there is one volunteer for every 50 households to ensure government benefits each citizen,” he said.

According to government data, accessed by #KhabarLive, 400,000 village and ward volunteers helped survey 14.1 million of the 14.3 million households in the state during the pandemic.

Several government officials said the scheme acted as a bridge between the public and the state.

However, the AP Police began as early as January when students from China’s Wuhan, the first epicentre in the world, returned to Guntur. Following this, in mid-February, 22,266 foreign returnees were traced out of which only 11 tested positive for Covid, according to the AP police department.

The state also claims to be the first to have identified the Tablighi Jamaat returnee in Guntur district in March. “We alerted Telangana, Maharashtra, Karnataka, Gujarat, Chattisgarh and even Rajasthan,” said DGP Sawang.

Speaking about the state response in Andhra Pradesh, Opposition TDP spokesperson Swetha Kesineni said the government has failed to provide aid to its people and is more concerned about the elections.

“They’re busy getting the chief election officer removed, instead of helping the people who are already distraught due to a lockdown,” Kesineni told #KhabarLive, adding that the government had failed to act in real time.

“When the CM says something like that and his government officials themselves don’t wear masks, how will people of Andhra follow them,” said Krishna adding that the attitude was visible in the latest spike in cases. #KhabarLive #hydnews #innlive