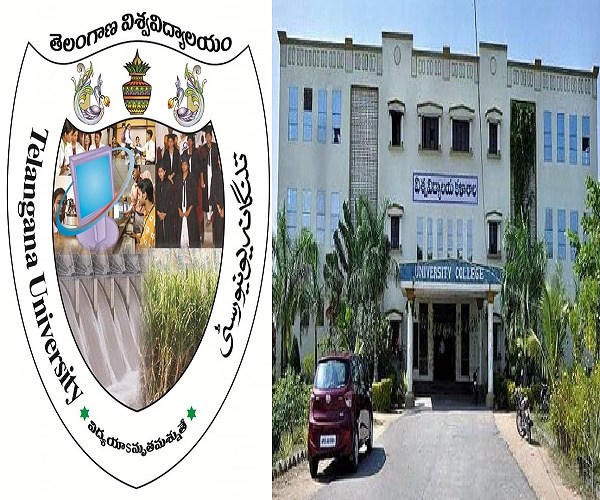 In a new controversy snowballing at Karimnagar’s Satavahana University, ABVP, a right wing students’ group affiliated to the BJP, staged a protest alleging that a section of students from the Telangana Vidyarthi Vedika (TVV) met members of the banned Maoist party.

The ABVP, which sought action against TVV student leaders, also alleged that Prof Sujatha Surepllay and other professors are behind the students. TVV is a student organisation that is at the forefront of right to education efforts and against privatisation of education in Telangana.

In a statement the ABVP leader said, “With the cooperation of one or two professors of Satavahana University, a few students from the Sociology department met with Maoist leaders in the name of TVV and gave an assurance to strengthen their party, this has been revealed on social media and by the intelligence department.” The ABVP leader’s statement was based on a WhatsApp message that claimed that a few students met Maoist leaders during their study tour to Bhadrachalam tribal areas. Calling this proof, ABVP has filed a complaint with the University Registrar seeking action.

Meanwhile,Karimnagar Commissioner of Police Kamalasan Reddy, told #KhabarLive that there was no proof to show that the student group met maoists and said that the allegation does not ‘seem to be true’. The Commissioner however added that the police knew that certain leaders of TVV (not from this particular university, but leaders of the organisation as such) did have ties with maoists and met them periodically.

When #KhabarLive contacted Prof Sujatha Surepally, academic and Dalit activist, she said that she is being targeted as she was talking against atrocities on Dalits in the state. She said, “This is part of their programme to attack my professional career. I have never been part of any such organisation as Ambedkarite, I voiced my support for democratic causes like the release of Prof GN Saibaba. This is an attack on Ambedkarites who are with the people and stand for the students.”

When asked about the study tour about which the ABVP has raised allegations, Prof Sujatha said, “Around 40 students from both MA Sociology first year and second year were taken to Bhadrachalam as part of their Anthropology study tour, which was approved by university officials and in approved vehicle.”

According to the professor, who is also Head of the Sociology Department, the students were assigned individual projects and presentations on different issues related to tribals.

Prof Sujatha alleged that a fake narrative is being built against her as she recently stood with the students in a sexual harassment case, where a professor was alleged to have harassed several girl students from the Botany Department.

Meanwhile, in March this year, a male assistant professor, Dr Penchala Srinivas, was accused of sexually harassing women students by making phone calls to them at unusual times and asking them to meet him personally, and passing objectionable comments about their menstrual health.

Following agitations by the university students’ Joint Action Committee, which TVV was also part of, university authorities formed a three-member committee to probe the allegations. After the committee submitted its report, the University Registrar took disciplinary action against the accused assistant professor.

Students from TVV and Prof Sujatha alleged that they are both being hounded in the name of Maoists as they were at the forefront in questioning the sexual harassment and other atrocities in the state.

Speaking to #KhabarLive, Karike Mahesh, TVV leader and second year MA Sociology student, alleged that university authorities and ABVP have teamed up to spread misinformation about them.

Mahesh was also part of the tribal issues Anthropology study trip along with his classmates and juniors. When asked about the study trip in question, he said, “We all went together on the academic trip, each of us has to finish a 100-mark project which also includes a presentation. We visited tribal villages, the entire project was recorded and assignments were written as per the curriculum.”

When asked about the allegations of meeting leaders of banned Maoist Party, Mahesh said, “If anyone has any evidence of this, they can come for a debate, we are ready to face it.”

When #KhabarLive reached out to University Registrar U Umesh Kumar about the controversy, he said that he had come to hear about the same through social media, adding: “The allegation is that the students went up to Chhattisgarh though they were permitted to go only till areas near Bhadrachalam. Yesterday the ABVP filed a complaint seeking an inquiry, however, these are mere allegations.”

Umesh Kumar also stated that since the allegations surfaced from WhatsApp, the Vice Chancellor may or may not consider taking further action, while asserting that there was no such situation on campus and that everything was peaceful.

When asked about TVV’s allegation that the ABVP and administration were colluding to link them to Maoists because they (TVV) protested against the assistant professor who was accused of sexual harassment, Umesh Kumar said, “Those allegations are untrue, this didn’t happen in view of that incident.” #KhabarLive

Gandhi Is Only About Cleanliness? Really, A Hurtful Campaign!