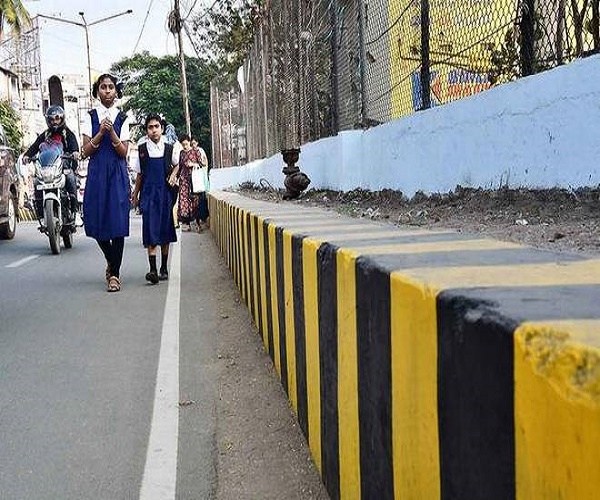 To put things in perspective, the average height of a study table is about 2 ft 6 inches. The Ministry of Urban Development guidelines known as ‘Harmonised guidelines for space standards for barrier-free built environment for person with disability and elderly persons’ issued in 2016 specify that footpaths “be not more than 150 mm high”. The Ashoknagar footpath is precisely five times higher than the specification.

On Thursday, when we set out to measure the height of the footpaths, a class VIII student had to be helped to get on to it. The walkway reached above the knees of most pedestrians, compelling them to walk on the narrow road braving onrushing vehicles. To make the situation worse, the ongoing civic work is set to block the access to the footpath from Domalguda side.

The cinder block kerbstones have a height of 2.5 feet with a portion that has to be buried to ensure it stays vertical. But at multiple locations including near Lifestyle building, Jubilee Hills Road no. 1 near JVR Park and Raj Bhavan Road, the kerbstones remain high, making the resulting footpath inaccessible.

While absent or encroached footpaths are an issue that gets attention from time to time, it is sheer uselessness of footpaths that is forcing pedestrians to walk on the roads. “We have to keep the footpath higher than the road. At many places, the roads have reached the footpath level resulting in two-wheeler riders driving on the latter,” said a Greater Hyderabad Municipal Corporation staffer working on on a footpath stretch near Jalagam Vengala Rao Park.

The footpath is so high that two ramps have been built to make the toilets on the pavement usable. Ironically, it is the same footpath that was laid in a hurry just before the visit of Ivanka Trump for the Global Entrepreneurship Summit.

Once a part of a footpath remains unused, the rest of the stretch too becomes redundant. At Ashoknagar, the unused footpath stretch is followed by a long stretch towards Indira Park that is now occupied by seasonal vegetable sellers. According to Hyderabad Traffic Police, of the 1,209 road fatalities in the first six months of 2018, 430 were of pedestrians. While fatalities of two-wheeler riders were 50%, pedestrians constituted 36% of road fatalities.

A number that can directly be correlated to missing or unusable footpaths. The newly active Director of Enforcement, Vigilance and Disaster Management of GHMC, has tried to clean up the pavements. By February first week, about 15,446 encroachments were removed, according to GHMC statistics. But the issue is that of long stretches that are still unusable. #KhabarLive

Is ‘Tussle Brewing’ Between ASI And GHMC Over Part Of ‘Charminar...