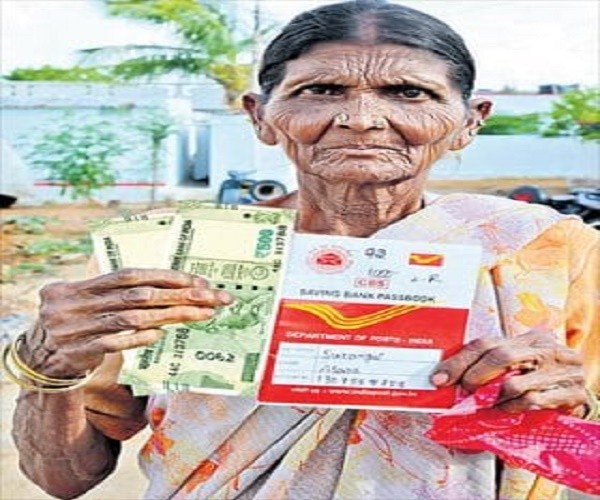 Reaching the voter through direct mail is considered one of the most effective outreach strategies. In a unique electoral exercise, Chief Minister and TRS president K Chandrashekhar Rao is planning to reach out to every beneficiary and showcase the huge bouquet of widely acknowledged welfare schemes implemented by the State government in the past four and half years.

(The picture speaks thousand words itself. Our intelligent readers will understand the news content perfectly. – Editor)

The Chief Minister will write over one crore letters to the families covered under the multiple schemes, which is certain to bring about the desired change in the voting outcomes, according to the TRS general secretary and MLC Palla Rajeswar Reddy.

“The party is seriously considering this mass outreach programme and the modalities will be finalised in a couple of days”, Rajeshwar Reddy told #KhabarLive. The TRS government has reached out to almost every section of society, catering to their needs under multiple schemes and almost every initiative has had a positive impact on their lifestyles.

If the overwhelming response being received by the party nominees during their campaign in the constituencies is any indication, people will be out to reciprocate in a big way. A majority of the schemes are unique to the State and their implementation was possible only because of the proactive role played by Chandrashekhar Rao in implementing them.

ALSO READ:  'Tolichowki' - The Most Happening Place For 'Food Craving' In Hyderabad

The Chief Minister, who has already launched the election campaign and covered a few districts, will be shouldering the task of sending letters to the electors, reminding them of their responsibility as voters committed to the development of the State.

The letters, which will be beneficiary-specific, will be drafted soon, he said. The Chief Minister is confident of an overwhelming mandate again in the December 7 polls as more than half of the 2.73 crore electorate in the State have reaped the benefits under at least one welfare programme, and in most cases from multiple schemes.

A majority of the 51 lakh farmers’ families that have been receiving the agriculture input assistance of Rs 4,000 per acre, per crop under the Rythu Bandhu scheme, are also covered under the Rythu Bhima, crop loan waiver and land records purification.

Supply of KCR Kits, distribution of 80 lakh sheep to the Golla and Golla communities, construction of double bedroom houses and a host of other programmes have also been a boon for the people of the disadvantaged communities in the State.

Chandrashekhar Rao will not only speak about the scores of schemes but will also summarize his plans for the development of the State in the future. #KhabarLive

Finding The ‘Challenger’ To KCR For The ‘General Elections’ In Telangana