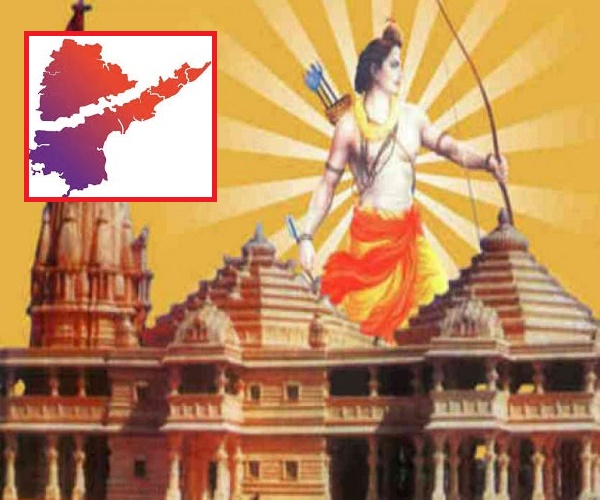 Politically, the BJP has been unable to reap dividends from the shrill campaign for Ram Mandir in Andhra and Telangana. Apart from these no secular party raised a concern nor any Muslim front confronted.

For almost ten days after Prime Minister Narendra Modi performed the Bhoomi Pujan at Ayodhya, the Andhra Pradesh unit of the BJP harped on the ‘blasphemy’ committed by TTD-owned Sri Venkateswara Bhakti Channel (SVBC) for not airing the Ayodhya event live on 05 August.

It was an insult to Lord Rama, shouted BJP leaders. According to the saffron party, almost 250 channels across the globe telecast the program live, except for the SVBC.

But despite their angst, Telugus once again demonstrated their emotional detachment with Ayodhya politics.

Why Ayodhya Does Not Strike A Chord In Andhra?
Ayodhya politics, including LK Advani’s rath yatra of the 1990s, has not struck a chord with Telugus in the past two decades.

This, despite the erstwhile united Andhra Pradesh, is said to have been one of the major contributors of Kar sevaks after Maharashtra, Madhya Pradesh, Karnataka, and Gujarat.

Ram Mandir politics may have helped the BJP electorally in the other states, but in Andhra and Telangana, the war cry of “mandir wahin banayenge” (we will build the temple only there) had not touched Telugus.

For the past two weeks, AP has been reporting 6000 to 10,000 fresh COVID-19 cases a day. There is concern over the unavailability of beds, ICU facilities, and oxygen in hospitals. Local lockdowns have been re-imposed in many districts. As many as 80 fatalities are being reported a day, on average. The death toll is inching towards 3000.

Amid this crisis, the BJP may have hoped that the temple issue would put a spotlight on the otherwise marginalized party. It was a colossal failure.

The Telugus’ Bond With Lord Rama
Telugus have a peculiar bond with Lord Rama. Interestingly the Telugu’s Rama is Santhi Ramudu (messenger of peace). Though the Telugu regions were under the control of Nawabs for centuries, the Rama cult was not disrupted. Instead, it got spiritual support from the local Nawabs.

The legend of Bhadhrachalam bears testimony to this. Bhadrachala Ramalayam and keertanas of Ramadasu, who built the temple, are intertwined inseparably with the cultural life of the Telugus. For Telugus, Lord Rama means Bhadradri Ramudu (Lord Rama located in Bhadradri) alone, and all other Ramas come later.

According to the legend, Kancharla Gopanna was Tahsildar of Husnabad, where Bhadrachalam is located, under Golkonda Sultan Tana Shah. A devotee of Rama, Gopanna considered himself a servant of Rama and this gave him the moniker Ramadasu.

Having discovered three statues of Rama, Sita, and Lakshmana, through a dream of a tribal woman, he started constructing a temple, which in due course grew bigger and led to a paucity of funds.

He then diverted government funds to complete the structure. Upon discovering the misappropriation of the treasury, the Sultan jailed him in Golconda.

Unable to bear the trauma of jail life, he sang paeans for Rama for solace. The songs are known as the Ramadasu keertanalu. In these songs, Gopanna at times almost quarreled with and scolded Lord Rama for not coming to his rescue.

Finally, a miracle happened. Lord Ram appeared before the Sultan, not to slay him with his powerful arrow for incarcerating his devotee, but to humbly repay the money diverted for temple construction.

The next day, the Sultan himself ran to the jail, opened the cell door, and released the tahsildar. He also granted a jagir of three villages for the maintenance of the temple. From then onwards a tradition of presenting jewels to Rama and Sita by the Golconda government came into existence.

The tradition was honored during the reign of the Nizams as well. And now, continuing the ritual, the chief minister of Telangana presents gifts to Rama and Sita on Sri Rama Navami.

While this happened in the 1630s, something more interesting took place around 1812 when another Ramalayam was consecrated in Hyderabad.

Raja Bhavani Pershad, a civil servant in Nizam’s government constructed a temple for Rama in Attapur, Hyderabad. It is still popular in the area of Rambagh. A trusted officer of the Nizam, Pershad invited the third Nizam, Nawab Sikandar Jah, to the statue installation ceremony.

The Nawab watched the proceedings of the statue-installation ceremony. Pleased at the honor extended to him, the Nawab granted a jagir for the temple maintenance and sanctioned wages for priests who would take care of the shrine.

Barring a few occasions such as Razakar’s (1948) atrocities during the last leg of Nizam rule and communal disturbances during the 1980s, the Telugu regions were relatively free from communal disturbances. Even when the popular Tirumala-Tirupati temples were under the control of the Nawab of Arcot for centuries, until they were transferred to the British East India Company in 1801, nothing inappropriate had happened.

Like temples, dargahs of Sufi tradition are also popular in these parts of south India. Urs celebrations of Sufi saints attract people from all religions. When sick, people turn to these dargahs for recovery.

Telugus have remained loyal to their own Rama, Balaji, and local secular babas like Satya Saibaba and Shirdi Saibaba, and mother goddesses such as Peddamma, Mysamma, and Pochamma, especially in Telangana.

Caste Equations Behind Ram Mandir Issue
Why have the Telugu people been so apathetic towards BJP’s mandir politics? A Telugu language activist from Kurnool, Kuradi Chandrasekhara Kalkura said it was the result of BJP’s sectarian politics in mandir construction.

“Telugus are not averse to Ram mandir. BJP with an eye on vote bank politics refused to universalize the mandir movement. The campaign has remained BJP’s own political campaign. So, the majority of Telugu OBC communities are convinced that what was coming up at Ayodhya was a ‘BJP mandir’. OBCs are the muscle of Hindu society.

Without their participation, no political movement moves forward. In Telugu states the BJP campaign is confined to a few upper castes like Brahmins and Vaisyas,” Kalkura told #KhabarLive adding that these two communities are minuscule in number.

Professor S Simhadri, Telangana Samajwadi president, and former faculty member of Osmania University also expressed a similar opinion. “OBCs are not available for BJP’s mandir campaign in Telugu states and the Brahmins, unlike in North where they constitute 10% of the population, are not in a position to give political leadership to Telugu society.

In the north, OBCs have got swayed by the Brahmins’ temple campaign. In Telugu states, strong non-Brahmin political parties have been successful in winning over these sections,” Professor Simhadri told #KhabarLive.

Ayodhya may at best become another tourist spot in north India for Telugus. Political dividends continue to remain a dream for the BJP, at least in the Telugu states. #KhabarLive #hydnews