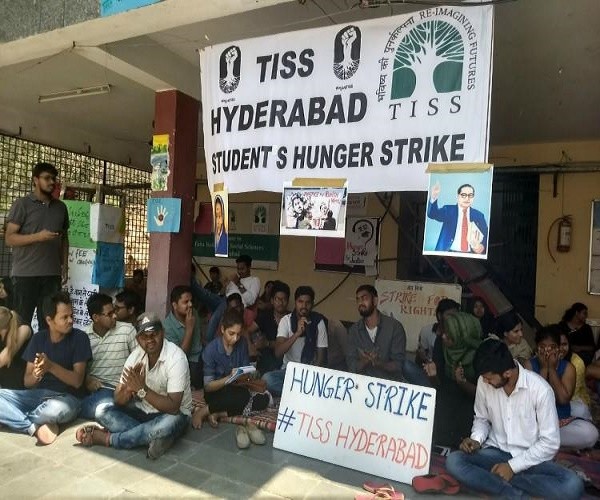 Students of Tata Institute of Social Sciences, Hyderabad are planning a hunger strike from Monday, December 10, to protest against the administration’s decision to scrap the BA social sciences programme and also to make the campus a non-residential one.

The students, who are coming back to the campus after their semester break, have already designed posters and campaign material and have vowed to protest relentlessly unless the administration rolls back its decision. The students have also announced a social media campaign.

Earlier in November, the administration had announced that the BA Social Science course on the Hyderabad campus will be scrapped and had also shut down its hostel facility, when the students were on a break. The students had then alleged that it was a strategic move by the management to take such a decision while they were away, aware of the protests it would trigger if the students were on campus. However, during their semester break, the students started an online campaign with Change.org. against TISS.

Speaking to TNM about their protest, an MA student, on condition of anonymity said, “Students who are returning back to campus will join in the protest. We will intensify our struggle and go a strike to achieve our demands.”

“Our demands are very basic: re-introduce the BA programme and drop the plan to convert the residential campus to a non-residential one,” he added.

In their online petition the students wrote, “Despite being one of the few government-funded undergraduate programmes offering quality social sciences education with an interdisciplinary approach, the institute decided to cancel the BA Social Sciences programme without officially providing any reason.

ALSO READ:  Why Telangana Tribal NREGA Workers Demands To Resolve Their 'Issues' To Political Parties Ahead Of Elections?

Being primarily funded by the Government, students from marginalised sectors could afford relatively, a social science programme which has a curriculum highly relevant for each person to become strongly-opinionated and question the rigid oppressive structure that has been normalised for so many years,”

Though the administration had earlier clarified that the decision to shut down the hostel facility was only temporary, because they were planning to construct their own facility, the students are not convinced of their claims. Presently, the Hyderabad campus does not have a permanent facility and is located on a land leased out by the Telangana panchayat department in Rajendra Nagar.

The students lament that the decision to shut down hostels would greatly affect the students coming from marginalized communities, who cannot afford private accommodation. #KhabarLive