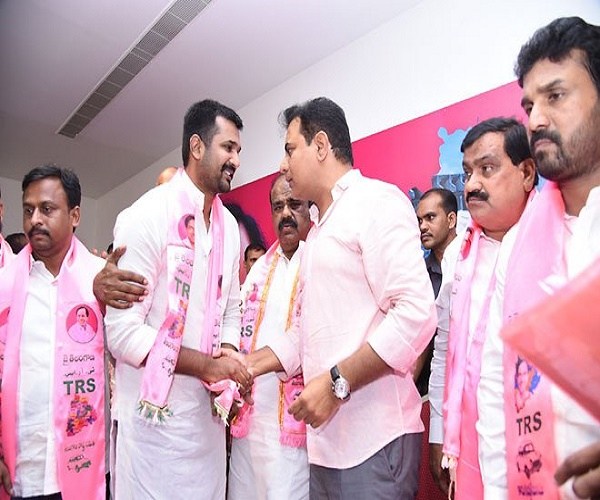 Quite a few persons, including elected representatives belonging to different political parties, are joining the Telangana Rashtra Samithi. For some, it may be unethical but for others, it may be a necessity and need of the hour.

The reasons for switching allegiances stem from the fact that they are fascinated by the welfare and development schemes of the Chief Minister. Another factor could be that the political parties of those elected representatives might have failed to play the role of true opposition. Moreover, even the opposition parties do admit people from the TRS as and when some of them show interest. Thus, floor crossing from one party to another differs only in degree, and so criticism from any corner should be viewed in that context.

The Law
Taking shelter under the anti-defection law, the opposition parties in Telangana, in a bid to get their defected legislators disqualified as members of the Legislative Assembly, are approaching courts. The legislators in question have issued statements that they would like to work under the leadership of Chief Minister K Chandrashekhar Rao for development of their constituencies since they promised this to the voter during elections.

Though there are enough provisions of the anti-defection law that could be interpreted either way, well-laid conventions are, however, absent. Functioning of parliamentary democracy depends more on conventions rather than legal provisions.

Different Variants
The anti-defection law, in the form of Tenth Schedule to the Constitution, passed in 1985 through the 52nd Amendment during the regime of Rajiv Gandhi to combat the evil of political defections seldom achieved its purpose in any State. India, in fact, enacted different variants of anti-defection laws in 1973, 1985 and 2003.

The 2003 law provides that a person can be disqualified from serving in Parliament for “voluntarily giving up the membership of his original party”. Furthermore, the law permits parliamentary expulsion simply for voting (or abstaining from voting) “in the House contrary to any direction issued by the political party to which he belongs”. The law on defection “seeks to provide safety measures to protect both the government and the opposition from instability arising out of shifts of allegiance”.

It is argued that the law while deterring defections might lead to suppression of dissent in political parties. When an elected member feels that his party is not in a position to implement electoral promises, s/he is left with no alternative except to quit the parent party. In a way, the anti-defection law restricts representatives from voicing the concerns of their voters in opposition to the official party position.

Other Nations
An analysis of GC Malhotra, former Secretary General of the Indian Parliament, reveals that only seven of 25 non-Commonwealth nations had anti-defection laws and none cost members their seats for voting against their parties. Anti-defection laws are rare in established democracies but common in nascent democracies. The general impression is that, in certain respects, the degree of democracy is clearly associated with the occurrence of restrictions on political parties. The most important line of demarcation seems to run between established democracies and other States.

Established democracies have few restrictions on parties. Switching sides has been common in countries like South Africa, Japan, Bolivia, Ecuador, Nepal, Russia, Philippines, France, Italy, and Brazil. Even in the United States, with its stable two-party system, some members serving in the House and Senate change their parties from time to time.

There are advantages and disadvantages with the Indian anti-defection law. It provides stability to the government by preventing shifts of party allegiance, ensures that candidates elected with party support and on the basis of party manifestoes remain loyal to the party policies. It also promotes party discipline. On the other hand, by preventing parliamentarians from changing parties, it reduces the accountability of the government to Parliament and the people. It interferes with the member’s freedom of speech and expression by curbing dissent against party policies.

Supreme Court’s Judgments
There are judgments on disqualification of members and the Tenth Schedule by the Supreme Court from time to time. On whether the right to freedom of speech and expression is curtailed by the Tenth Schedule, the court observed that the provisions do not subvert the democratic rights of elected members in Parliament and State legislatures. It does not violate their conscience.

On several other issues, the court observed that: Once a member is expelled, he is treated as an ‘unattached’ member in the House. However, he continues to be a member of the old party as per the Tenth Schedule. If he joins a new party after being expelled, he can be said to have voluntarily given up membership of his old party.

Against this background and under the present circumstances, all those sections seeking development of the State are coming together to work for the welfare of the State. Telangana has now achieved political and economic stability. This process would go on. Maybe polarisation is an inevitability and the need of the hour. #KhabarLive