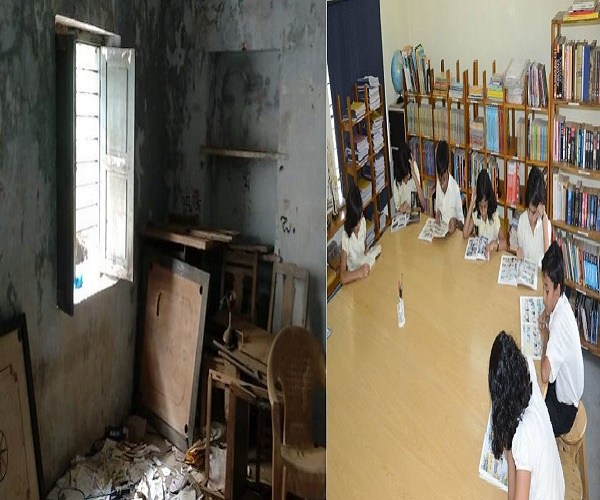 When the newly elected Tadiparthy Sarpanch D Ramaesh and the village upper primary school headmaster K Raju wanted to build a public library, they had to run from pillar to post. The villagers claim they received no help from the district administration and are now on a quest seeking donors to help build the library.

The villagers at Tadiparthy in Yacharam Mandal of Telangana know that in a decade their village would be part of the upcoming Pharma city in Hyderabad, whether they want it or not. However, they were defiant and in retaliation, voted for an independent sarpanch as a snub against the candidate fielded by the ruling party in Telangana, the TRS.

“We want to develop the school into a technical school fit for the digital age,” says Raju, the headmaster who took charge of the school in 2013. “We had won the award for the best school from Rangareddy district; for education, sanitation and overall performance from the district collector for two consecutive years,” he adds.

But this award-winning school does not even have proper access to water and is in a state of neglect, says the headmaster. ”I have been writing to the Education department for the past three years to convert a dilapidated room in the school into a classroom, but I have received no response till date.”

The headmaster of this primary school, like all other primary schools in the state, has to manage infrastructure upgrade within Rs 10,000 given by the state government. “But that Rs 10,000 is used for awareness programmes and activities to attract the students to join government schools and not private schools,” he adds.

This state government school needs donations to even conduct minor repairs to their blackboard. “One person settled in the city donated Rs 1 lakh and we bought benches, repaired blackboards and did other repairs,” adds Raju.

Many of the students at the school are unable to buy notebooks and it’s often the teachers who buy them notebooks out of their own money. “While some can’t afford, there are some who don’t have access due to neglect by parents, they are not interested in their child’s education. We try to change their mindset,” says Raju.

The village is all set to change once the project consumes their village farmlands, and Ramesh, a biochemist by profession before becoming the sarpanch of the village, is aware of this. The youth are on a mission to develop the primary school in his village to meet those aspirations.

ALSO READ:  'Sleepless Nights' By TDP Leaders Over IT Raids, Worries Who's Next On Fire!

The school hopes to convert their dilapidated room into a public library and is in need of furniture like chairs, tables, shelves.

The school is also in need of books for children, story books, general knowledge, English language learning and activity books that are in good condition. Second-hand books are also welcome. The school also requires donations for yearly newspaper subscription and two ceiling fans.

Those who wish to contribute can contact the village sarpanch, D Ramesh at 9032861343 and also contact documentary filmmaker, Saraswati Kavula at 7995792102.

“We also need projectors for the students, the old TV that we have hurts the children’s eyes. We also need a few benches and tables,” says Raju.

The Education Department officials, the Sanga Reddy Collector and the local MLA were unavailable for comment. #KhabarLive