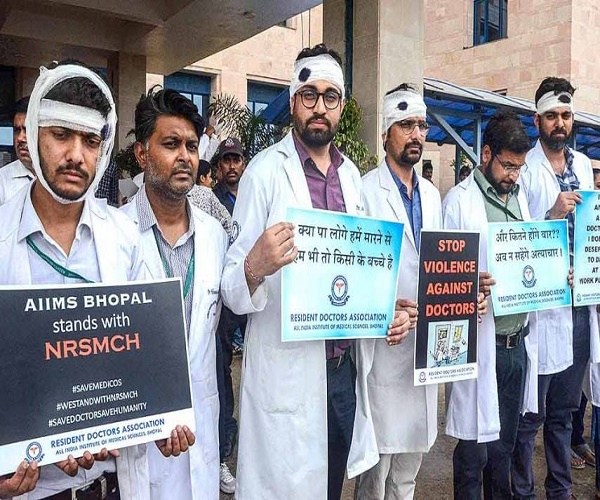 Who would have thought that being a doctor could be dangerous? There are professions — journalism to performing stunts — that carry the threat of violence or injury at the workplace. There can be mechanical failures or animal related accidents, but you wouldn’t think that medicine could feature on the list of dangerous jobs. India spends little over 1% of its GDP on healthcare, perhaps among the lowest in the world.

The medical profession has always had a halo around it. Being a doctor is a big deal, a coveted goal, especially for Indian parents. Having ‘Dr.’ prefixed to your name commands respect and admiration. This is precisely why it is surprising to know that the Indian Medical Association (IMA) notes that up to 75% of the doctors across the country have faced some kind of violence at work. Where does all this anger come from?

Over the years, time and again, we have seen instances of threats, intimidation, vandalism and physical assault. Verbal abuse is common, and it can quickly snowball into physical violence. A junior doctor in Kolkata was attacked with bricks after a patient died.

ALSO READ:  How Mobile Apps Can Track And Store Your Medical History, Data And Personal Information?

The hospital became a battleground, with a mob barging into the premises and pelting stones. The IMA has called for a nationwide strike on June 17 and withdrawal of nonessential health services to protest against the assault. Seven hundred doctors have resigned.

The crisis has crippled healthcare services in West Bengal and is now beginning to find resonance across India. Doctors in AIIMS wore helmets and badges to show their solidarity, and doctors across other cities are also staging demonstrations to protest the increasing violence at their workplaces.

When you’ve just lost a loved one, it is easy to blame the doctor, but the fault perhaps lies deeper within. India spends little over 1% of its GDP on healthcare, perhaps among the lowest in the world. The doctor-patient ratio is dismal – below 1:1000 prescribed by the WHO. The Modi government has passed the National Health Policy which commits to spending 2.5% of our GDP on healthcare. But that is not enough. We need more doctors, better infrastructure, pharma companies must be monitored for prices of drugs, insurance coverage needs to be broadened and hospitals need to be more accountable.

Government hospitals remain apathetic. They employ only about 1 lakh doctors out of about 9 lakh registered professionals in the country. It is no surprise doctors are overworked, underpaid, slogging it out in poor conditions and shoddy infrastructure. The people, on the other hand, have no choice but to turn to private establishments.

But that’s not economical. In India, a visit to the hospital pushes 5.5 crores of people below the poverty line every year. Private out of pocket expenses dominate the cost, medicines are exorbitant and insurance penetration is very low. There is no financial support and often the patient’s loss of income compounds the problem. Also, most healthcare delivery is provided by smaller hospitals and nursing homes with about 30 beds, which make them susceptible to violence and aggression, especially during billing disputes.

Almost every doctor today is worried about facing violence, and yet very few are trained to deal with the situation. The medical curriculum covers clinical behaviour, but perhaps it should also include empathy. Doctors need to be taught how to handle aggressive, disgruntled patients and their families in stressful situations.

Trust is central to the doctor-patient relationship. It reinforces the partnership, increases the probability of patient satisfaction, adherence to treatment and improved health status. Communication is critical – how to break the bad news, to bridge the information gap, to explain the procedure and so on. It can go a long way in resolving disputes. But in the current scenario, given the huge workload, long hours, the lack of staff and other resources this is usually not practical.

The doctor-patient relationship forms the core of the ethical principles of medicine. But the bedrock is the institution – the hospital – a business enterprise. Its aim is to make profits. Patients are usually wary of being overcharged or put through unnecessary procedures to make money.

On the other hand, there are often unrealistic expectations that high costs and modern technology should lead to success. The rising cost of healthcare and the lack of transparency are the key reasons for the breakdown of trust. It is an uncomfortable relationship and often doctors are caught in the middle. #KhabarLive