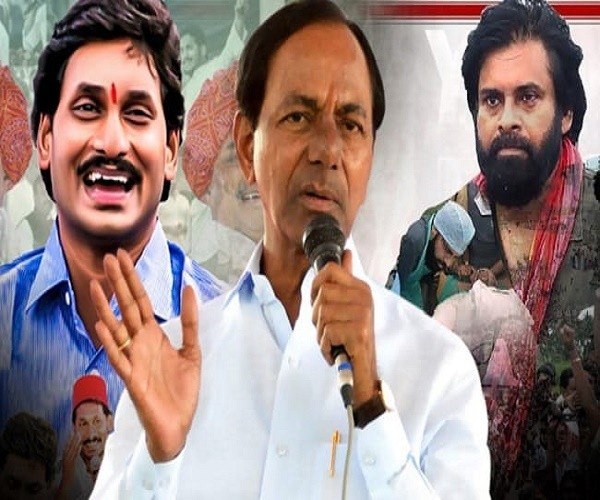 Apparently, KCR has realised that the TDP would be in advantageous position as long as there was no unity among the opposition parties in AP.

Till the other day, there was a talk that the two main opposition parties – YSR Congress party and Jana Sena might come to an understanding in the elections to defeat Naidu.

But after YSRC president Y S Jaganmohan Reddy’s outburst against Pawan, raising the issues of latter’s personal matters and Pawan’s serious counter-attack questioning the alleged corrupt practices of Jagan, the hopes an alliance between the two parties have been shattered.

Though Jagan has stopped attacking Pawan after that, the latter has been criticising YSRC chief on and off in his public meetings.

According to the latest reports, KCR has taken up the responsibility of bringing about a patch-up between Jagan and Pawan.

It is an open secret that the TRS government has been protecting the business and commercial interests of both the leaders in Hyderabad.

And KCR’s son K T Rama Rao has been in constant touch with Jagan and Pawan. Following the directions from his father, KTR is trying to bring both of them together. Of course, the Bharatiya Janata Party is anyway there, extending backroom support to both.

That is perhaps why Pawan appears to have softened his stand towards Jagan in the last couple of days.

He even said Jagan was not his enemy in politics and that he had not come into politics to become the chief minister but to serve the people.

If KCR’s succeeds in his attempts, it will be a big blow to Naidu in Andhra Pradesh elections! #KhabarLive

Is AIMIM Stamped ‘Sign Of Change’ In ‘Muslim Politics’?