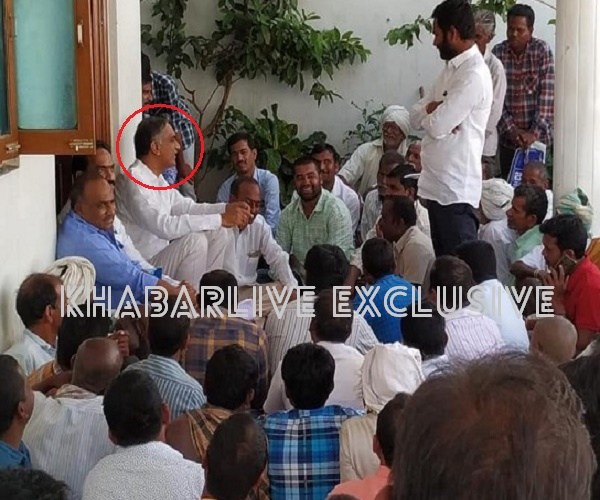 A picture of TRS leader and Siddipet MLA T Harish Rao sitting on the floor along with his supporters at his house in Siddipet has gone viral on social media. The picture reflects the present pathetic condition of Harish Rao in TRS which even thousands of words can’t describe the amount of humiliation, isolation and insult he is being subjected to by KCR, KTR, Kavitha and Joginapally Santhosh Kumar.

Not only Harish supporters in TRS, even other leaders and cadre in TRS, Opposition parties and general public feel pity for Harish Rao at the way he is being ignored, sidelined in TRS, the party for which he worked day in and day out sincerely and committedly especially in times of trouble and crisis the party faced since its inception in 2001.

He was fondly called as ‘trouble shooter’ in TRS as Harish saved TRS and KCR from every crisis they faced during Telangana statehood agitation.

But after KCR became CM, he gave preference to his son KTR, daughter Kavitha and nephew J Santhosh Kumar and sidelined Harish gradually.

By the end of KCR’s first term and KCR retaining power for second term, the situation of Harish worsened to such an extent that he is now forced to confine to his residence in Siddipet. He can’t cover even his Medak district, let alone coming to Hyderabad.

With this, Harish is now holding ‘election campaign’ for TRS at his residence. He is sitting on the floor along with the people of Siddipet at his house and doing campaigning all through the day.

While KCR, KTR, Kavitha are addressing huge public meetings, visiting all the districts, poor Harish has been confined to his Siddipet house.

Except feeling pity for Harish, no leader or activist in TRS dare to question the injustice being meted out to TRS or come in support of him fearing KCR & Co.

They express anger in their internal discussions over how they reduced Harish from a ‘state level leader’ to a ‘village level leader’ like Sarpanch. #KhabarLuve

A Trip To ‘Gudimalkapur Flower Market’, An Experience Of A ‘Vivid...

Why The Haj Committee of India Earns Interest On Pilgrims’ Money,...