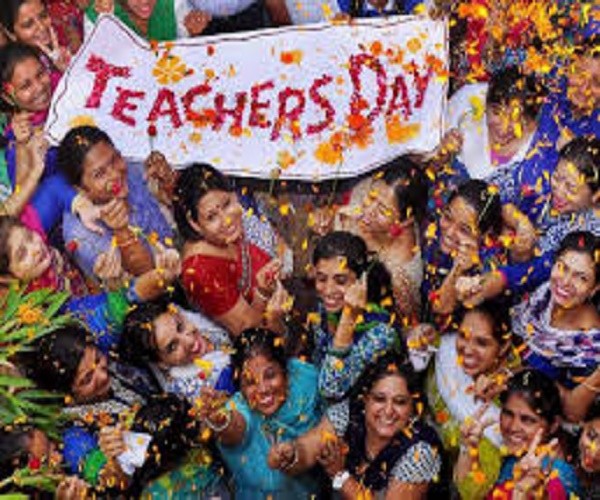 In India, 5th September is celebrated as Teachers’ Day as a mark of tribute to the contribution made by teachers to the society. 5th September is the birth anniversary of a great teacher Dr. Sarvepalli Radhakrishnan, who was a staunch believer of education, and was a well-known diplomat, scholar, the President of India and above all, a teacher.

When some of his students and friends approached him and requested him to allow them to celebrate his birthday, he said, “instead of celebrating my birthday separately, it would be my proud privilege, if 5th September is observed as #TeachersDay. From then onwards, the 5th of September has been observed as Teachers Day, in India.

In the year 1965, some of the prominent students of Late Dr S. Radhakrishnan organised a gathering to pay obeisance to that Great Teacher of repute. In that gathering, in his speech Dr Radhakrishnan expressed his deep reservation regarding his birth anniversary celebration, and emphasised that his birth anniversary should be celebrated as ‘Teachers’ Day’, by paying homage to other Great Teachers of India and Bangladesh. Since the year 1967, 5th September is celebrated as Teachers’ Day till date.

Teachers’ Day 2018 Celebrated on September 5 every year, since 1962, the year in which Dr Sarvepalli Radhakrishnan started serving as the second President of India, the country has been celebrating his birth anniversary as Teachers’ Day to commemorate his work.

Happy Teachers Day 2018: Every year, September 5 is observed as Teachers’ Day in India to mark the birth anniversary of Dr Sarvepalli Radhakrishnan, who was born on September 5, 1888. A great scholar, philosopher and a Bharat Ratna recipient, Dr Radhakrishnan was the first Vice President and second President of independent India.

Dr Radhakrishnan was a celebrated academic. Born into a Telugu family, he graduated with a master’s degree in Philosophy. He wrote – ‘The Philosophy of Rabindranath Tagore’, which was his first book in 1917 and placed Indian philosophy on the world map. Later, he taught at Chennai’s Presidency College and Calcutta University. He also served as the Vice Chancellor of Andhra Pradesh University from 1931 to 1936. In 1936, Dr Radhakrishnan was invited to teach Eastern Religions and Ethics at Oxford. He held the position for sixteen years.

It is believed that Dr Radhakrishnan said that it would be his “proud privilege” if his birthday was observed as Teachers’ Day. So, since 1962 – the year in which he started serving as the second President of India, the country has been celebrating his birth anniversary as Teachers’ Day to commemorate his work.

To mark his birth anniversary, on the occasion of Teachers’ Day, students across the nation honour their teachers and thank them for their endless efforts in educating them. Schools and colleges often host special programmes to celebrate their presence.

It is on the teachers that the burden of passing knowledge onto the future generation lies on. They shape the world in their classrooms, year after year. This day celebrates their contribution to the society and honours their endeavour. #KhabarLive

Meet ‘Sindhe Mohan’ – The ‘Jewellery Supplier’ Of ‘Theatre Artistes’ In...

To Combat With ‘Seasonal Sniffles’ Add ‘Immunity Boosters’ To Your Diet