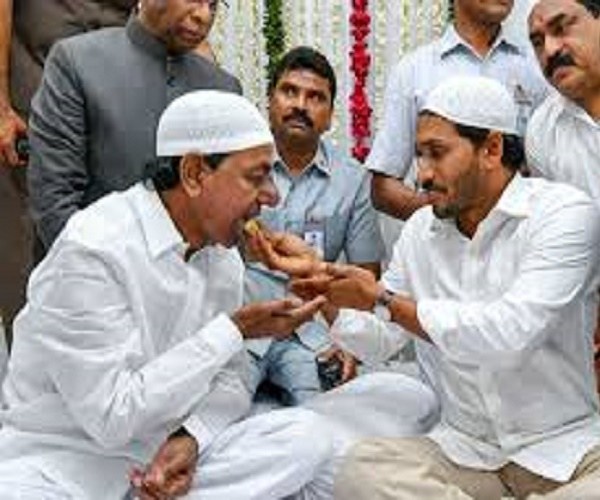 The Telangana Chief Minister KCR, as Chandrasekhar Rao is widely known, was a special attraction on the soil of his hostile neighbour. It’s his second public appearance since the state bifurcation after the foundation laying ceremony of the new capital in Amaravati during the TDP regime headed by N Chandrababu Naidu.

With a hug, AP CM Jagan Reddy and KCR exchanged pleasantries and shared jubilation over the YSRCP winning the general elections in Andhra Pradesh. The meeting of the chief ministers of two neighbouring states amidst sibling clashes triggered a debate with a mix of hope and despair over healing of wounds inflicted by the bifurcation in 2014.

As the maxim goes, an enemy’s enemy is a friend, thus Jagan and the TRS chief turned strange bedfellows in the run-up to the Telangana state elections held in December 2018. It may be recalled that Jagan was strongly opposed to the state bifurcation. And Jagan’s ‘odarpu yatra’, intended to console the families of those who committed suicide over the untimely death of his father YS Rajasekhar Reddy, was met with violent protests from KCR’s TRS. But all that seems to be in the past.

Jagan and Naidu are rivals on their home turf. When Naidu entered the poll fray in Telangana as a poster boy of the Congress-led Mahagathbandhan against the ruling TRS, Jagan backed KCR, albeit clandestinely. Eventually, Mahagathbandhan bit the dust and KCR had the last laugh. On his comeback trail, the TRS leader offered a ‘return gift’ to Naidu for his role in Telangana’s elections. And, the so-called return gift obviously meant Jagan riding to power, sending Naidu packing.

“It is time for a handshake, not for crossing swords,” said KCR, known for his rhetoric, at Jagan’s oath-taking ceremony. Referring to inter-state disputes over the sharing of river waters, the TRS leader extended an olive branch to his Andhra counterpart stressing the need for mutual cooperation in harnessing the Godavari and the Krishna waters for the progress of the two states.

Strikingly, KCR had filed a batch of petitions in the Supreme Court seeking to reduce the height of the Polavaram dam under construction on the Godavari river, to avoid submergence of villages in his state. The Andhra Pradesh government asserts that the dam height be maintained at 150 ft as per the original designs to ensure flow of water by gravity into the ayacut fields. Reduction of height would only defeat the very underlying objective of the project, say Andhra irrigation experts.

Jagan seemingly avoided using the occasion to seek KCR’s help to resolve the legal hurdles in the Polavaram project, which was, in fact, the brainchild of his late father.

KCR went on making a strong case for effective utilisation of the river waters in light of his government investing heavily in lift irrigation schemes in the upper reaches of Polavaram for diversion of the Godavari.

The Andhra Pradesh government complained to the Central Water Commission, saying the construction of the Palamuru-Rangareddy lift irrigation scheme for diversion of 120 tmcft was illegal. The TRS government’s move to increase the capacity of the Kalwakurthy lift scheme from 25 to 40 tmcft is also illegal, it contended. Both the lift schemes have been proposed to exploit the Krishna water from Srisailam reservoir.

The KCR government reacted in a similar manner over the construction of the Pulichintala lift scheme by the Andhra Pradesh government on the Godavari river and several schemes coming up in the drought-affected Rayalaseema to irrigate farms with Krishna water.

K Harinath, an irrigation expert, wants Jagan not to let his bonhomie with KCR take precedence over the irrigation interests of Andhra Pradesh. Telangana’s stake over his state’s share in the surplus waters of the Krishna is unfair, the expert says. Now, KCR has built a strong case for a greater share, Harinath explains. If Telangana takes more from the surplus waters, ongoing projects such as Galeru Nagari and Handri-Neeva Sujala Sravanthi will go dry, he cautions.

But debts were distributed based on population and Andhra Pradesh, with a higher population than Telangana, received more share of debts, says analyst T Lakshminarayana. He calls for a pragmatic and fair approach to settle the disputes over sharing of assets and liabilities between the states. #KhabarLive