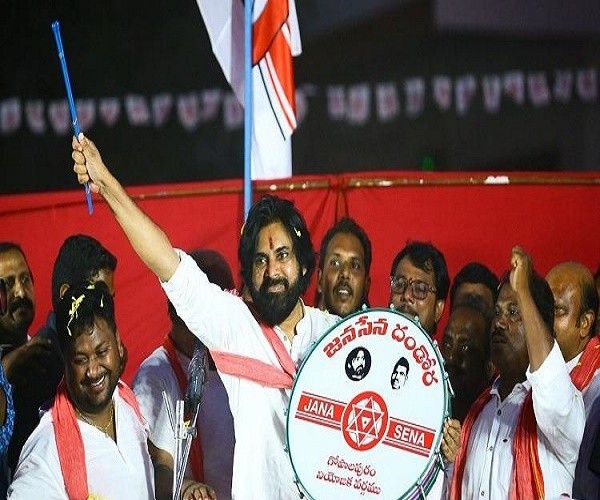 West Godavari, one of the coastal districts of Andhra Pradesh, is witnessing massive political activity since the past two weeks with the Jana Sena Party chief, actor-turned-politician Pawan Kalyan, on the second phase of his ‘Praja Porata Yatra’.

Pawan’s visit to the district, which has a large presence of the Kapu community, raises the question – will the leader contest from West Godavari? Is he intending to turn East and West Godavari into the Jana Sena’s citadel?

Pawan has also registered his voter ID from Eluru in West Godavari, which seemed to indicate that his political marathon will begin from the district. However, senior leaders in the know insist that nothing has been decided yet about where Pawan will contest from in the upcoming elections.

Kapus are one of the more politically significant communities in AP constituting a reported 27% of the total population in the state. A considerable population of Kapus are based in the two Godavari districts and are known to be able to easily swing elections towards a candidate in their favour.

In fact, one of the toughest fights that Andhra Pradesh Chief Minister N Chandrababu Naidu faced was from Kapu leader and ex-Andhra minister Mudragada Padmanabham, who hails from East Godavari’s Kirlampudi.

Mudragada had demanded that Naidu fulfil his poll promise to include the community under the BC category. In December last year, the Andhra Assembly passed a bill providing a 5% reservation quota to the Kapu community in education and public employment based on the Manjunatha Commission’s report. However, the bill has gotten stuck at the Centre as an amendment is required to Schedule 9 of the Constitution.

Pawan recently offered to be a mediator on the issue, to resolve it in an amicable manner by bringing together Mudragada and leaders of other BC organisations.

When TNM reached out to Mudragada Padmanabham to ask if there is going to be any political action from the Kapu community, he said, “We haven’t taken any decision on the political action. There are discussions happening.”

When asked if the Kapu front would support whoever wants to solve the issue, he said, “That is all still under discussion. We are yet to take a stand.”

Political pundits earlier believed that it was Pawan Kalyan who managed to pull the Kapu vote bank in 2014 to Chandrababu Naidu’s TDP, which despite backing from Pawan and the BJP only managed to capture the state with a mere 2.06% margin of the vote share. The TDP captured 15 out of 15 seats in West Godavari and 14 out of the 19 seats in East Godavari, ostensibly due to Pawan’s support, thereby proving a popular political saying in the state: “Any party that captures both Godavaris will enjoy the crown of the state.”

While Pawan continues to maintain a secular tone in his addresses, insisting that he doesn’t belong to any one community, observers say that the violent political history of coastal Andhra, especially these two districts, shows that this has always been about “establishing caste supremacy in the political domain.”

While Pawan seems to be reaching out to the Kapu community on one hand, he has also been actively working to portray himself as a politician of the people, taking up issues of the disenfranchised. He has also been attacking the ruling TDP.

His recent scathing attacks against the TDP have triggered a political uproar and his interactions with different social groups and communities, along with meetings with people affected by state government projects, have set the party’s political tone.

In fact, controversial TDP MLA Chintamaneni Prabhakar, who took objection to Pawan’s remark calling him a ‘rowdy’, challenged the Jana Sena chief to contest against him.

However, some political observers are convinced and believe that Pawan’s focus on the twin districts is to garner as much strength as he can ahead of the polls.

Juvvala Baabji, Secretary of the AP Vyavasaya Vruthidarula Union, observed that while the Kapu community is trying to show that its political presence is a deciding factor, Pawan taking up issues may become an added advantage.

He said, “Be it young or old people, all are seeing him as an agent of change. He has a strong fan base, but it is very tough to conclude if the fan base will transform into votes.”

Baabji also opined that though there are caste equations, people are rallying behind Jana Sena with the hope that Pawan will be able to solve their problems.

Another political observer and senior journalist Telakapalli Ravi believes that the conventional caste or social approach may not yield significant results. “The caste equation is always there but it can’t be a great advantage. However, the fact that he is a local voter or native could be an added advantage,” he added.

He further said, “It appears that Pawan taking up issues of the Polavaram-affected oustees or locals affected by the Tundurru aqua food park is a driving force. Unlike other political leaders, he is speaking in the language of resistance which is giving people some hope. Between caste equations and addressing the people’s issues, the latter definitely leads to stronger political establishment.”

Several other observers also believe that Pawan taking up issues in the districts of Uttarandhra, Vizianagaram, Srikakulam and Vishakhapatnam, with a solution-oriented approach rather than politicising the issue, can also fetch him additional gains in the upcoming polls. #KhabarLive