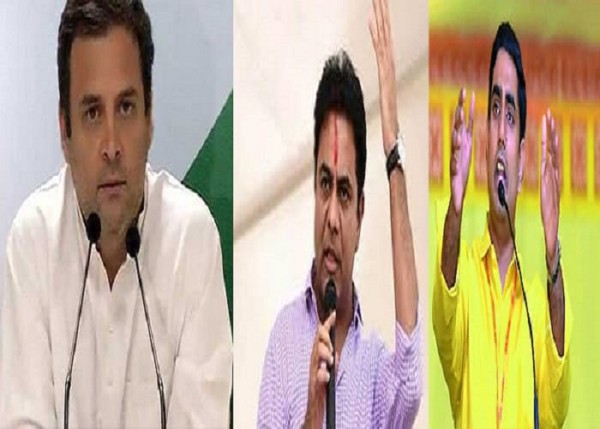 The general impression is that regional parties do not have second line leadership. But this time when the country would face general election in 2019, political scenario is going to be different.

The young leaders, whether it be the regional parties or the national parties like AICC are set to play key role. What would be interesting is to see is to what extent they can bring change in the nature of politics.

The big question is will they be in a position to usher in some new breeze into the present-day political scenario and show that they can present a progressive leadership which can take the country to new heights or will they just follow the foot steps of their fathers and continue with the legacy.

In the last four years, there has been a generational shift in the pollical scenario of India. Fresh faces are dominating the public space. Almost all the major regional parties too seem to be in the middle of transition.

Let’s start with Rahul Gandhi. Rahul Gandhi, who earned a name as Rahul Baba initially, has been making all out efforts to recast himself in a new role and wants to take on Narendra Modi in the 2019 elections. Soon after taking over as AICC president Rahul emphasised that the new Congress will be a blend of youth and experience.

The manner in which he set about his task, shows that the Congress party GenNext is ready to take charge.Rahul who was never clear in his expression had definitely undergone a metamorphic change and starting with mocking the Prime Minister with “Suit boot ki Sarkar,” he has certainly come a long way to hit headlines.

The Rafale controversy raked up by him is now taking new dimensions and at the national level it did cause some embarrassment for the Union Government and the BJP had to create a team of leaders to effectively rebut his allegations. All this, despite several goof ups by the AICC president. His biggest goof-up was giving clean-chit to the Congress in 1984 anti-Sikh riots. The way he led the party in Gujarat Assembly elections and gave tough fight to BJP was certainly a good job. The real litmus test for Rahul Gandhi would be the elections to be held in November and December this year.

If the Congress under his leadership can emerge as a major force to be reckoned with or if it succeeds to come to power in at least two or three states, Rahul would certainly emerge as a person who can lead the opposition alliance and take on the BJP during the Lok Sabha elections. The Congress as of now is confident that it would come to power in Madhya Pradesh, Chhattisgarh and Rajasthan.

If that happens, two young leaders Sachin Pilot in Rajasthan and Jyotiraditya Scindia in Madhya Pradesh stand a chance to lead the party in those states. There are indications that BJP is facing anti-incumbency factor in Chhattisgarh as well.

Tejashwi Yadav has been leading the Rashtriya Janata Dal (RJD) with reasonable success after his father Lalu Prasad Yadav had gone to jail. The RJD had won by-election in Jokihat assembly constituency in Bihar and Araria Lok Sabha constituency which has catapulted him into a position of being a real successor to his father and is now being considered as a challenger to Nitish Kumar. It is being said that he was also making efforts to give impetus to formation of a front against the BJP in 2019 elections and has been in touch with many Congress leaders as well.

With indications that the BJP graph has not been so good in Uttar Pradesh it now remains to be seen if the bicycle can help Akhilesh Yadav ride to success or not. A lot depends on with whom the Samajwadi party leader is going to ally with. The Congress led by Rahul Gandhi or BSP led by Mayawati. As of now the SP-BSP jodi seems to be going strong. This jodi had won in majority of the byelections in the recent past.

Coming down south, Dravida Munnetra Kazhagam will be led by M K Stalin, son of M Karunanidhi. Though there was power struggle in the family between Stalin and Karunanidhi’s nephew Murasoli Maran, the DMK patriarch had put an end to the controversy by declaring Stalin as his successor.

In Telangana speculations are rife that if TRS romps back to power in the elections to be held on December 7, then KTR who is the son of the care taker Chief Minister K Chandrasekhar Rao would become the Chief Minister. Insiders feel that KTR had a major role to play in finalisation of the names of 105 candidates which were announced in one go to put the opposition in dock. It is pertinent to note that KTR has emerged as the key campaigner for TRS and has also been busy in talking to leaders in other parties and attracting them towards TRS.

In the neighbouring Andhra Pradesh, the scenario is likely to be a little different. While there has been some amount of power struggle in DMK in the past things are now settled. Similarly though it is rumoured that KTR had superseded his cousin Harish Rao in playing the role of second in command, situation here too is in perfect control.

But in Andhra Pradesh the poll battle will be witnessed between three youngsters. Lokesh is emerging as the successor to Chandrababu Naidu, Y S Jaganmohan Reddy who is leading the YSRCP and has been dreaming of becoming the Chief Minister of the state for 25 years, and another new entrant into politics Pawan Kalyan.

Already a war of words is on between the three and each one of them has been hurling accusations against each other and throwing challenges. While Pawan wants to establish that Lokesh has been indulging in corrupt practices, Lokesh calls BJP as Bharatiya Jagan Pawan party and leaves no opportunity to take on Jagan.

In the western part of the country, Gujarat has seen a sudden emergence of young leader in Hardik Patel. Though he was not taken so seriously by BJP he has now emerged as a role model for the Patels in Gujarat and can pose a challenge to the BJP. In the next six months we will know whether a young dynamic team will emerge to take the country forward or not. If the young team takes the lead, then it would also be necessary for them to keep their feet on ground. Because virtual reality is different form political reality.#KhabarLive

Why This Telangana Govt School ‘Begging Funds’ To Set Up A...