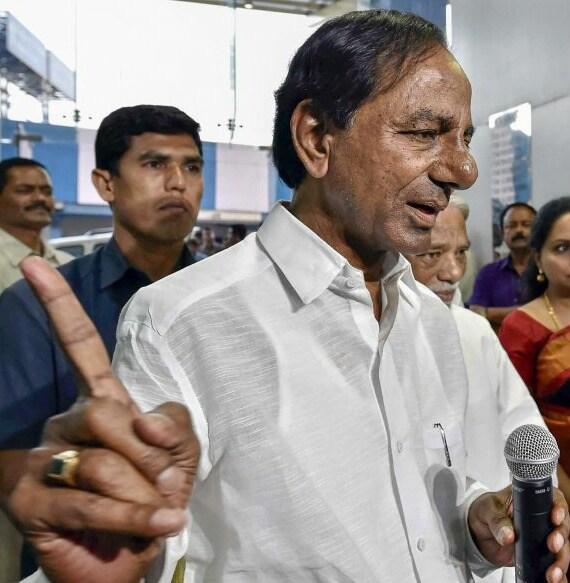 After the continuous victory in elections and now civic polls, Telangana chief minister K. Chandrasekhar Rao, who mastered the art of reading the public pulse as an architect of the statehood movement, has often taken a shrewd stance towards the NDA government.

After facing a setback in the 2019 general elections, losing some seats in his party’s stronghold of North Telangana to the BJP, Rao’s MPs voted in favour of some big policy decisions taken by the Centre. Many saw this as a strategy to arrest the BJP’s sudden spurt in Telangana.

Meanwhile, the saffron party went on the offensive, squaring up to KCR, who continues to be an unchallenged leader since the formation of the country’s youngest state. During the campaign for the urban local body elections, the BJP hoped to capitalise on the anti-incumbency sentiment. Its strategy was to polarise the electorate – which consists of a sizeable Muslim population in urban areas – around the Citizenship (Amendment) Act (CAA) and the National Population Register (NPR).

However, the results of the elections, announced on January 25, told a different story. The Telangana Rastra Samithi (TRS), led by KCR’s son and urban development minister K.T. Rama Rao, swept the polls, winning all 10 municipal corporations and 112 of the 120 municipalities. The BJP settled for only two municipalities and the Congress just four.

The victory seems to have emboldened the TRS patriarch enough to take on the BJP and is now sharpening his knife against the Narendra Modi government as he prepares to oppose the controversial CAA.

Why did KCR ‘help’ the NDA?
Previously, KCR was accused of trying to get cosy with the Modi government at the Centre for two reasons: Fearing a threat from the Congress, which remained the principal opposition in his state; and hoping a special relationship with the NDA would provide him with Central funds for infrastructure projects and welfare schemes.

Even after the NDA was reelected, Rao’s TRS backed almost all major policy decisions of the NDA government, including the dilution of Article 370 and the bifurcation of Jammu and Kashmir, the triple talaq Bill and the recommendations of the Fifteenth Finance Commission. These pro-NDA overtures fetched Rao the moniker of ‘Narendra Modi’s invisible friend’.

He has lied low all these days, gauging the public mood after the saffron party’s rise in the national elections also reflected in his state. But, to KCR’s exhilaration, the results of the urban body elections did not tally with the BJP’s performance in the general elections. The BJP’s vote share declined from 20% in the Lok Sabha elections to 14.9%. That it managed to win just two urban bodies shows it still has a long way to go before it can challenge KCR’s authority.

Understandably, the Telangana chief minister thinks it is the right time to take the BJP head on. He will perhaps revisit his pitch for a third alternative at the national level, with regional parties in the driver’s seat. By championing the cause of minorities in the backdrop of the protests against the NPR-NRC-CAA, Rao sees it as an ideal time to build relationships. His party has opposed the Citizenship (Amendment) Bill in parliament, which will also give him some clout.

After the municipal election results were announced, Chandrasekhar Rao told the media he would like to unite the chief ministers of the different state governments which are opposing the NPR-NRC-CAA. The Telangana CM said he would invite his counterparts to a conclave to discuss these controversial policies.

KCR also announced that his government will not implement the NPR and NRC in Telangana. With this, the state is set to join the league of states resisting these NRC and NPR.

Among the states which are opposing the CAA-NPR-NRC are Kerala, headed by the Left Democratic Front, and Punjab and Rajasthan, under the Congress. West Bengal, led by Trinamool Congress. All have adopted a resolution against the implementation of NRC-CAA. The chief ministers of Andhra Pradesh (Y.S. Jaganmohan Reddy), Odisha (Navin Patnaik) and Bihar (Nitish Kumar), after their parties supported the Bill in parliament, have expressed their opposition to implementing the CAA in their states.

Observers say that the TRS, by leading the charge against the NRC-CAA, sees the possibility of gaining electorally both at the state and national levels. At the state-level, the party will try to woo the state’s Muslim community. This was indicated when KCR said that more than 20 lakh Muslims from Telangana have been living in Gulf countries, doing menial jobs and that the BJP’s divisive politics would harm their interests.

The party is also banking on the growing opposition to the NRC-CAA from different state governments and would like to have a greater role in national politics, a senior leader from the TRS, wishing to be anonymous, told #KhabarLive.

Signs of realignment?
With more than four years to go for the next national election, the proposed anti-NRC-CAA conclave will give KCR ample time to build coalitions and strong relationships with opposition parties. It may be recollected that he floated the idea of a ‘federal front’ comprising of regional parties, which did not take off.

Now, KCR is expected to send out signals for a fresh political realignment, according to analyst and All India Majlis-e-Ittehadul Muslimeen (AIMIM) MLC Syed Amin Jafri told The Wire. That the BJP’s graph registered a downswing in the state elections – with losses in Jharkhand and Maharashtra – seemingly gave an impetus to the TRS leader to become a rallying point for the opposition parties.

The conclave has got the prospect of drawing the participation of chief ministers of government’s ruled the Congress, NDA partners Janata Dal (United), ‘equidistant’ Biju Janata Dal and vocal critics of Modi such as TMC and CPI(M). Jafri said this would help the TRS establish contacts with parties across the political spectrum.

Chandrasekhar Rao, at the media conference, took potshots at the Modi government for the decrease in economic growth. This has seen Telangana’s growth and tax revenues plummet to 9% in the first half of the current year, compared to 22% in the corresponding period last year. This is viewed as a pointer to why KCR is revisiting the Federal Front idea to seek the states’ pound of flesh from the Centre and addressing the widening Centre-states gulf under the Modi 2.0 government.

But the BJP offers a different take on KCR’s changing stance. Raka Sudhakar Rao from the BJP’s ideological parent organisation – Rashtriya Swayam Sevak Sangh – said the moves do not reflect a defiant posture but that KCR is scared by the BJP’s increasing electoral base. In the 2018 state elections, the saffron party’s vote share was just 7%. This increased to 20% in the general elections and 14.9% in the election for the local bodies. “The BJP also finished second in more than 60% of the seats in urban local bodies. This has left KCR feeling jittery,” Sudhakar Rao reasoned.

He also speculated that KCR’s plan of holding a conclave against the NRC-CAA will not be a success. “The Congress will not trust him and the allies of the NDA who have opposed the policies are unlikely to join hands with him,” the RSS leader claimed. #KhabarLive

Will AIMIM Supremo ‘Asaduddin Owaisi’ Be The Telangana’s ‘King Maker’?