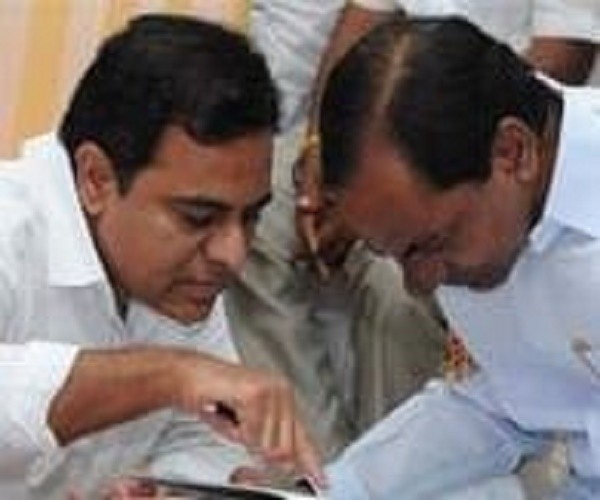 This is a million dollar question. TRS party is undergoing heavy confrontations and deliberations over this question. And internal squabbles, groupism, conflicts, anti-betrayal activities are in boom on elections and next successir of KCR in TRS.

With the Telangana Chief Minister K Chandrasekhar Rao all set to plunge into national politics after this assembly elections as a part of state reorganuzation and start his nation wide tour to meet the leaders of other regional parties, speculation was rife that his son and a senior State Minister K Taraka Rama Rao would succeed him as the next Chief Minister of Telangana.

KCR was grooming his only son as heir to the throne from the beginning and kept enlarging his role both in the Telangana Rashtra Samiti and the State Government. Apart from shouldering the responsibility as the party general secretary, Rama Rao is the second most important Minister by the number of portfolios he holds. His high profile portfolios include industries, municipal administration and information technology among others. Under the tutelage of his father KTR has already proved his mettle both as a politician and administrator and also earned laurel at the international level.

The first step in the succession plan will be elevating KTR, as the son is known, will be his anointment as the party working president in the next plenary in April, the party sources said. Rama Rao will be given the responsibility of leading the party in the next elections in the State level as KCR will be busy with the larger national role of bringing the anti BJP , anti Congress regional parties to build a Third Front or the Federal Front. The party sources said that KCR will not be contesting lok Sabha elections and will not be a candidate for the State assembly seat.

“KTR will surely be the Chief Ministerial face of the party in this elections”, a senior party leader confided. Accordingly he will also have the final word in the choice of the party candidates.

However the succession plan will not be its own share of hiccups, specially from KTR’s contemporary and a close relative T Harish Rao.

Harish Rao is the son of KCR’s sister and has quite a formidable position in the party and the Government. He has also earned a name and a fan following in the party as he stood shoulder to shoulder with his uncle during the ups and downs of Telangana movement and holds the key portfolio of Irrigation in the State cabinet. While KTR has an suave image as an English Speaking and urban face, Harish Rao was an out and out rural face of the party and a hard working person.

While Harish Rao was nursing his own ambition, the majority of TRS leaders and KCR himself were clearly inclined towards Taraka Rama Rao as his successor.

Another power centre in the part K Kavitha, daughter of KCR will continue to represent the party in the Parliament. Party sources said that she will be renominated from Nizamabad lok Sabha constituency and was largely expected to win the seat and help her father in the post election scenario.#KhabarLive

Why ‘No Women’ Again In KCR’s 10-Member ‘New Cabinet’ In Telangana?