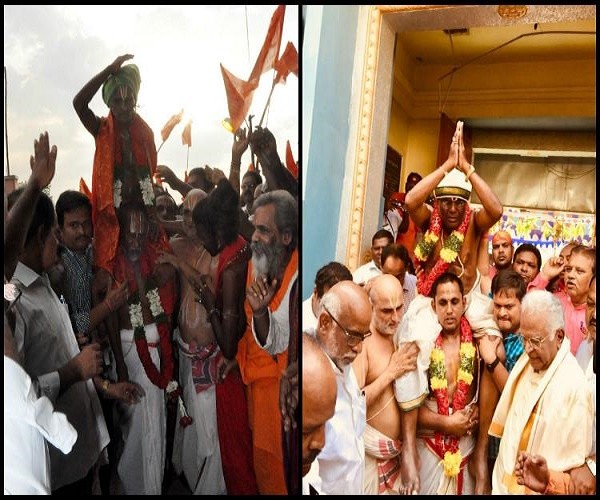 The 2,700-yr-old ritual involves carrying a Dalit devotee on the shoulders into a temple and was recently performed by a Brahmin priest at the Talpagiri Sri Ranganatha Swamy temple in Nellore.

In what is being hailed as a move to strengthen unity among Hindus, a Brahmin priest at the Talpagiri Sri Ranganatha Swamy temple in Nellore carried a Dalit devotee on his shoulders inside the temple.

The ritual, ‘Muni Vahana Seva’, is said to have been performed first in Tamil Nadu 2,700 years back. It is said that a Vaishnava priest Loka Saranga carried a Dalit youth into Sri Ranganatha temple at Sri Rangam.

While the Muni Vahana Seva is being hailed, many Dalit intellectuals say that it will not bring about any change and will not liberate Dalits from the clutches of caste discrimination.

ALSO READ:  Most Important Fashion Tip For Your Winter Wedding

CS Ranga Rajan, Chairman of Temple Protection Committee, who is spearheading the movement to reenact the ancient ritual, told Khabar Live, “The basic idea is that our Sanatan Dharma has an internal reformation system. No outsider can reform it, no legislation or constitution can guarantee the rights of the downtrodden. It is only a change in the mindset of the people which will help, this is what Ambedkar said.”

On the argument by activists and academics that these kind of rituals do not change the situation of Dalits on the ground, he said, “these activists are trying to fight, I’m trying to love, we want to achieve it through affection and love.”

While stating that Muni Vahana Seva is a powerful weapon to bring about social change, he said, “Nothing will satisfy the academics and activists”.

Samajika Samarasata Vedika, a social organisation which advocates social harmony among Hindus and temple entry to Dalits is also backing the initiative. Speaking to Khabar Live, its representative Dr Vamshi Tilak called it “a step towards equality among Hindus”.

When Khabar Live asked if this initiative brings change in the lives of the Dalits outcasts, he said “the transformation will happen, this is to signify we are all one and to eradicate the discrimination against Dalits”.

Dalit activists feel that growing consciousness among Dalits against the historical discrimination by caste Hindus and its (Hindu religion) existential crisis has triggered panic among the “guardians of Hinduism”. The caste Hindus are now trying to use this ritual to protect their religion and dominance over Dalits and the downtrodden, in the name of reformism.

Dr Sudarshan Balaboyina, an activist and Dalit-Bahujan writer tells Khabar Live, “These are mere acts which are being done for fear of its (Hinduism) destruction and not for its equality”.

ALSO READ:  What Are Alternative Options Open For Chandrababu Naidu?

He further said that Hinduism never had a reformist feature. While stating that the upholding of Ambedkerite principles can only help the Dalits, he said “Like Dr BR Ambedkar said annihilation of caste is the only way to reject Hinduism and its scriptures, embracing a life where there is equality and liberty can only emancipate them”.

Noted activist, writer and Bahujana Rachayitala Sangam National Coordinator Dr Jilukara Srinivas wondered if the Muni Vahana Seva was being performed from 2,700 years ago, then why hasn’t the change taken place in the system yet.

“No change will happen by carrying someone on the shoulders. There was no change then and even now, there will be no change,” he said.

Calling the initiative a counter outcome of the Dalit-Bahujan movement on Telugu land, he said, “Countering the Ambedkarite movement is the only motto of this. One can’t strive for equality and integration by keeping the compartmental caste and Varna system alive”. #KhabarLive