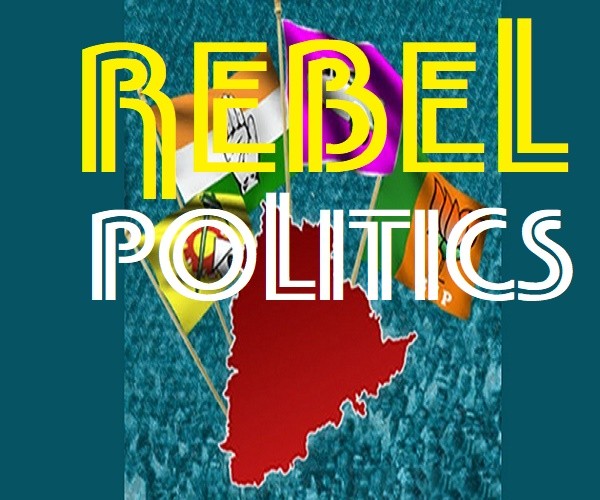 The ruling Telangana Rashtra Samithi as well as the opposition grand alliance, led by the Congress, are facing trouble from candidates not getting the party tickets or shifted to different constituencies in the Telangana assembly election.

Creating a headache for all major parties in Telangana, disappointed aspirants are jumping into the fray as rebel candidates or switching over to a different outfit to get a ticket for the December 7 assembly elections.

The aspirants including people representatives and their kin, who sought tickets from the national party Congress and got bitter results after the announcement of Mahakutami’s list of candidates, are now preparing for their candidature as rebels in the Telangana assembly polls. Even the ruling party TRS is also facing such leaders but, it is seemed to more damage to the Congress.

Few congress leaders had already launched election campaign before the announcement of the list of candidates and now continuing their campaign as rebels and had submitted their nominations including affidavits to the respective Election Returning Officers. The leaders having good cadre are seeking tickets from other parties like Bahujana Left Front (BLF), Bahujana Samaj Party (BSP) and the ruling party in central BJP. Political experts are saying that these circumstances may lead to the defeat of strong candidates from either Congress or TRS.

ALSO READ:  The 'Picturesque And Wonderful Waterfalls' In Telangana State

On the other hand, in TDP, Bandru Shobha Rani (Aleir) is contesting as rebel and from newly formed TJS, Kalluri Ramachandra Reddy (Aleir) are contesting as independents. In TRS, Korukanti Chander (Ramagundem), Kottha Manohar Reddy (Maheswaram) and Venepally Venkateswara Rao (Munugodu) are in the poll-fight as rebels.

Meanwhile, several OBC leaders from the Congress held a meeting to protested against the “injustice” meted out to them in the distribution of party tickets. Ranga Reddy district Congress committee president Kyama Mallesh, who aspired to contest from Khairatabad constituency in Hyderabad, alleged that the Congress bigwigs had demanded Rs 3 crore for allotting him a ticket.

The party has fielded state spokesman Dasoju Sravan from Khairatabad and Mallesh now announced that he would file nomination as an independent.

Former MLA from Serilingampalli, Bhikshpathi Yadav, also announced that he would contest as an independent, alleging that there was no place for OBCs in the Congress. Similar allegations were levelled by former Osmania University student leader Rajaram Yadav.

R Krishnaiah, national president of OBC associations, called for a Telangana bandh on Saturday to protest the injustice done to the OBCs in the Congress. He alleged that in the name of the grand alliance, the Congress was cheating the people.

Senior Telugu Desam Party (TDP) leader Sama Ranga Reddy has a different problem. He alleged that LB Nagar constituency, which he had been nurturing for several years, was given to Congress while he was allotted Ibrahimpatnam constituency under the grand alliance. The TDP leader went to Amaravati to bring pressure on party president N Chandrababu Naidu to change his constituency, otherwise he would contest as an independent in LB Nagar from where Congress has fielded its former MLA D Sudhir Reddy.

The ruling Telangana Rashtra Samithi, too, has not been immune to dissidence. Its sitting MLA from Choppadandi Bodige Shobha, who was denied re-nomination, resigned and joined the Bharatiya Janata Party which gave her the ticket from the same constituency.

On the other hand, Telangana Inti Party president Cheruku Sudhakar, who was originally allotted one seat in Maha Kootami, revolted against the Congress after he came to know that the allotted seat was withdrawn. He announced that he would contest against Congress state chief Uttam Kumar Reddy in Huzurnagar constituency. #KhabarLive

It’s Time For Telangana Farmers To Get Their Dues

Will ‘Telangana State Road Transport Corporation’ Be Merged With Govt?

Beware! Don’t Use ‘Cheap Fire Extinguishers’ For Vehicles Can Lead To...