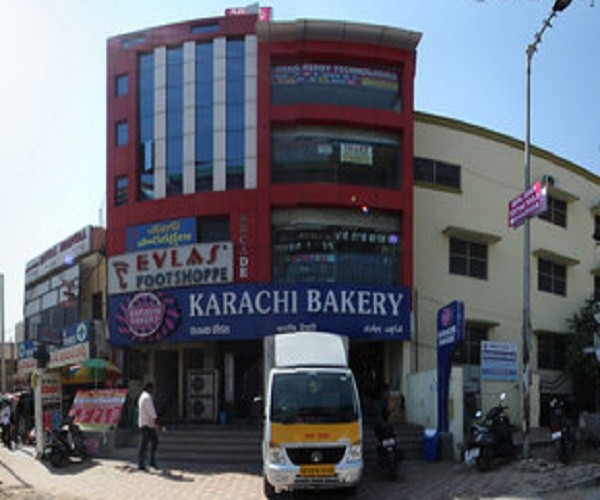 Hyderabad’s iconic Karachi bakery at Ameerpet has come under the scanner of the civic body officials following a complaint from a customer. The premises of the bakery was raided on Tuesday after a customer complained of finding worms in sweets purchased from the bakery. The customer took to Twitter to post pictures of the spoilt sweets.

As the tweet went viral, Greater Hyderabad Municipal Corporation (GHMC) West Zone Commissioner Hari Chandana took cognisance of the matter and ordered its authorities to raid the premises. Talking to #KhabarLive, Deepak Pinto, who found the contaminated batch of sweets, told #KhabarLive that the confectionaries were a gift from friends.

“The sweets were well within the expiry date. My wife first noticed a white powdered substance on the sweets. We couldn’t really decide if the sweets were contaminated or not. In the second piece she took, there were worms wriggling out of it. We found worms in two more sweets and the remaining had a white powdered substance on top of it,” Deepak said.

Deepak’s friend Donita took to Twitter and posted the pictures of the contaminated sweets.

Happy wormy Diwali from @KarachiBakery
Found these worms in at least 4 chocolate pieces. They even move… Not sure how many batches are even impacted by this 😞@GHMCOnline pic.twitter.com/nwK7So1Z8y

GHMC Commissioner Hari Chandana immediately responded to the tweet and ordered the food safety officials of the civic body to raid the premises of the bakery.

Happy wormy Diwali from @KarachiBakery
Found these worms in at least 4 chocolate pieces. They even move… Not sure how many batches are even impacted by this @GHMCOnline pic.twitter.com/nwK7So1Z8y

Hari Chandana also confirmed to #KhabarLive that the contaminated consignment has been confiscated and a fine of Rs 25,000 has been levied on the bakery owners for violating safety norms.

Karachi is one of the iconic eateries in Hyderabad and boasts of a history of 65 years. It is for the first time in the recent history that the bakery has been raided. In 2014, an outlet of the bakery at Banjara Hills was sealed for allegedly violating food hygiene norms and not maintaining the standards stipulated by the municipal body.

Just over two months ago, Swedish giant IKEA in Hyderabad was raided after a customer complained of finding a caterpillar in the biryani served at its restaurant. IKEA was levied a fine of Rs 11,500. The restaurant manager and Haldirams, the vegetable biryani vendor at Nagpur, from where the restaurant procures its food, were each issued a notice. #KhabarLive