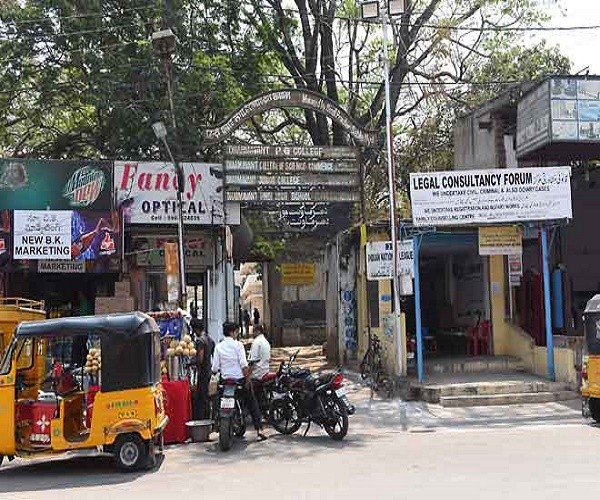 At one point of time, Yakutpura played a crucial role in protecting the city from enemy attacks. Like many localities of the city, Yakutpura is counted among the oldest areas which have existed since Qutb Shahi times. The Yakutpura Darwaza was part of the city wall and one of the 12 gates, close to the Mataki khidki.

The city walls were constructed on the instruction of Aurangzeb’s general, Mubariz Khan who left him in charge of the Deccan after the defeat and destruction of Golkonda and Hyderabad. Mubariz was ousted midway by Qamaruddin Khan Asafjah, who then established the Asafjahi dynasty, after being awarded the title Nizam-ul-Mulk.

Yakutpura is possibly named after a courtier, Yakut, who was at the Qutb Shahi court when Hyderabad was built in 1591 AD. He is said to have built a palace for himself here.

Nawab Iftekaar Shahab Jung ki Deodhi was located here, and some remnant walls can still be seen. Opposite this was the blue-coloured haveli of Sharfuddin Khan, and close by was the fifth Nizam’s brother, Roshan Uddaula’s haveli. The latter had two minar like structures on its sides, and the gateway was an imposing one with a Nubatkhana on top along with three Sahiyadris (doors). The seventh Nizam’s father-in-law, Nawab Mir Jahangir Jung lived here, followed by his son Nawab Qudrat Nawaz Jung. Till some years ago, Suraj Talkies existed in one part of this haveli.

Ahead was the two-storied haveli of Lala Laita Preshad who was the manager of Salar Jung’s estates. The gateway to this haveli was very attractive and there used to be three wooden kamans in this haveli.

Rai Bala Preshad had his deodhi here, along with the deodhi in Punjagutta, which houses the NIMS hospital today. He was the first-ever engineer from a Kayastha family and was sent to London by the Nizam for his education. He also set up a telephone system at the Punjagutta deodhi upon his return which impressed the Nizam, who got the systems installed at the King Koti, Falaknuma, Kotwal office, and all minister residences. The Nizam later bought this Punjagutta deodhi and had the NIMS hospital constructed here.

Further away from this, is the western style haveli of Nizam Ikram Jung. The lane adjacent to this was known as Shadi Lal ki Gali. Further ahead is the Darabganj Gali, which houses a deodhi of the same name. Ahead to the Yakutpura Darwaza, is the Dharmavant School built by the Dharm Karan family in 1879 AD which is a college today.

From the Yakutpura Darwaza, the Kamalposh Gali leads to Alijah Kotla. Close to the Darwaza are many shops that manufacture the special thread used to fly kites (maanja).

Close to this area is Ganganagar, a six-acre area of land which was donated by Jaiswal Ganga Prasad Aminha. About 100 families live here today.

Other areas here are Brahminwadi and Madannapet – the latter established by Qutb Shahi prime minister Madanna. Yakutpura also has a railway station. #KhabarLive