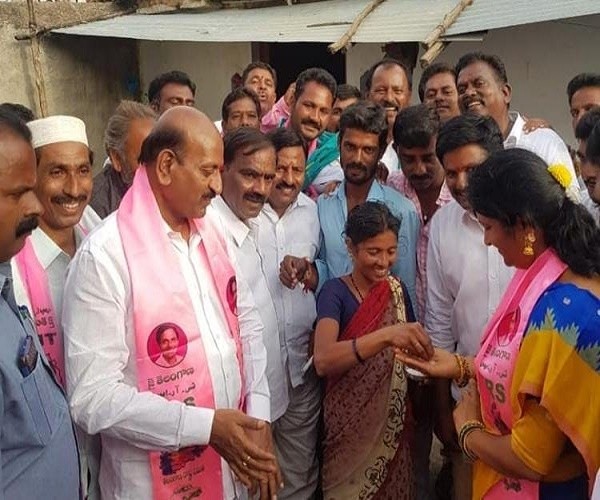 In a blatant violation of election rules, sitting MLA from Yellareddy, belonging to the Telangana Rashtra Samithi Party, E Ravinder Reddy has been caught on camera promising voters Rs 5 lakh if he is elected to the Assembly, unopposed. In the video, which has gone viral, Ravinder Reddy can be seen telling a group of villagers to form 50 units, conduct meetings and find ways to elect him unopposed.

He then promises to give them Rs 5 lakh, even as voters complain that Rs 5 lakh is not enough. This is the third poll code violation by the TRS to be caught on camera.

Three days ago, a video of caretaking Transport Minister P Mahender Reddy surfaced in which a group of Muslim men could be seen pledging their support to him in a mosque. Similarly, TRS candidate from Armoor, A Jeevan Reddy, made devotees at a Ganesh pandal promise their support to him by taking oath in front of the deity.

ALSO READ:  Constancy Of 'TRS Populist' Schemes A 'Plus Point' For KCR Govt In Elections

Subsequently, the Telangana Congress registered a complaint with the State Election Commission. However, it seems that the Commission has not taken a serious view of the situation as the Model Code of Conduct was yet to be implemented then.

“There were some newspaper reports and complaints too. Since the Model Code of Conduct is not on, if a voter takes oath, I don’t think it falls within the purview of electoral code violation. But we have asked the district electoral officer concerned to give a report on that,” state Chief Election Officer Rajat Kumar told #KhabarLive.

It now remains to be seen if Ravinder Reddy will be booked by the Election Commission as the Model Code of Conduct has come into force since Thursday.

The National Election Commission on Thursday said that the MCC would be implemented in all the states and Union Territories immediately after the Cabinet is dissolved.

Is Congress Leader Revanth Reddy Prepared To Go To Jail?

Why Major Political Parties In Telangana Still Not Serious’ On ‘Women...