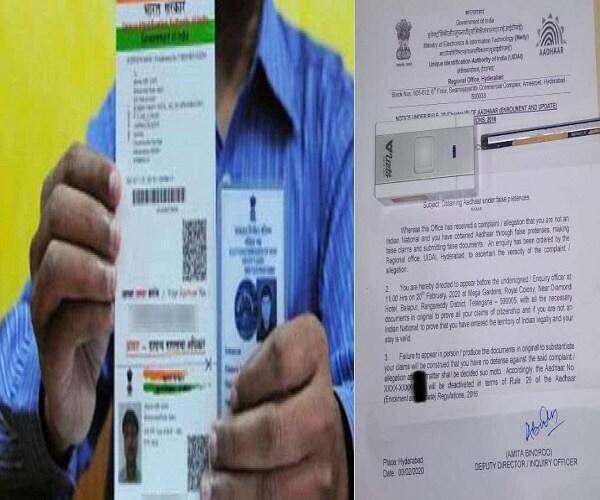 In a surprise move, the Aadhaar authority-UIDAI slapped hindered of scariest notices to Hyderabadis mentioning their Aadhar card is invalid due to false pretences, false claims and fake documents. This notices sent to many in old city areas created panic among Aadhaar holders. Many visited their lawyers, some approached police, some inquired the details with media houses. The panic-striken situation makes common man a sleepless nights.

On February 3 UIDAI sent a letter to Sattar Khan, a resident of Hyderabad raising questions on whether he was an Indian citizen. The Unique Identification Authority of India (UIDAI) that oversees the functioning of Aadhaar in the country in a letter to Sattar claimed to have had received a complaint/allegation that he was not an Indian National, the letter did not specify who made the complaint. UIDAI alleged that according to the complaint Sattar had obtained the Aadhaar card through false pretences, making false claims and submitting false documents.

The UIDAI has asked Sattar to present himself before an enquiry officer at 11 am on February 20 at Balapur in Rangareddy district. He has been asked to provide necessary original documents to prove his Indian citizenship. If he is not an Indian National, he is to prove that he entered the country legally, the notice says. And if he failed to show up, the UIDAI would take a decision suo moto, the notice warns.

Its unclear how many such letters have been issued by the UIDAI so far. Muzaferullah Khan, Sattar’s advocate reasons that since UIDAI has orgainsed the inquiry at a function hall, there could be many more people turning up. “They have booked a function hall for the probe, it could mean there could be a lot of people who they have sent letters to,”he said. The lawyer intends to challenge the UIDAI in the Telangana High Court, questioning the authority of UIDAI to summon Indian citizens and question their citizenship.

“Sattar Khan is over 40 years old and has lived in two areas of Hyderabad for most part of his adult life. His family and siblings are all residents of Hyderabad and have their ration cards and voter ID cards. This person is 100% Indian, his father worked with a state-owned Public Sector Undertaking (PSU) and his mother is a pensioner”, insists his lawyer.

“It is clearly mentioned in the Aadhaar card that Aadhaar is not proof of citizenship. If such is the case then how can a person in possession of a fake Aadhaar card be declared not a citizen of the country?” asks Khan.

The UIDAI in its letter has not specified what all documents are to be presented to prove one’s citizenship to them, “My client will present himself before the UIDAI on February 20 but then we will take UIDAI to court. UIDAI has to give clarity on what authority they are asking questions about my client’s nationality. They have not specified under what sections of law they are asking my client to prove his identity and have only mentioned the clause under which they can deactivate it,” he added.

The UIDAI has also not mentioned the source of complaint, nor attached the complaint copy. Similar letters from UIDAI have also reportedly been issued in Karnataka, the workings of the Hyderabad regional office of the UIDAI is presently handled by its regional office in Bengaluru.

#KhabarLive reached out to the office of Amita Bindroo, the Deputy Director/ inquiry officer and the office of the Director-General regional office Hyderabad and Bengaluru for a comment, but did not receive any response.

Srinivas Kodali an independent researcher on Open Data and Aadhaar told #KhabarLive that UIDAI has no authority to question the citizenship status of any individual. “This is the job of the Ministry of Home Affairs. This incident clearly shows UIDAI had several issues in its enrollment process which was privatised. If anyone needs to be enquired into it is the UIDAI and it’s secret functioning. They are not accountable to the citizens anymore and behave like they are digital gods who control us,” he said. #KhabarLive

Many Hospitals In Hyderabad Operating ‘Without Authorisation’ Under Biomedical Waste Guidelines