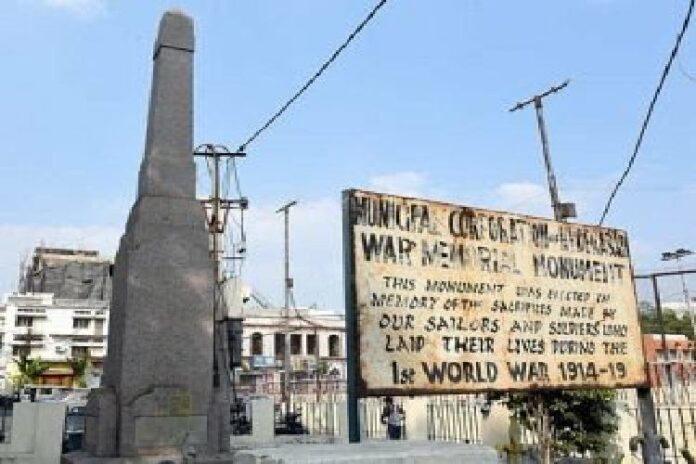 Standing 30 foot tall, the pylon now has a thick blanket of dust and mud, the surroundings being in even more deplorable condition as it was called ‘War Memorial’ which is in sheer neglect by authorities at Chaderghat Bridge near Victory Playground at Malalpet in Hyderabad.

This is a memorial that no one remembers. This memorial, adjacent to the Victory playground in Chaderghat, stands as a monument of irony in more than one way. One, because this is the 100th year after the World War I, after which the memorial was built as a tribute to Indian soldiers who fought and became martyrs in the War, and then, because, for the last several years, despite several media reports on the pathetic condition of the memorial, authorities have conveniently forgot it.

Just off Victory playground in Old City’s Chaderghat area, sitting on one side of a busy road, is an ancient memorial that lost its relevance in the chaos of life around it.

Concealed in a thick layer of dust, the monument installed to pay tribute to soldiers who fought in the First World War, has been choked by a maze of electric wires that supply power to the residential areas located behind a playground.

One has to look closely to read the fading inscription – ‘Lest we forget’ — on the front of the obelisk or abreast oneself with the information that the memorial was financed by businessmen of Residency Bazaar. The names of the donors, etched on it, peek out from under the layers of dust covering it.

‘This monument was erected in memory of the sacrifices made by our sailors and soldiers who laid down their lives during the 1st world war 1914-19’ — reads the sign put up by Greater Hyderabad Municipal Corporation (GHMC) near it.

“The war memorial was erected in reverence of soldiers who laid down their lives during an epic war. But it seems like no one really values their contribution anymore. There is a gate, which is locked most of the time. You can see children making graffiti on its pillar and also jumping inside the fence to play.” said Jitender Hari, a professor from JNTU who lives in Chaderghat.

Clearly, this glorious piece of history has lost its sheen now.

“No one even remembers that this monument was erected at Chaderghat. The plight of the monument is proof enough to establish the official apathy towards the citys heritage,” said P Anuradha Reddy, a city-based heritage expert and convener of INTACH-Hyderabad.

When asked about the gross neglect, GHMC officials said that it is difficult to keep it clean at all times as it is located in a busy area. “The war memorial is monitored regularly but because of all the dust and vehicular pollution in the area, it looks like it is not being maintained well,” said K Suresh Kumar, chief engineer, GHMC said.

It was on November 11, 1918, that World War I came to an end with Germany being forced to seek an armistice. And on Sunday, as the day marks the centenary of the memory, people around have forgotten what it was erected for. The inscriptions on the pylon too have faded away. One needs to strain the eye to understand what the inscription says: “This monument was erected by the inhabitants of the Residency Bazaars, Hyderabad in grateful memory of our sailors and soldiers who gave their lives in the great war 1914-1918 and of the peace which crowned the sacrifices of Great Britain in the cause of freedom and righteous”.

Standing 30 foot tall, the pylon now has a thick blanket of dust and mud, the surroundings being in even more deplorable condition.

There are people who relieve themselves near the pylon, not to forget those who dump leftover food and garbage all around it. The sickening stench near the pylon tops it all. Heritage lovers point out that no efforts are on to restore the pylon to its golden days when there used to be meetings near it, and VIPs or Armymen visiting it.

City-based historian Anuradha Reddy says the situation of the pylon shows that there is no value for the soldiers who sacrificed their lives during the War. “I recently visited the place. The stench and the condition of the surroundings have made it an eyesore,” she says.

According to records, Allenby said: “I take this opportunity to express my appreciation of the valuable services and high soldierly qualities of the following contingents of Indian Imperial Service Troops which, through the generosity of their respective ruling chiefs, were placed at my disposal: Hyderabad Lancers, Jodhpur Lancers, Kathiawar Signal Troop and Mysore Lancers.”

The 15th Imperial Service Cavalry Brigade, which consisted of lancers from Hyderabad, Mysore and Jodhpur was involved in defending the Suez Canal in Egypt and was also victorious over the Turkish army in Palestine. It is said that more than 80 people died during the war. But they have been forgotten, especially in Hyderabad. #KhabarLive #hydnews