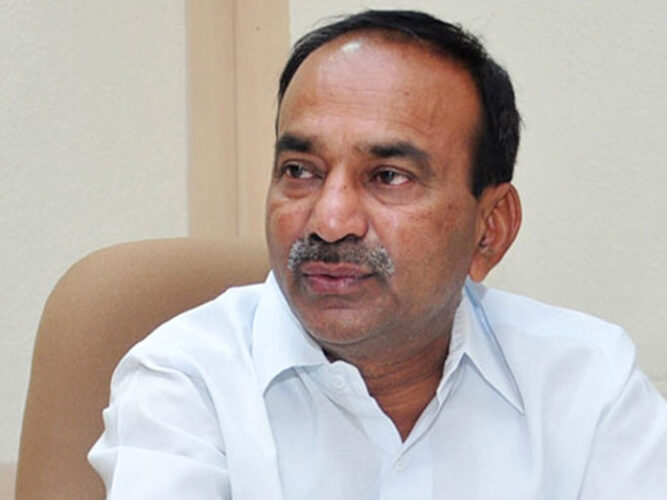 The land grabbing allegations on Telangana health minister Etela Rajender is now the hot topic and trending as talk of the town.

The first finance minister of the state and once the blue eyed boy of TRS chief K Chandrasekhar Rao is now in trouble.

He is almost at the exit gate of the State Council of Ministers and may tender his resignation any time on any day.

But the big question now being asked across the state is who is behind this episode that led this Telangana Udyamakarudu?

Interestingly, all fingers are pointing at T Harish Rao as the man behind the episode that is said to be aimed at sending away Etala from the state cabinet.

While Etala was the first finance minister of the new state, Harish Rao succeeded him in the second term.

Sources say that Harish Rao had masterminded the controversy and was the man behind the news flashing on the electronic media.

Harish Rao, as per sources, has been planning to drive away all KCR’s supporters and thus isolate the family within the TRS.

By driving away all those who have been backbone of KCR will isolate or weaken KTR in the party.

This would help Harish Rao in succession after KCR as the weak KTR will have less chances of succession.

But the big question is will KCR and KTR allow this to happen? Will they accept whatever Harish Rao does these days as that would weaken the Kalvakuntla family?

It is learned that the state governor Tamilisai Soundararajan also approved the transfer of the medical, health and family welfare portfolio from the Eatala Rajender to the Chief Minister.

Investigations confirmed encroachment of assigned lands: Medak district collector Preliminary investigations revealed that the assigned lands of the farmers in Hakimpet and Achampalli villages have been grabbed, said Medak district collector. He added that a detailed report will be submitted soon after a comprehensive survey. The survey of lands are being conducted on the behalf of Toopran RDO Ram Prakash. Six teams have been formed to conduct the digital survey at Eatala’s hatcheries and surrounding assigned lands. #KhabarLive #hydnews