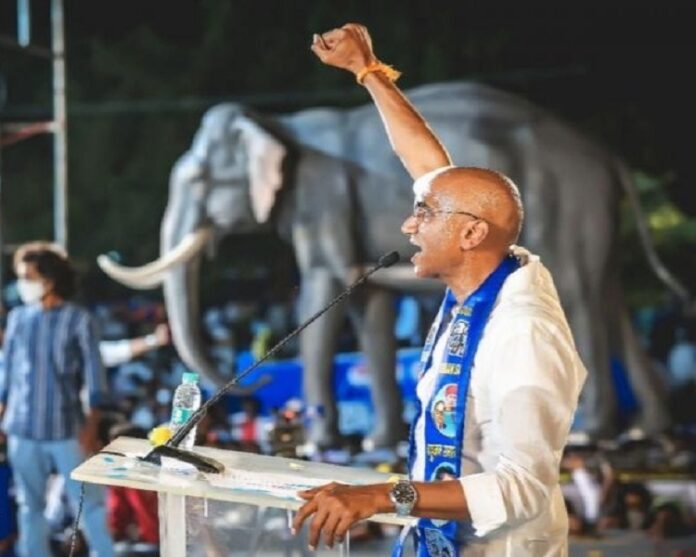 59 / 100
Powered by Rank Math SEO
The retired IPS officer Dr R S Praveen Kumar recently joined the Bahujan Samaj Party at a huge rally held at Nalgonda and vowed to bring Bahujan Rajyam (rule of the downtrodden) and a drastic change in  Telangana politics.
Praveen Kumar’s massive show of strength was promptly highlighted in the media. Especially, the Telugu media gave him a massive coverage on the front page with the headline quoting him that he would go to Pragathi Bhavan on an elephant (election symbol of BSP) after the next elections.
Having gained tremendous influence among the Dalits due to his Swaero Movement in the last nine years, Praveen Kumar will definitely be a threat to the mainstream parties – the Telangana Rashtra Samithi, the Congress and the BJP in the next elections.

However, it all depends on his future strategies.

The retired IPS officer’s entry into active politics in Telangana has triggered a debate in the media circles as to which party would be the most affected by the BSP.

What is needed for a person who sets a goal for himself to reach his own community people first and then expand his base among other sections of people? Is it mass base or intellectual attainments in the crucial subjects of equality and social justice?

Is there any scope for a political novice to influence the electorate without depending on money and muscle power in the present electoral scenario?  These are some of the crucial questions that are at the back of the minds of different sections of people, be it elite and marginalized, following the plunge of former IPS officer R.S. Praveen Kumar on the political firmament of Telangana State.

His joining the Bahujan Samaj Party (BSP), headed by former UP Chief Minister Mayawati, has raised many eyebrows as this former civil servant has begun sailing with a party with Dalit base and ideology.

Of course, Praveen has been working for the development of students from marginalized sections of society. He has always preferred to work for the students of Residential Educational Institutions Society of Social Welfare Department rather than wearing police uniform and that too on his personal request to the Chief Ministers of successive governments, right from the days of the combined state of Andhra Pradesh.

Hailing from the backward Mahabubnagar district, Praveen entered IPS and devoted himself to the service of students who come from disadvantaged sections and successfully made them pursue their higher studies in prestigious and reputed educational institutional institutions across the country.  So, strong feelings of gratitude developed in the minds of lakhs of students(fondly called ‘swaeros’ – combination of ‘sw’ for social welfare and the word ‘aero’ from the Greek word for the sky).

His inaugural address at Nalgonda town on the occasion of his joining BSP is considered to be a throwback to NTR’s 1985 rally in the same town from where NTR contested the Assembly elections for the first time, apart from two seats viz. Gudivada (Krishna district) and Hindupur (Anantapur district).

The overwhelming response that Praveen Kumar got in his first ever address in Nalgonda suggests that he has a smooth ride ahead when it comes to his further political moves.

According to an analyst, Praveen Kumar might eat into the vote banks of all the three major parties and the TRS would have to face the biggest brunt.

Interestingly, there is also a discussion on the impact of Praveen Kumar on the prospects of YSR Telangana Party (YSRTP), a new regional party launched by Y S Sharmila, daughter of former chief minister of combined Andhra Pradesh Dr Y S Rajasekhar Reddy.

Analysts say Praveen Kumar’s entry would play a spoil sport with whatever little chances Sharmila party would have to make its presence felt in the next elections, because most of the voters Sharmila has been planning to attract might turn towards the BSP.

“Hitherto, there were some calculations that Sharmila’s party would have chances of winning half a dozen assembly seats, if not more, particularly in Khammam and Nalgonda districts.

But now, the chances are bleak for her as Praveen Kumar is focussing on polarising the SC, ST and BC voters in the state,” an analyst said.

If Sharmila has to sustain her party in the state, she has to adopt an aggressive approach, pool all her resources and come out with innovative strategies.
Otherwise, she would end up like what Jana Sena Party was in Andhra Pradesh in 2019 elections.

On the other hand, many officers from the All India Services have previously taken such a plunge into politics. But Most of them did so only after retirement. Former IPS officer PV Rangaiah Naidu entered politics shortly after his retirement and successfully contested from the Khammam Lok Sabha constituency, besides becoming a Union Minister in PV Narasimha Rao’s cabinet in 1991. Another police officer and former director of CBI K.Vijayarama Rao also tried his luck in the Khairatabad Assembly seat, became victorious, and joined the Chandrababu Naidu’s cabinet in 1999.

Most civil servants enters politics through a party with a strong base and strong chances of capturing power so that they could get plum posts post elections. Praveen Kumar is different. The party he joined has no base in Telangana. It has no history of getting sizeable votes anywhere in the state, even in combined Andhra Pradesh. There have been only two occasions when BSP nominees got elected to Assembly. BSP candidate L. Raja  Rao  was elected to the Assembly from Visakhapat-nam district in the 2004  elections, largely due to his personal image.

Interestingly there were 10 registered parties in the 2004 Assembly elections. Two Congress leaders A.Indrakaran Reddy and Koneru Konappa got elected to the Assembly from Nirmal & Sirpur Kagaznagar respectively on BSP tickets, as they could not get tickets from their parent party. But they joined ruling TRS, in the name of merger, for better political prospects. Indrakaran is now Minister for Endowments in K.Chandrasekhar Rao’s cabinet.

Praveen has a tough agenda. He will find it difficult to keep the SCs united. Everybody knows that the issue of categorisation of quota for SCs has created a wedge in sub-castes of SCs.

There is a strong link between categorisation of quota for SCs and upper castes ‘ plans of thwarting efforts for unity among them.

Former BSP late chief Kanshi Ram had visited AP and concentrated on the elections 1994. As per his assessment then, BSP would be the deciding factor in 100 Assembly seats and would get a considerable number of seats.

Yet, BSP failed to registered its presence in AP. Noted Dalit leader who fought for justice for the deceased in ‘Karamchedu massacre’ Katti Padma Rao was the only BSP nominee who got his deposit in the Bapatla Assembly seat by securing 21,000 votes.

Chandrababu had to propose a leader from Mala community GMC Balayogi as nominee for the post of Lok Sabha Speaker in 1998. The largest beneficiary of categorization, Madiga caste, did not hesitate to fume at Mala community for opposing the issue.

The Chandrababu government organised recruitment drives as per the new categorisation that provided government jobs for a large number of applicants from the Madiga community that has become heartburn for the opposing community. In this way, the wedge between the two principal castes of the Scheduled Castes widened and this ‘divide and rule policy ‘ came in handy for political parties dominated by upper castes to exercise control over SCs.

Transforming whole sections SCs into an organised force is going to be an uphill task for Praveen Kumar. Since the Madiga community is predominant in Telangana State, it is simply not possible for him to bring the two castes together.

Praveen may be pressurized to field party nominee in the forthcoming Huzurabad bypolls, though BSP has no strength there.

Preparing the party for the big electoral battle of 2023 may be an ideal programme for Praveen. A lot of money will be required for electoral battle and maintenance of a statewide organization.

People will be curious to see how he gets heaps of currency bundles without getting patronage of corporate giants! Only time will tell whether he will be a calf among lions (TRS, Congress & BJP) or a mighty ‘elephant’ among the same! #KhabarLive #hydnews