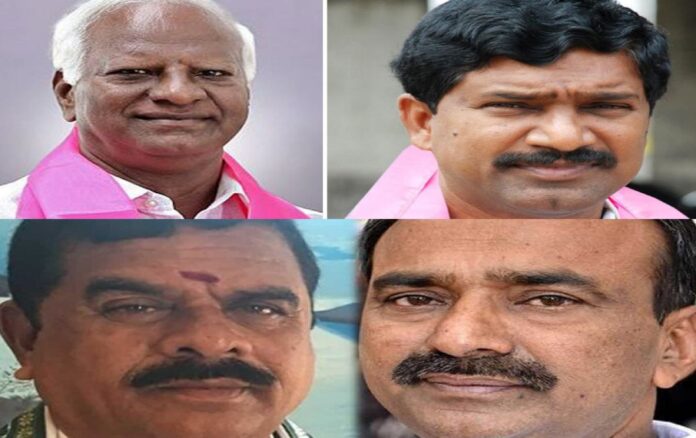 The recent actions and reactions with backward class leaders in Telangana politics makes the headache to TRS supremo Chandrasekhar Rao. The calculated and pre-planned actions striking back with reverse actions makes confusion in the party leadership.

Will the image of Telangana Chief Minister K. Chandrasekhar Rao take a beating because of the calculated, timed ejection of Health Minister Eatela Rajender?  Will Eatela’s social background as a popular Backward Class leader propel his plans? What are the reactions of Telangana protagonists on the removal of Eatela, who has played a vital role in the state administration while holding key portfolios like finance and health?  These are some of the searching questions in the public domain.

Telangana’s social fabric comprises sizeable backward and weaker sections. Due to lack of political representation and dearth of strong leaders within communities, power has not gravitated to these sections.  Still, some representatives of the Backward Classes have managed to get plum posts, though they are largely at the mercy of their political bosses who value their ‘leadership’ quality on the basis of their hold on BC communities.

If anything goes wrong on the part of such representative, he or she has to pay a heavy price, which includes being stripped of their post without notice.  This explains why Eatela had to go.

In his first innings as Chief Minister of Telangana, KCR sacked then health minister & pediatrician by profession Dr. T. Rajaiah of the combined Warangal district for reasons which were not perceived by others as serious. The grapevine has it that KCR considered setting up a University of Health Sciences at Warangal. However, before KCR could himself make a formal announcement, Rajaiah jumped the gun and revealed the CM’s plans.  So, KCR got rid of him, while people thought that Rajaiah was being taken to task for the high number of swine flu deaths recorded then. In political parties, particularly in regional outfits, the fate of ministers and legislators can change overnight.

The sacking of Rajaiah did not affect KCR as the head of the government, though he had reneged on his promise of making a Dalit the chief minister of India’s youngest state. This promise rallied the community and brought them under the TRS umbrella during the movement for statehood to Telangana. The talk of a ‘dalit CM’ is now a closed chapter.

For KCR, things may not be so easy with regard to Eatela’s ejection because of the latter’s social background. Eatela is believed to be in touch with various sections of Backward Classes.

Eatela has previously spoken about his being among those who ‘own’ the Telangana statehood movement as well as the Telangana Rashtra Samiti, while characterizing  people of TS as ‘shareholders’ of the movement. This comment singularly disturbed KCR’s mind. So, despite being a staunch follower of KCR for over two decades, Rajender got distanced.

Perhaps, the overall outcomes of elections for ULBs and RLBs, including the bye-election for the Nagarjunasagar Assembly constituency, may have emboldened KCR to take on those flexing muscles within the party.

Eatela, one among them, has created a sensation by stating that he would not hesitate to resign from the Assembly after having consultations with his constituents in Huzurabad — his home turf since 2004. Should he resign from the Assembly, it would necessitate a bye-election at Huzurabad. In such eventuality, the split, if any, among Telangana forces that had fought to achieve statehood for T-region would be wide open.

Eatela’s removal would have a tremendous impact on those who had worked for separate T-state under the leadership of KCR.  Persons like Prof. Kodandaram, of course, have always described it as ‘collective leadership’. Prof. Kodandaram steered T-joint action committee and KCR himself followed its line, particularly during the period he weathered ‘continuous disturbances’ created by the then Congress government headed by Dr.YS Rajasekhara Reddy. On one occasion, YSR ridiculed Rajender, who was floor leader of TRS then, for his claims of public support in Telangana region. Pointing out that TRS had won only 10 seats out of the 50 it contested then, YSR suggested that Eatela should feel ashamed! This high-voltage political scene unfolded on the floor of the House, and Telangana protagonists, including KCR, came down heavily on YSR’s remarks.

In a way, Eatela has been humiliated by two chief ministers on two separate occasions. If it was ‘arrogance’ of YSR then, how can it be ‘not arrogance’ of KCR now?  Is it acceptable for Telangana protagonists to set aside the humiliation of a son of soil?

Eatela has good rapport with the Reddy community. He is married to a Reddy woman and got alliances for his two children from the same community. Naturally, he could get support from the powerful Reddy community. The Congress party, which granted Telangana State, had faced electoral debacles at the hands of KCR in two successive elections – 2014 and 2018. The grand old party needs considerable support from BC communities. The Congress may be weighing the pros and cons of the emerging political situation!

It would be a gripping political drama if, in the days to come, the Eatela episode paves the way in Huzurabad for a situation akin to the 2006 Karimnagar bye-election!

Remember that KCR’s TRS got rejuvenated following the resounding victory in the Karimnagar Lok Sabha constituency in 2006. That win altered the course of T-movement!

On the other hand, Telangana Legislative Council former Chairman Swamy Gowd expressed his dissent against Chief Minister K. Chandrasekhar Rao in his own way after Health Minister Eetela Rajendra by raising the bogey of empowering the backward classes.

Rajendra caused flutter in the ruling party circles immediately after KCR or Chandrasekhar Rao returned to power with a thumping majority in 2018 state elections by saying he is one of the “real” owners of the Telangana movement who toiled to achieve a separate statehood for Telangana . As he asserted, Eetela was one of the veterans of the separate statehood movement who went hand in hand with Chandrasekhar Rao till the state was realised in 2014.

Swamy Gowd opted for a different idiom to express his displeasure against his party patriarch—praising KCR’s bitter rival A. Revanth Reddy of the Congress party. Gowd, member of the TRS party’s highest body of politburo, described Revanth from the upper-caste Reddy community, as a committed supporter of Backward Classes like a hand stick for the weaklings. He made this observation at a function held in connection with unveiling of a statue of Sardar Sarvai Papanna Gowd in the state capital recently. Papanna, a 17th century king of Quilashapur, became an icon of Telangana’s backward Classes by revolting against Mogul emperors for imposing tax on toddy, a source of living for the Gowda community. KCR’s rivalry with Revanth Reddy is so much so that the Congress MP was jailed on two occasions—in a vote-for-cash scam and in a case relating to use of drones to photograph the farmhouse owned by KCR’s son K.T. Rama Rao in Ranga Reddy district.

Earlier, Swamy Gowd launched a veiled attack against KCR regime, saying the BCs who constitute more than 50 percent of the state’s population have been denied their due in power sharing as power continued to remain in the hands of a few upper-caste people in the last six-years of TRS rule since Telangana was carved out.

Both, Eetala of Mudiraj community and Swamy Gowd from Gowda community, are prominent BC leaders in Telangana. Swamy Gowd, who began his career in the state government as a peon, gave up his government job and took a plunge in the statehood movement by leading the Telangana Employees JAC. Later, he went to the state council from a graduates’ constituency to become the first chairman of the legislative council of the new state of Telangana. His term expired a year ago and uncertainty prevails over his re-nomination.

ALSO READ:  Now, BJP Focus On GHMC Elections To Strengthen Its Base In Hyderabad

Rajendra’s dissent ended like a storm in a tea cup after his retention in the state cabinet with his health portfolio unchanged in a reshuffling of ministers. Swamy Gowda’s utterances obviously do not carry much weight after he demitted his office. But the TRS leadership is worried over the impact of his dissent voices on BCs in the face of by-election in Dubbaka Assembly segment.

Chandrasekhar’s party is forced to make friends with the BCs given the rude shot it received in the Parliament elections in 2019 and the BC card being played out by the BJP. The TRS got alienated from the backward classes, which was evident with the defeat of KCR’s daughter K. Kavitha at the hands of a BC leader D. Aravind. Kavitha had to pay a heavy price for humiliation allegedly meted out to her party’s Rajya Sabha member D. Srinivas, a BC leader from Munnuru Kapu community by the TRS leadership.

Another greenhorn from the BCs, Bandi Sanjay defeated B. Vinod, the sitting MP of the TRS and close aid of KCR. Aiming for a much bigger goal in the 2023 state elections, the BJP top brass made Sanjay president of the party state unit to capitalise on the shifting of BCs away from the TRS.  Vakulabharanam Krishnamohan, former member of the Telangana state BC Commission, dismissed the talk of BCs receiving a raw deal during the KCR government. He recalled that it is because of KCR’s largesse, two BC leaders—Madhusudanachary and Swamy Gowd—were made the first speaker of the Telangana state Assembly and the first Chairman of the Legislative Council respectively.

Gujju Krishna, vice-president of the Backward Classes Association, said the six-year rule of the KCR government left the BCs disheartened. KCR failed to translate his word into a deed regarding welfare of BCs which included fee reimbursement for students, loans with 80 percent subsidy from the BC Corporation and strengthening of MBC (Most Backward Classes) Corporation with sufficient funds, he said. #KhabarLive #hydnews